Sony Japan has announced that it will ship samples of their mini digital television broadcast tuner will ship soon. The new module will be used by manufacturers to enable mobile phones and PDA's to receive broadcast TV. 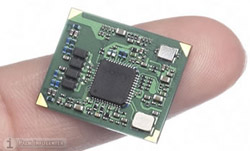 The "BTD-ZJ611" tuner is smaller than a postage stamp and has a digital interface for simple integration into other digital devices as a PDA, laptops and mobile phones. Sony says the module is the smallest of its kind and has the lowest power consumption.

Samples of the module will begin shipping in December. It will sell to manufacturers for 50,00 yen, or approximately $445.

Sony showed a concept TV Tuner Memory stick at the last CeBit. The product was a concept mock up and Sony has not announced any devices that will make use of the new technology. Sony also has standard analogue TV broadcast chips in the works. The chips were unveiled in October of 2002, however no new information is known at this time.

JonathanChoo @ 9/26/2003 6:31:11 AM #
this wont work (atleast with the current hardwares). Digital TV broadcast in Mpeg2 (DVD quality). I don't see how a low resolution screen plus ARM processor is able to decode it unless they fit a separate powerful video encoder. In the UK we get more than 20 free digital channels plus 20 radio channels (not DAB). It's not bad and it has a future just now now.

How big is that board?

Wow. Thanks Sony. I've wondered why this was not possible. Especially with the digi-TV changover coming.

also keep in mind digital tv isn't required in the US until 2005 or something, so there is plenty of time for the prices to drop.

doctor__no @ 9/25/2003 3:04:14 PM #
The price is for "SAMPLE" chips;
i.e. chips that will find it's way into pre-production prototype machines. That is obviously not the price that the manufacter will be paying for final product.

When the chips hits mass-production then the price will come down for mass consumer market.

phoneboy @ 9/26/2003 11:50:29 AM #
Actually, digital TV has been broadcast in most markets for years, and is currently in all markets. The deadline you're referring to in a few years is the phase-out of analog broadcasts. (Right now they are simulcasting in analog and digital.)

Considering what is required to do this, I think it's a remarkable achievement.

And just think, they can sell those lens things from the 1950s to folks with B&W screens to simulate color!

I also think you get the point, Tommy Tech.

Coils or no, there is still alot of miniaturization goin' on.

There is much more information in a television signal than with a voice signal, even in stereo.

Strider_mt2k @ 9/25/2003 7:20:23 PM #
I didn't know there were so many people here that have experience purchasing high end prototying samples for manufacturing development!

But aren't the days of free analog TV broadcasts coming to an end? Won't we end up with TV tuners and no broadcasts?

5 days until the Tungsten T3 hits the market! I have a great feeling about this one!

Pair this up with a closed circuit, wireless video servellance system or better, have the PDA controm cameras (the joystick on the Z71 would be great for this) and you have a winner.

PDAs are not passive, "just watch it" tools. It needs to be interactive and that is not just switching channels.

Have portable TV sales gone down or up of late?
I think up.

Based on this information, I think we'll see the TV thing happen as soon as it can. there's too much money in it!

RhinoSteve @ 9/26/2003 4:26:45 PM #
Nope, the reality is that portable TV sales have been down steadily for the past few years. This is why I'm questioning why they are doing this. I can only think they are trying to "PDA-ize" the handheld TV market.

I would think that another way to get advertising to people would drive this a bit as well though.