The new Clies just announced this week in Japan have now also been announced in Hong Kong. The Sony Style HK site has full details and information about the TH55, TJ37 and TJ27 Clie handhelds in English. 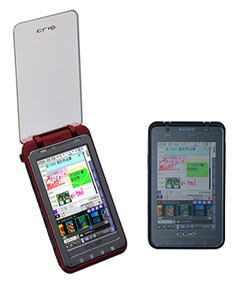 The website has a feature overview of the new Clie Organizer software, full specs of the devices, movies and other marketing material in English. There are also a number of photos and examples of applications for the new models.

The TJ37 has a 320x320 pixel, 65K TFT color screen and a built in 300k pixel VGA camera on the back. For number crunching is has a 200 MHz Motorola i.MXL dragonball ARM processor. For memory the model has 32MB of RAM (of which 23MB user accessible). It also has a IR port, stereo headphone out jack and a Memory Stick slot. 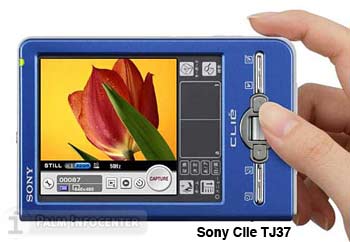 Could this be the Close to Ultimate CLIE?

No Bluetooth, the RAM should be at least 64K and it should all be wrapped up in a phone.

I'm still hoping for only one device.

And if you want a phone grafted to your PDA, get a Treo.

And if you have a phone, why would you even want WiFi?

And each of these will work just fine with the new Minolta camera I got today.

You fiend! Popping my lust bubble!

Do any of them have a transparent flip lid?

Can any of them do over five hours of WiFi?*

Will any of them have a JogDial (OK, dammit, even a Roller!)?

I've found the D-Pad on my T3 (and the T1/T2 before it), while not completely replacing the Jog Dial, go a long way towards it. I haven't miss the jog as much as I thought I would.

For that matter, a 3rd party app to customize toolbars (add functions, hide any that aren't used, etc.) would be fantastic... I'd love to have a mini-battery icon on the toolbar of my T3 and not have to tap the time to see it, and have it not change color in some apps...

Moose Man @ 2/5/2004 7:43:11 PM #
This new datebook clie organizer software has my interest peaked.....and I'm getting tired of opening and closing my T3 to see the whole screen which is what I want most of the time anyway.

You don't HAVE to close it everytime, but on the same token, you can usually see all you need while in the compact mode. The "T" is for transformable... it can be big or small depending on your tastes.

It does sound like the TH55 would be more in line with your preferences though.

Wollombi @ 2/8/2004 10:46:35 AM #
Hey Mike, just a thought here. I've had a couple of PDA's that provided the functionality I wanted but I didn't like it's appearance. The HE330 was one of them (although it's appearance did grow on me over time). IMHO, a good solution/compromise is to buy a nice case. I like flip-up lids, so I generally get one from E&B or Vaja, depending on how much money I have at a given time. Both cases have turned out to be elegant solutions.

I know you're in love with this Sonly, though. I was just offering a suggestion if you just happen to not like it once you get your hands on it. =)

Hmm...that reminds me, I wonder how the case makers will adapt to this thing, given the funky position of the front buttons and back jog dial?

Tuckermaclain @ 2/5/2004 8:02:04 PM #
Looks sweet. When I broke the screen on my Z-71 I replaced it with a T3. Love the ripping-fast CPU, but not the slider or the battery life. This looks like a good compromise, even though it has the dubious distinction of using the slowest OS5 CPU to date. I just bought an m500 for a backup and realized how very painful it is to go back to a slower unit. Still, I would have bought this if it were available. Kudos to Sony for such a well-balanced product.

I don´t understand Sony why they excluded BT from the US version. Adding a BT chip costs nothing and they had to do the R&D for the european version anyway. The target group for this PDA are people who for sure have or will buy Mobile Phones with BT. The target group is the same for the US and Europe.

I think Sony hit a homerun with the Clie TH55 and it´s new PIMs. The only things I would like to change are:
- SD cards instead of the memory stick
- exchangeable batteries

Anyway It will be a huge success!!

a_nonamiss @ 2/6/2004 5:03:50 PM #
The largest two mobile carriers in the US (Verizon and Sprint) still do not support BlueTooth. I am not really sure what the holdup is. My sales VZON rep keeps hinting of rumors of a BT GSM phone, but it's been over a year since he's been telling me that, and I don't know what VZON is currently doing to improve their GSM network support. I know they are building one, but word is, it's only available in large metro areas. I keep hearing that no CDMA phones support BT, but I tend to think that the two largest carriers in the US could exert at least a little pressure on the manufacturers to change that. That is, unless there's some technical reason CDMA phones don't support BT. (Maybe a conflict in frequencies or something?)

I agree though, why can't any CDMA carriers implement Bluetooth?

Stays in my laptop bag as a "mobile WAN access point".

I think those who were complaining about its processor need to stop a this point and weigh playing really processor intensive games for 2 hours vs having a reliable, top of the line 320 x 480 screen palm pilot with very respectable speed and battery life for all the less intense card/board/thought games they'd want to play and still be able to get work done with it before recharging for the night.

That's the cause of most of the complaints: It'll suck for games.

But I don't plan to play CPU-taxing games, so it's a damned good machine for me.

I just hope that when it comes to running real WP (Textmaker, WordSmith, or QuickWord), I won't regret these words...

Do these work smoothly on a UX? Has anyone tried large Word/Excel-files on a UX?

madmaxmedia @ 2/6/2004 6:04:21 PM #
Go check out Cliesource.com. Most UX owners report significantly slower performance on office-type apps, so the TH55 will likely be slower too.

phoneboy @ 2/6/2004 8:01:02 PM #
I run native office apps on my UX-50 using DTG6. It does pretty well. Simple Word docs and Excel spreadsheets open right up. Larger sheets take a moment, but nothing inconvenient. Sure, the T3 I had for a while was faster, but not by as much as you'd think. (Converted docs still run faster.)

I love the handheld engine. It's the same philosophy as a Pentium M chip, or a turbo charger on a car: power only when you need it. I love that I can play MP3's on my UX-50 for hours and hours, where I couldn't on the T3.

Cuz a large market of T615/T665 owners will probably be eyeing this having held out from the awful developments in Clie history sense then until now (tiny thumboards, monstrous sizes, mediocre battery life, medicore to awful pricing, small screens on biz oriented PDAs)

This would be me for one...

HoPpeR @ 2/7/2004 6:05:35 AM #
There is a third party program that was put out to fix the problem with the T3 getting hung up after media clips, but they also added a setup where you could set the bus speed and processor speed for each application. I found that by dropping the processor speed down on all the applications that didn't need it, I could easily triple the battery life from my T3. The software was free and it still worked fine after Palm put out the bug fix. I would say that this program should be a must have for T3 owners. I think the name of the program is T3 Optimizer.

Bluetooth really sucked the battery life out of the T3 and it is easier on batteries than WiFi. I really need WiFi for some software I am developing for sale and if a user can only get 1 hr of use out of WiFi or Bluetooth, it is pretty worthless to me. I think that the Sony TH55 looks like exactly what I have been looking for. I do wish it had bluetooth built in. I suspect that this is a marketing ploy. Release a later version in the US with Bluetooth and get all the suckers that have the TH55 to buy the new one. Bluetooth is also much more common in Europe where GSM is the norm. I suspect that Sony's marketing people decided that leaving Bluetooth out of the Euro version would inhibit sales. Unfortunately, this is how the decisions are made on these type of things in the bored rooms of corporations.

This is my first post here so I would like to also just say hello to everyone. I hope that this forum will help educate me and that I can give something back. I am pretty new to the PDA scene. I got my first on about a year and a half ago. Since then I have been working on how to produce and supply custom programs to industry for use on factory floors. I own a business that works with instrumentation and controls and I see this is a natural evolution for my company.I want to put real time info into manufacturing production managers pockets. I can think ofmany possible applications. On that note, I would welcome feedback and suggestions if anyone wants. Hopefully that statement did not violate the TOS for this message board. This was not meant to be spam and I hope no one sees it as such.