The company will position the smartSD Card as key to realizing the "ubiquitous network society" and will strive to create new business opportunities not only in the device sector but also in the system and solution service sectors. Sample shipments of the smartSD Cards will commence in December 2004. Commercial shipments are expected to follow in the fall of 2005. 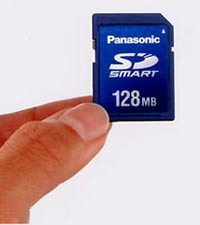 Smart cards are rapidly expanding into many new markets including finance, transportation, distribution, industry and government administrations and have been introduced in a wide variety of applications such as transport ticket payments, access control, electronic money and credit cards. In 2003, some 51 million smart cards were issued in Japan and the number is expected to rise to 340 million by 2010.* Meanwhile, since the introduction of the SD Memory Card in July 2000, 220 makers have announced over 2,600 SD Memory Card-compatible products and approximately 41 million SD Memory Cards were sold in 2003, attaining number one global market share in the memory card industry.

As smart cards become more convenient, the need for greater data capacity and high security has increased. The smartSD Card combines the advanced copyright protection, portability, and easy connectivity of the SD Memory Card with the convenience of a contactless smart card, allowing the card to send/receive large amounts of data at high speed and with high security, thereby supporting a variety of new applications.

The smart card in the smartSD Card uses non-volatile FeRAM (ferroelectric RAM), which enables high-speed data writing, five times faster than conventional EEPROM-based smart cards. The large-capacity flash memory in the smartSD Card can be used as an extra storage area for the smart card module and the stored data is protected by cipher technology. The secured extended memory also transfers data at the rate of about 600 Kbytes per second.

I dont get it

mad212 @ 10/4/2004 10:28:26 PM #
you walk into walmart, their rfid scanners pick up your info, and try to sell you the latest specials on your palm/cell, lol. I am really against the main use of rfid, its just spells trouble. And walmart is seriously pushing the use of it. Basically, you could enbed a rfid into a shirt, and when this shirt is purchased your info tied into it. Walking back into walmart with that shirt would allow there readers to pick this info up. Minority report anybody? Well the other use is not bad, lets say those "shirts" were runing low, the computer could auto purchase more shirts.

in the sd card, i assume it would be usefull for computer security, holding your key to the computer, plus your data. I wouldn't mind taking a 8gb sd card to work, use it to sign in, then access my work, and then have the convience to take it home. Other then that, hmmm....

When the chips are down, the buffalo is empty.