Bejeweled 2 Gets A Big Update 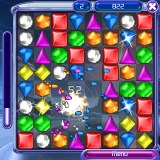 Astraware has released a major update for Bejeweled 2 for Palm OS and Windows Mobile devices. This is the first major update in a number of years for the extremely popular PopCap title.

In version 1.30, Bejeweled 2 adds much-requested support for 240x240 square screen Windows Mobile devices such as Palm Treo smartphones and includes support for 320x320 Windows Mobile Professional and Classic devices such as Samsung's SGH-i780 smartphone. The game has also been brought fully up-to-date on Astraware's current games framework and controls have been optimized for play with either 5-way or stylus.

Bejeweled 2 from Astraware takes the classic game of gem-swapping to euphoric new heights. Players must match the colored jewels in lines of three horizontally or vertically to clear them from the board. Lines of four jewels are awarded with a Power Gem whilst lines of five award the much sought-after Hyper Cube. Both special jewels trigger their own unique jewel-clearing devices.

Bejeweled 2 v1.30 is available now for Palm OS and Windows Mobile. It comes with a free trial period and costs $19.95 for the full version. This latest update is free for existing customers.