If you were asked to name a problem endemic to todays omniscient mobile devices, theres a pretty good chance that youd nominate battery life. Modern smartphones are being used for more and more of our daily computing needs, and with manufacturers striving to satisfy the markets craving for ever-thinner designs its more often than not that the battery is first thing to buckle. Such was the case with Palms latest GSM smartphones: the Treo 680 and Treo 750 both debuted with... uh... adequate... 1200mAh batteries  a 33% cut from their fatter predecessors.

Sure, the smaller battery wasnt all bad: it made the notoriously hefty Treo much more comfortable to hold, and the difference was definitely noticed in the pants. (Pocket!) But as the day wore on, power users found themselves watching that rapidly-depleting battery meter with an inverse amount of panic. Now, finally, Seidio have released a high-capacity 1600mAh battery that boosts the Treos stamina without adding an ungainly hunchback. How does it perform? Grab your safety goggles, don your lab coat and watch out for the gold-plated Yankowski-bots - they're just for reassurance, folks - as we take a tour of PICs top-secret testing range... 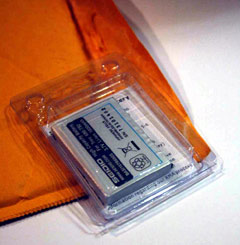 In a nice change from the impenetrable heat-sealed packaging that is typical for accessories nowadays, the Seidio Extended Battery comes in a small plastic container that pops open without any assistance from knives, scissors or your teeth, and doesnt leave any of those wicked jagged edges that are just waiting to slice your hand open. Inside are the battery and a scrap of paper with charging instructions and warranty info. Refreshingly or annoyingly, depending on your English abilities, in one language. Itd be nice if all accessory packaging was this economical.

The battery itself comes in a cheap-looking casing that doesnt look half as nice (well, as nice as batteries can look, anyway) as the curvy enclosure of the stock battery. The label on mine wasnt properly stuck down and curls up at the edges. (See photos for the full horror show). Fortunately, its not like its going to be staring you in the face all day, unless youre operating your Treo back-to-front, which would be both foolish and impractical.

The instructions advise you to allow 8 hours for initial charging of the battery, although mine got to a full charge in two. Performance will increase after 5-6 full charges, according to the manual post-it.

Tighter than a ducks rear 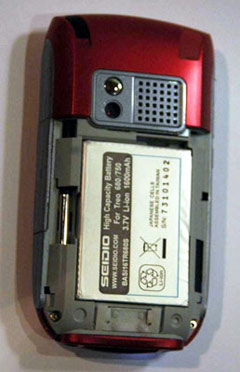 Seidio have done a great job slimming down all this power in order to shoehorn it into the 680s shallower-than-Paris-Hilton battery slot. It looks barely bigger than the stock battery, and only protrudes ever-so-slightly out of the compartment, as you can see in the photos. Its still a very tight fit, both for the slot and the cover. After Id installed it I was actually worried that the cover wasnt fitting on and I was about to break it  you really have to exert a lot more pressure than usual to get it to click back in place. The biggest irritant: said tight fit makes Palms new tilt-the-battery-to-reset technique even more annoying than usual, as getting the cover off and levering the battery out of the compartment will sometimes usually require the Jaws of Life. (Please bring back the reset button, Palm.)

Post-installation youll notice a small, but substantial increase in device weight. Its quite surprising how much difference such a miniscule gain makes: it weighs down your pocket more and isnt as comfortable to hold for long periods of time.

But on to the real question: how much of a difference do those extra 400 milliamp-hours make?

A Battery Of Tests*

(Please note: these tests are hardly scientific and probably riddled with mathematical errors that could tear a hole in the space-time continuum if they were spoken aloud. Take with a shaker of salt.)

After Id used the battery for a week with near-full daily charges, I figured it was sufficiently broken-in to subject it to a series of consumption tests. First on the agenda was a standby test: how much longer are you going to get out of the extended battery when its doing nothing? So, I left my 680 turned on overnight - once with each battery - and recorded the results when I woke up approximately six hours later. Give or take a yawn or ten...

Nearly double the standby time? Yes, thats an impressive way of putting it, if you ask me. And I wrote it, so I should know. But I digress; I should point out that these results may vary wildly from user to user, depending on a whole bunch of things ranging from cellular reception (a low signal gulps more power), to whether youve got Bluetooth on, and whether youre running any kind of background programs. We can clearly see, however, that the extended battery wipes the floor with the stock version.

Okay, so enough about standby power, which isnt that interesting anyway since most of us get these devices so we can actually, yknow, use them. How does the Seidio battery stand up over a period of heavy usage? For my second and final experiment, I subjected both batteries to a gruelling three-hour testing regime that sucked them down like electricity was being banned at midnight. I then extrapolated how many hours of heavy use youre likely to get out of each:

These tests would have gone on longer, but six hours of fiddling with my phone was tedious enough. And I was seeing the 4.30pm session of Die Hard 4, which was good, but not great, IMO. At least they didnt completely screw up the series. But what was I talking about? Oh yes: batteries. Whats the final verdict?

When the Treo 680 was released, it was so depressing to get an upgrade that corrected nearly all the flaws of the Treo 650  well, except that 2.5mm jack  but required such a huge compromise in power. It marred an otherwise excellent smartphone. Our options were limited: you could either cut down your usage  which, for some, is like trying to give up going to the bathroom; you could carry a spare battery or charger  inconvenient, unless you carry a purse European carryall; or you could replace it with a bigger battery & cover, The Rumpshaker  which ruined the lovely new form factor and didnt fit your cases to boot. Palm themselves tacitly acknowledged the issue, with the new Treo 755p featuring a beefier 1600mAh battery.

Now theres a fourth option: upgrade it. With no unsightly rump and a forgivable increase in weight, youll be over the change in no time and should greatly appreciate the extra confidence that knowing your phone will last the day (and night) can give you. The price is unfortunately high  double the price of the stock battery  but if youre a heavy user then its worth twice its weight in gold. Its not a spectacular increase by any measure. But its very welcome.

Hey, that was a well done article and interesting read, and I don't even own a Treo.

These guys really "do batteries." I'm already imagining the first Seidio "rumpshaker" extended battery for the Foleo. "Double your Foleo's computing time! And it doubles as a handy carrying grip."

(blushes, bats eyelids) You're too kind, sir.
On the subject of a Foleo handle: it could actually be a good idea for future models. (maybe not as part of the battery compartment, though... ;) )Although it was rarely used, I used to really appreciate the handle that was built into the back of the Nintendo Gamecube. Cute and clever.

There won't (and should't) be a "rumpshaker" battery for the Foleo for one very good reason. Unlike most laptops, the Foleo is designed with the battery compartment along the front edge of the device--not a place you'd want tilted up.

When I find out who made the decision to do this I'm going to buy them a beer the next time I'm passing through Sunnyvale, because it's brilliant in one of those "so simple why'd no one ever think of that" ways. See, if you have the weight in the front you can open the lid with one hand and the bottom stays right on the table. After years of having to pry open every laptop I've owned with two hands it feels like there's some weird magic in the hinge design of the Foleo every time I open it. The hinge is high quality--it stays firmly in any position you put it--but the magic is in the placement of the battery. Somebody's been reading Archimedes!

There's also no ugly, fidgety latch on the Foleo (I'm looking at you, Dell, Gateway). Just as the lid is about to completely close you can feel a very slight tug of what must be some small magnets inside the enclosure. Then it shuts with a small, firm thump. I'd have thought the magnets would have prevented the one-handed opening, but their force and the front-weighting of the keyboard are calibrated just right.

Sounds trivial, I know, but wait till you try it. It's that thing you hear craftsmen say about how their favorite tools are "perfectly balanced."

I'm at war with myself over the Foleo. I've decided that I could definitely put one to good use as a writing tool, and all the reports are saying that the build quality is great. But $600... ugh. It'll be just as expensive as my Treo 650. And I swore to myself I was never going to pay that much for a gadget again, no matter my what my inner materialist said. Now it's happening again... that little voice that says "Go on, splurge! Want it! Need it! Buy it!"

It's hard to shut it up.

There won't (and shouldn't) be a "rumpshaker" battery for the Foleo for one very good reason. Unlike most laptops, the Foleo is designed with the battery compartment along the front edge of the device--not a place you'd want tilted up.

Looks like we'll need a new name to replace Rumpshaker then. How 'bout "Codpiece"? ;)

> ...you can feel a very slight tug of what must be some small
> magnets inside the enclosure...

I'd think they'd just use a little spring-activated cam instead of magnets. Did you try playing with a paperclip and see if it stuck anywhere?

the Foleo is designed with the battery compartment along the front edge of the device--not a place you'd want tilted up.

Silly me, assuming it was by the hinge. I've got two laptops: one's got the battery in the back and the other in the front. So I don't know why I made that assumption. Anyway, does make sense, paticularly in this case (pun only slightly intended).

Do your two laptops behave noticeably different on opening?

Yes, but only because they are two very different laptops. The Dell 700m has an extended battery that sticks out the back, creating a "lever". It also is much smaller overall in size vs. the D620. Given that they both also have "heavy" hard drives and optical drives in different locations as well, it really is a bit like comparing apples and oranges. The hinges are also significantly different in the amount of friction they open with.

I've been wondering if it were possible for a new battery to incorporate a "reset switch" to compensate for Palm's penny-pinching "oversight". Just a little button that temporarily disconnects the battery's connection to the Treo's terminal would do the trick.

^^ I like it. Patent your idea and send it to Seidio - they already make a gazillion variants of batteries and covers anyway, what's one more? ;)