In this quickies update we take a look at some random tidbits and new stuff coming soon to the Palm OS. New packaging reveals a Palm OS SlingPlayer mobile is in the works, we report on a bunch of exciting new emulators including a DOS emu, and a new SEGA Genesis, GameGear. Turbo Grafx, and Atari 2006 game console emulator, Palm's Irish unit has filed for its first patents and much more in this batch of quickies...

SlingPlayer Client for Palm OS?
Gizmodo has posted about a sticker hiding a Palm logo has been spotted on the latest Slingbox packages in retail stores. Sling already supports Windows Mobile Treos. SlingMedia has not released any official information on the Palm OS client of their SlingPlayer Mobile client but this report would seem to indicate we can expect a release soon. -R 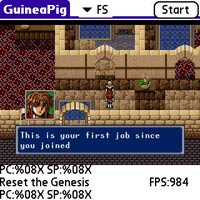 GuineaPig is a new SEGA Genesis/Megadrive, Atari VCS 2600, Mastersystem (SMS), GameGear (GG) and NEC TurboGrafx/PCEngine (TG16) Emulator for Palm OS from CodeJedi. It is in its very early stages but looks very promising. GuineaPig is a freeware open source title. It requires a Palm OS 5 device with a high-res screen and expansion card. -R

Palm Ireland Files First Patents
According to this article on the SiliconRepublic.com Palm's Irish R&D unit has files for its first set of smartphone related patents. In little over a year since its research and development (R&D) operation was announced, smart phone producer Palms 30-strong research team is already in the process of filing its first patents, the companys senior vice-president John Hartnett told siliconrepublic.com. -R

Exact II Updated to v2.23
Deluxeware's fantastic arcade/puzzle title, Exact II, has recently been updated to version 2.23. It is a minor bug fix update that addresses issues with power buttons on certain Treos. If you haven't already, check out the PIC review of Exact II. -Kris

Cake Mania is a new action title that sounds reminiscent of the Midway arcade classic Tapper. The goal of the game is to bake cakes as fast as possible and send them to anxious customers. The game's control scheme can by handled by touchscreen or by the 5-way navigator.

Luxor is Astraware's second upcoming game and looks to be an Egyptian-themed puzzler similar to Bejeweled. -Kris

TamsPalm recently published a preview on a new DOS emulator in development for the Palm OS. The program is a Palm OS port of the well-known DOS emulator DOSBox.

Mobile AOL Mail in Versamail
AOL Mobile has posted a tutorial with step by step instruction on setting up Versalmail with AOL email accounts. This same info can be used with other IMAP compatible mobile email clients.

Movistar Launches the Treo 650 in Peru
Movistar, the leading cellular telephone company in the Peruvian market, and Palm have announced the launch of the Palm Treo 650 smartphone on the Movistar network in Peru. The Treo 650 is available with voice and data plans at Movistar's retail stores throughout the country.

How is GuineaPig new? I had it on my Zire 71 back in the day. GuineaPig been around for years.

Really? It was just brought to my attention and I assumed it was new. I'm sure Jeff doesn't mind the attention.

[short summary; LJP is the continuation of GP which is essentially dead. get Little John Palm (LJP). GuineaPig is actually mroe stable in many cases, but much less fully featured.]

Darn, I see my name so I'd best chime in ;) I've got a number of new freebie/open projects and some ports on the go but I admit I've been quiet of late due both being busy (got a little one coming soon!) and one of my projects not being revealed yet....

As to GuineaPig, it was in fact released back around when the Zodiac came about; it was initially (and hence the name) designed to test how far the DRM went on the device. Since the DRM had potential to prevent homebrew from occuring at all (applications needing the extended graphics hardware API needed to be signed) I built GP as a test to see if a signed application could in turn load shared libs, external ARM objects, and do self-modifying tricks to pass along access to children 'applications', with the blessing of Tapwave. In the end, the public release of GP is just a cheap hack frontend that loads ARMlets from well-defined ARM object files, with the design of doing emualators from a common frontend. ie: It was a menu to list off games from Coleoc, Turbo Grafx, Sega Genesis/MD and other machines, and launch the appropriate ARMlet (PNOlet) to handle 'em. Pretty cool, but only a small piece of its original intention.

GP did really well for a few months, but it was quickly merged/folded/osberved into yoyo's Little John Palm, as they shared the same source for the most part (ie: Both were Palm OS ports of various PC open source emus; GP came first, LJP a little while later.) I was busy with Shadow and other projects, so when yoyo started getting crazy performance out of his work (he pulled in an ARM assembly CPU core for the Genesis emu which was what most people desired at the time, whereas I was using a slower portable C CPU core) then the need for GP slipped; hence LJP took over where GP dropped off.

Industrious folks started pulling in all of GP's modules into LJP; ie: The Atari 2600 module in LJP is ported from GuineaPig for instance. As is the SMS/GG (Mastersystem/Geam gear) module, and others as well.

So over time (years!) GP began, spawned several other projects, and merged/turned-into LJP.

LJP is the superior work, with yoyo kicking it off, but Tinnus doing all the major maintenance over the last year or so.

Long story short -- hit up LJP (Little John Palm) for Palm (or a separate version for Zodiac.. LJZ was quite nifty, though LJP also works for zodiac) and have good times; it has more features than GP ever had, since a number of people put their attention to it :)

(That said, GP is more stable on more devices; its slower in some cases (Genesis, say), but it should work more often since it uses less 'tricks'.. all standard boring Palm OS coding, no magic if I recall; it was a couple years ago though so I forget :)

While I'm at it; for awhile I was writing most of the emulation stuff on Palm OS, but there are many fine coders championing the scene now. Be sure to look into Chrilith's SCUMMVM port, or MetaViews; MetaView (of PalmPDF fame) also ported UAE (an amiga emulator); others have also ported UAE. Myself, you can still get CaSTaway for Atari ST on Palm OS at my codejedi site; I've got Colecovision and a half dozen other systems covered as well. If you look around, there are a lot of emus now, from a lot of people.. good times for retro-gaming. (We are all assuming you're getting your games legally; do not troll this comment for legal questions; there are other forums to educate people about the legal and less-so aspects. And, finally, yes, emulation is itself 100% _legal_ in every jurisdiction, _period_.)

I wonder if they are using the Palm logo to say they support the Windows Mobile based Palm devices.

RE: Slingbox for PalmOS

Hi,
nop - Engadget got explicit confirmation that they plan a Palm OS version. Got the same question over at TamsPalm's-...dont ask me why, but people seem tom loose the skill of reading(joke!!)!

RE: Slingbox for PalmOS

I thought it was a reference to the 700w too - but looking on sling's site one finds this:

Support for other platforms

We dont have any official announcement yet. Watch for news in the next few months.

A Beta version of SlingPlayer MobileTM for Pocket PCs is now available. Please visit www.slingmedia.com/slingbox/slingplayermobile.php to find out more.

We are currently doing research to determine which software platforms we will port the SlingPlayer to. We have requests for PalmOS, Linux, Unix, and even Commodore 64! While we can't promise the latter, we are definitely looking into supporting other operating systems as soon as possible.