CRN has posted an article concerning not only the cessation of Symbol's Palm OS product line but also some key background info on Janam Technologies. It states that Symbol is now taking its last orders for its ruggedized SPT1550 and SPT1800 industrial handhelds.

Symbol's interest in the Palm OS has been on the wane for several years as its newest models, the SPT-1800 series, still run OS 4.0 with 33mhz Dragonball CPUs and 160x160 monochrome screens. In all likelihood, Symbol has likely only maintained its Palm OS license this long to service long-term contracts and the large installed device base. 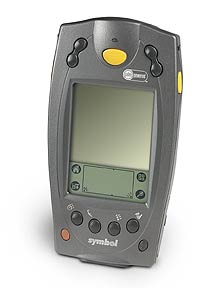 Symbol has notified its customers that its final batch of Palm OS-based ruggedized industrial-style handhelds will ship in January. They claim the decision to terminate Palm OS device production was reached not only due to economic factors but Access' lack of interest in the Garnet OS in the company's long-term plans.

Their EOL announcement is likely to shock and anger many long-time customers who need reliable and affordable solutions for inventory management and barcode scanning applications but may prove a boon to Janam as a new startup. Janam was just founded by two former Symbol Technologies executives, Ron Goldman and Harry Lerner. The company just announced a five year licensing deal for Palm OS Garnet and two new modern barcode-scanning handhelds.

CRN's article also interestingly gives rough sales figures for Symbol's Palm-powered devices over the years as well as some approximate price points for Janam's various configurations which will range from $995 to $1,295.

What will Microsoft do now?

Just a few weeks ago I was at a conference where staffers at the Microsoft booth used PalmOS-based Symbol devices (SPT1550) with barcode scanner to scan attendee badges in order to capture their contact info. I guess the Windows Mobile based devices either don't have enough stamina or aren't reliable enough to be trusted with critical customer contact info :)

Well, I don't know about Microsoft, but I still see the Symbol devices all the time for this type of industrial/field use. Hopefully the Janam devices will be a drop-in replacement.

I don't think that was Microsoft who was involved in the handheld you saw. Most likely they used Ticketmaster to provide ticketing services for your event and Ticketmaster is a large user of those Symbol PalmOS handhelds.

This had nothing to do with ticketing. This was a Microsoft booth inside the exhibit hall of a larger event where they used Symbol PalmOS devices to scan attendee badges to get their contact info for future spams.

With all this being said, and now that Windows Mobile has a Palm OS emulator program, I would say that the palm OS is going away.

Do you mean http://www.styletap.com/ or some other product? It's not fully compatible with all Palm OS apps (never used it, anyone has feedback?), and I doubt you could easily or maybe even legally run the Palm PIM functions on it.

I'll garantee you a lot of fun when you try to run PalmOS app for 320x320 screen on 320x240(which is very common resolution) WinMobile screen.

So the recommendation is that we buy a Microsoft rugged handheld with all the bugs/sluggishness of the Microsoft OS for literally 2x the cost of a Palm rugged handheld so that we can run a Palm emulator on it? No thanks.

Time to pay up.

p.s. "Concludes" and "Cessation" and "EOL" are such nice euphamisms for "shiit-canned".

RE: Beersie LOSES his bet.

RE: Beersie looses his bet.

I should hope so.