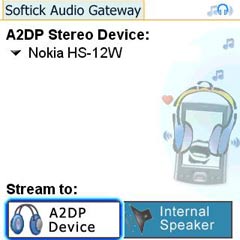 It may not be a new program, but with its latest release Softick Audio Gateway can finally be called "complete". In version 1.12 of the popular Palm OS A2DP app, Softick have added support for the brand spankin' new Treo 755p and finally enabled the long-awaited audio quality controls.

Early versions were somewhat patchy, with frequent complaints about call handling and stability. Have Softick resolved these issues? Is it worth 20 of your hard-earned bucks? Where do babies come from? Read on for the full, gory autopsy. Erm, of the app. Not babies. That would be obviously be completely unconscionable.

The Advanced Audio Distribution Profile (A2DP) has been around for quite awhile now. Simply put, A2DP takes the sound output from your device - PDA, mp3 player, phone, goose, whatever - and converts it into a format compatible with the growing number of ever-increasingly-tasty Bluetooth wireless headphones out there. It's standard on most Windows Mobile devices - even Palm's own Treo 750 - but Palm OS devices have long been neglected. That is, until Softick Audio Gateway (henceforth, SAG) came along last year. The app has steadily progressed since its initial release, adding support for AVRCP (wireless playback controls), compatibility with every Treo model and much-improved (but still not perfect) stability.

So what's new with version 1.12? As mentioned earlier, it now supports the latest member of the Treo family - the 755p - and at long last Softick have turned on the audio quality controls. Like a delicious lollipop cruelly dangled just out of reach of a fat child, the option buttons have been there since version 1, but did nothing when you pressed them. Many an enraged user has raised their fists to the sky and demanded "WHY, SOFTICK? WHY?!", but were met only with the unique silence of a stunned crowd of strangers. Until now...

Warm golden lotion for your ears

Previous versions of SAG had a nasty tendency to crackle around the edges of high-bitrate music. It seemed especially bad on higher-frequency sounds - like a blown speaker. It could be countered with clever tweaking of your equalizer settings, but that was hardly an ideal solution and didn't work terribly well. Much to my satisfaction, SAG 1.12 has banished this problem entirely. But much to my displeasure, it creates a new one. We'll get to that later - but let's start with a look at our new "Quality Tweaks"...

According to Softick's release notes, Faster Analysis was an option used by all previous versions of SAG. If checked, audio is processed faster and doesn't slow down your device quite as much, but quality suffers. To my ears, this seems to have been the primary cause of the crackling experienced in earlier versions and I'm very happy to be able to turn it off. Simple Bits Allocation is way too technical for me to have a hope of explaining - the HYPERLINK "http://tinyurl.com/346t9f"A2DP spec isn't exactly light reading - but essentially provides the same quality vs. performance choice. Generic Stereo Only will disable Joint Stereo encoding, but only insane old-school audio purists are going to care about that one and you're better off leaving it alone. Disable Volume Control is self-explanatory: it disables your Palm's volume controls, outputting a "natural" audio signal and leaving it to your headset to control the level of amplification. This option seems to make a noticeable difference, especially if you're using pTunes, which can be still be a little flaky at maximum volume. Very handily, there's also a pair of buttons you can thumb to quickly change the settings to either "Faster Speed" to "Better Quality".

We also have a new Possible Quality Levels setting along with the original bitrate selection menu and "Disable Filter" option. The filter is used only on low-bitrate files and can be safely ignored by most. The new Quality Levels settings however is quite handy, and at number 7 corresponds to a 368kbps CBR mp3. It'll push your Bluetooth to its limits, providing more than enough headroom for high-bitrate files. With all the top-quality options enabled, SAG 1.12 sounds excellent, and is 99.9% indistinguisable from a pair of wired headphones. But with aural pleasure comes chronic chronological pain... 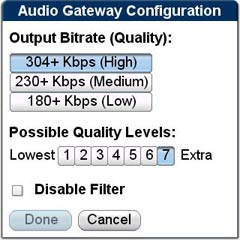 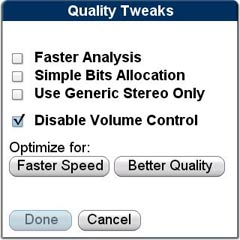 And You Thought Your Treo Was Laggy Before!

Simply put, your Palm will perform like a stuck pig with all the options turned on, and audio will skip frequently as you switch around apps. If you're a hardcore mobile multitasker who needs an instant response from their device, then you'll have no choice but to turn a few of them off. I can personally put up with it, since generally if I'm listening to music then it's in the background to some mundane real-world task, but if you like to play games on your Palm, work on documents or browse the web while you listen then you may want to leave the Faster Analysis option on.

Quite apart from the performance issue - which is really more a limitation of Palm's aging hardware than the app - SAG brings with it the usual host of minor bugs that seem to accompany every new release. For instance, the switchover from A2DP to the Headset profile and back again when a call comes in still isn't handled properly. Normally when a call comes in, SAG will switch profiles without difficulty, but will frequently fail to switch back once the call is completed. Sometimes (albeit rarely) it will stop playing for no apparent reason; other times the AVRCP profile will randomly disconnect.

Unfortunately for Softick, the myriad of Bluetooth headphones combined with the number of (usually incompatible) Palm devices doesn't help matters. Some users report no problems at all; others seem to cop every bug under the sun. This app is definitely a case where your mileage may vary. If you're going to go shopping for Bluetooth headphones then it'd be worth checking out Softick's forums first, where they keep a list of compatible sets.

Back to the original question: is it worth 20 bucks? (And the cost of an A2DP headset?) For my money, the answer is an emphatic yes. It's hard to overstate the convenience of not having to deal with tangled earbud cords and twitchy headphone jacks (yes, I'm looking at you, Treo). SAG 1.12 is a fine update to a great app, but one can't help but wish for a completely bug-free experience. As it is, we now have audio quality on a par with other A2DP solutions and a mostly stable app. 8/10.

Softick Audio Gateway 1.12 is available for $19.95 USD and is compatible with all Bluetooth-equipped Palm handhelds. A free trial version is available. This review was conducted on a Treo 680 with a pair of Nokia HS-12W Bluetooth earbuds.

Thanks for the review. This is an important product for the Palm faithful.

I was wondering if you had done any testing on battery life issues with and without wires. Does the BT radio with SAG consume more or less energy than a wired (Treo powered) pair of earbuds?

SAG definitely consumers more power than a wired headset, but it's still quite reasonable on the batteries. The 2-3 hours I normally use it for every day deplete my battery by about 30-40%, but depending on your settings this can vary quite a bit.

That aint bad at all. Switching to silent mode and engaging the little vibrating alarm drops the battery 35% on my 680. :-D

Seriously tho, thanks for the info. This is something that I would like to try. What headphones are you using? I would like earbuds for my use.

Nokia HS-12W earbuds - a little dongle hangs around your neck, with earbuds at the nape. They're pretty good, but I'm tired of having to reach for the dongle - normally hidden under my shirt/sweater - to change tracks and stuff, so I'm looking at getting a pair of Motorola S9's. They look nice... Ryan should get some in stock!

I just set everything up on my Tungsten T5 to see if it would work.
It does! :-)

I didn't try it with my TX yet though.

So now both my Treo 680 and T5 play wireless BT audio.
The T5 suddenly takes on the perception of much greater renewed value.

I use this software with iLuv i903 Bluetooth noise-cancellation headphones. It works quite well, but if you try to do something else, like work Crosswords or read an ebook, while running this and PocketTunes, expect notable delays opening, running, and quitting other applications.

I bought 1.22 and 1.25 does not work with my serial number as stated. It says thank you for your download, then I click ok and it says error. And as I listen to tracks in ptunes, there is a beeping between track (I assume this is for demo mode). But the performance of the software seems faster. And if I could get it to validate it seems like it has some good updates.

I was excited to try SAG so I could finally listen to podcasts and do phone calls via a bluetooth headset. The trial version works with the Jabra Extreme headset, but even at the lowest bitrate setting for voice, the podcast pauses frequently. And no luck sending or receiving calls through the headset--they just aren't routed properly.

Oh, well. Glad this works for some of you. Hope this is helpful to some.