Palm today reported that total revenue in the first quarter of fiscal year 2008, ended Aug. 31, was $360.8 million. Smartphone sell-through for the quarter was 689,000 units, up 21 percent year over year. Smartphone revenue was $302.2 million, up 12 percent from the year-ago period.

Palm reported its first net loss in more than three years of $841,000, or 1 cent a share. Sales of Palm smartphones slowed during the current quarter, down around 9% from the previous record setting Q4 FY07 quarter.

"The launch of our Palm Treo 500v with Vodafone and the Palm Centro with Sprint in September demonstrate our commitment to delivering competitive, high-quality solutions and expanding our reach to a broader market and range of customers," said Ed Colligan, Palm president and chief executive officer. "As we move toward completing the recapitalization transaction with Elevation Partners, we are excited to strengthen our ability to accelerate Palm's growth in the future." 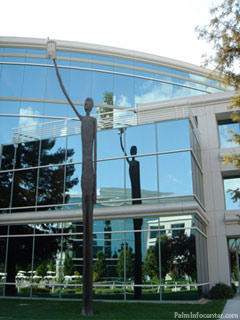 -- SFAS 123R stock-based compensation expense, before taxes, is expected to be between $5.5 million and $6.0 million and amortization of intangible assets is expected to be $1.0 million. We also expect an $8.0 million to $10.0 million restructuring charge to earnings related to product postponement expenses and the organizational changes that we announced in June. These amounts and the related tax amounts are excluded from Palm's second quarter of fiscal year 2008 outlook on a non-GAAP basis.

The guidance provided above assumes no change for the recapitalization transaction with Elevation Partners, which the company expects to complete before the end of October.

I think they did fairly well during this post-iPhone quarter. It could have been worse. Actual adjusted figures actually say a few cents earnings per share.

i am thinking that quarter and this current quarter are the quarters when Palm will feel the effects of the iPhone the most. And the effect of the Foleo cancellation. With the new lineups of phones they came up with, including the rumored 800w, i think we should expect better times ahead.

Palm weathered the iPhone storm in other words.

Now they really have to make that Plinux phone quick if they expect to survive another year.

RE: Palm weathered the iPhone storm

If they had a few PDA models, they would still be in the black.