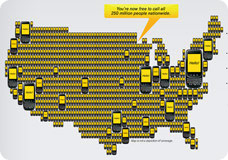 Sprint today added a new feature to its Everything Data plan package, unlimited mobile to mobile calling. With the new Any Mobile, Anytime (non-flash link), new and current Sprint customers will receive unlimited mobile-to-mobile calling from the Sprint Network to any wireless phone on any U.S. wireless carrier network at any time.

This new option is even extended to existing Sprint customers who currently subscribe to an Everything Data or Everything Data Family plan, which includes nearly all the Palm Pre users in the US at this time. Sprint says you will automatically receive  at no extra charge  the added value of Any Mobile, Anytime starting on the first day of the their next bill cycle, with no action or change of plans necessary.

So can I tether my laptop w/out fees now?

RE: and my tether?

The paper said Deutsche, which last week agreed a deal with France Telecom to combine their British mobile phone businesses  T-Mobile and Orange  had appointed Deutsche Bank to advise on a possible tilt at Sprint , valued at $11 billion.

Deutsche Telekom slashed its full-year profit forecast in April, partly due to a weak performance in the United States.

Sprint Is Not Aware of Any Deutsche Telekom Bid: Sources

From a technical standpoint, I think this would be a nightmare. Suddenly, T-Mobile is handling GSM, 3G HSDPA, CDMA, and iDen. This doesn't make any technical sense. AT&T buying Cingular when both were GSM made sense. Get a new SIM card, and you doubled your network size.

This is just a grab for more customers to say that your network is bigger. The end result wouldn't be a network at all - just a parent company, left to foot the bill for a next-generation wireless network.