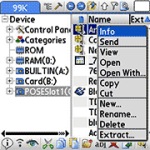 Resco Software has released a major new version of its popular Explorer file manager for Palm OS devices. Explorer is a powerful and feature rich file system browser, image viewer, launcher, zipper, backup utility and FTP/LAN browser with an impressive range of features and customizable options. New features in this version include folder synchronization, a improved zipper with zip file verification and support for more formats (.tar/.tar.gz/.taz/.tgz/.bz2), an improved built in text editor that can now process larger files, image viewer improvements, extended ftp support and a number of other interface and program updates.

does that come with a fellating too?

Each year seems to be a "paid" upgrade. Wonder how crazy it is this time for so few changes...

Paying my annual PDA update tax to Palm since 1997.

Hello,
the upgrade price is about 15$ if you bought RE ever. EVER. Got it?

So, calm down, folks. And get in touch with our support dept for the upgrades!

Yes, well $15 is better and probably should be the regular retail price. You can thank the Apple Store because these days people expect to pay .99 - 4.99 for a mobile application. I like RE as much as anyone, but $30 is robbery for a PDA/Smartphone application. Your talking about a piece of code that's downloaded off the Internet. It doesn't take too long to make what you actually put into an application. If the application is worth it's salt, then it will make money. Before you start talking about how difficult it is to make an application.. well, spare me. It's only as difficult as your knowledge. As for upgrade cost, that is the real joke. Unless it's an all redo of coding then it's really pathetic to charge even half price for an upgrade.

Apple developers are MUCH more realistic than the Palm ones have been, and from the sales figures it appears that some developers of these sub $5 apps are doing very well. The "Palm Economy" has been built on charging an average of $15-30 for applications, even simple utilities like font managers and calculator hacks. Minor "upgrades" have been priced as though they completely recoded the things - when in reality the developer made the app compatible with the latest Treo model - something they're going to do anyway if they want to keep selling... On top of that, the distribution network of selling through a variety of middlemen took a big chunk of the developer's proceeds - and some middlemen never passed along the sales price to the developers...

I've been rallying against the ridiculous churning of "upgrade" fees by Palm developers - if I paid you $20 bucks for your cute game, why on earth don't you just GIVE me the latest version if you are already coding it, instead of trying to get another $10-15 out of me to make it work on the "new" Treo that Sprint gave me because the old one is EOL?? It costs you nothing, and I'm getting smarter and will more often than not just delete your dumb game and do without instead of encouraging "upgrade" churn by sending you a payment.

I own a key to Resco Explorer. Bought it about a year and a half ago. The 2008 version was a "free" upgrade because it was within a few months of when I bought it. But if I were to pay this additional $15 for code they're doing anyway to increase sales to new customers, that's ***$45.00** (FORTY FIVE DOLLARS) within a couple years just to have use of this utility. Absolutely ridiculous. I mostly use the app for accessing zip files (I find the free "FileProg" best for most OS file manipulations), and it'd be great to have access to the expanded archives, but I'll live without the extra functions - as they're not life changing.

It would cost Resco the bandwidth of a few kilobytes to just offer free upgrades to paid customers, the customers would praise them up and down for the value received from a THIRTY DOLLAR investment in the program. But instead, I'll live with the now diminished older version because it suits my needs, and if my next Treo isn't supported by the 2007 version I'll toss the $30 key and buy something else that unzips from a developer that charges enough up front to cover whatever bandwidth deemed necessary to offer the program updates for life.

Ranosoft is one developer that does it right - charges a fair but affordable price up front for his utilities - and guarantees in writing that you will have access to whatever latest code he writes.

I'd rather have 400,000 sales of a net $2.00 than 5,000 sales of a net $20.00. The "upgrade churners" discount the value of viral marketing - I've owned an iPod touch about a month and have nearly shared more info about apps on that device with people than I have in 12 years using Palm apps.

Developers: once your code is ready - wouldn't you rather have more and more people using it instead of working on mortgaging their house to afford their "initial" license and then the annual "upgrades"?

Just read that previous link about the 99c app problems. That pricepoint seems very low and it's an issue that needs to be worked out with Apple. Basically the most "popular" apps are the cheapest ones, as Apple has set up "popularity" of an app exclusively by how well it sells. Obviously, a person will take a chance on losing a dollar more often than they'll take a chance on losing five dollars, so the cheapest apps sell more and are ranked "higher" in iTunes.

It's the other end of the spectrum - competing ONLY on price. iPhone/touch apps also don't seem to allow for free trials as most Palm apps do - you gotta either buy them from a screenshot or a dimished capability "lite" version and hope it's representative.

I have pretty good faith that Apple will get it's act together. I also expect that "Resco 2010" will bring the faithful 2007 purchaser/upgrader up to a $60.00 investment. Dataviz and their "Documents to Go" program are in the stratosphere with versions (12? 13?) even though the Palm's only been around about as many years.

If Palm were REALLY smart (if only) they'd buy out Palmgear or Mobihand and then charge the developers nothing or a 1% fee or something to host and sell - perhaps with the agreement by developers to offer lifetime upgrades to their customers. "Centro Claus" and changing crayola colors on the Centros may get Palm a few customers, but it's the applications and the functionality of the device that makes it indispensible.

If, over the span of a few years, people are paying the price of an Office Suite key for an application that reads Office files on their phone, it's bound to reach a point where the Palm becomes irrelevant and people will just pickup a netbook or other technology, leaving Palm in the dust.