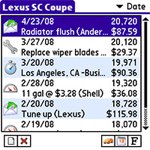 iambic has released a new application for Palm OS devices. Vehicle Manager is an automotive oriented application that enables you to keep tabs on a single car, and can scale up to keep track of a whole fleet. It records a variety of information about automotive vitals as well as recurring expenses such as scheduled maintenances and gas fill-ups. You can also track fuel consumption and fill up history, insurance and registration info, track trips and calculate the cars total cost of ownership. In addition to the mobile client, there is a Windows Desktop version from iambic as well.

Sounds like I might finally have a replaement for the long-unsupported Autobase app AND can get a desktop adjunct to go with it. Now if I can just convert my old data....

From what I recall of Autobase you would have to export to the memopad then you could save it as a .csv file and import into Vehicle Manager. I myself have used Automobile for some time and like the charts that really show a visual of the information. I don't see where Vehicle Manager really brakes any new ground for this type of app.

seems like a lot of minutiae data to manage. do you clip coupons too? life is short.

Well I decided to download the trial and try it out to compare to the application Automobile. I've used Automobile for several years but wanted to give this new app a try. Like most of these auto apps you first set up your vehicles information, this was simple and straight foreword. Now for the 9 months of fill ups I wanted to put in since I bought my last car. There is no import within the Vehicle Manager application, I assume that it is on the desktop app but that did not come with the trial. I noticed there is also no export for data within the Palm application either. So I manually put in (after exporting from Automobile to a .csv file) all the fill up information. I then wanted to see what information was given with all this information. I first clicked on a few individual fill ups and realized that the miles per gallon never is shown. There is a summary page that gives you the average mpg for all the fill ups and also it give your last mpg. My last mpg should have been 31.7 but it showed over 50 mpg. Yea I wish!!

The application also allows you to keep track of Maintenance as well as Trips. In conclusion however I was very unimpressed with this application. I assume that the desktop version then reads the database and gives you more information but that is a bit overkill for what I want. I just want the Palm version to give me the info I want. I think I'll be sticking with Automobile for a while.

One last quirk I found was the database it produces is not a .pdb in fact it has no extension. I wanted to see how it would transfer to another device. I tried copying the database to another device by first putting it on the expansion card then copying it to the second device. The file managers I tried would not allow a non Palm database to be moved to device.

don't waste your time or money

I've now had this software on my computer and Treo for several months and I've had to reload the data 3 times, the data duplicates on sync and there is limited, if any, support. There are obvious problems. Nice concept and appearance, but.... it just isn't 'there' yet.