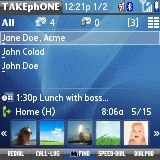 ShSh Software has released an update to its TAKEphONE software. TAKEphONE is a telephony & contact management application, designed to simplify and enhance using your contacts and making calls. It also sports enhanced search capabilities, as well as telephony features, such as calling-card support, extra digits dialing on all contacts, Internet phone number search and much more. New in this version is improved graphics and a number of other user interface improvements.

TAKEphONE v7.55 is available for $19.95 USD. The upgrade is free for registered users, simply install the new version via the free trial.

...the UI could use some help. After going back and forth between UltimatePhone (formerly DialByPhoto) and TAKEphONE for months, I have finally settled on TAKEphONE...but I really do miss the beauty of UltimatePhone. By his own admission, UI refinement is not the bailiwick of the TAKEphONE developer...and Tunji (UltimatePhone and TreoWeather developer) has all but given up on Palm as a platform...favoring iPhone development instead.

Why Palm hasn't bought both of these small companies and merged the power of TAKEphONE with the beauty of UltimatePhone is beyond me. In fact, I am consistently amazed that they haven't hired some like Tunji/GX5 to reskin the entire Palm OS. We care about the underlying OS (multitasking, etc.), but the other 99% of the world is impressed by good looks. Largely the same look and feel for nearly a decade and a Linux-based OS pushed out to 2009. Mitch Hedberg could have taken comedy writing lessons from those guys.

Okay, I'm off to look for the receipt for my donut.