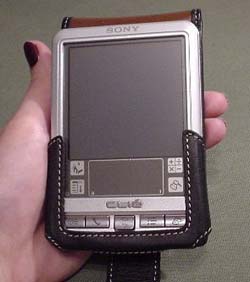 For the first couple of months I owned my SJ30 I was using the essentially useless factory-supplied flip cover, while looking for the "ideal" leather flip case. I tried a case by Bellagio and was disappointed with the style and the quality of the leather. So I decided to risk another $45 and buy the Covertec flip case for SJ/SL series Clie. Based on the pictures at the Covertec website, I couldnt get a feel for just how big this case was going to be, and with a lack of any reviews of it available to me I was hesitant, but decided it was worth a shot. It didnt hurt that the black leather and contrast stitching matched my wallet to a T.

Overall Appearance
The case is made from beautiful, high-quality leather that is sewn and molded impeccably. It is soft and flexible, with no need for a break-in period to fold the top flap around to the back. Thanks to this, unsightly wrinkles and creases are less likely to form. Unfortunately, the softness of the leather increases the chance of dents and scratches. Luckily, the natural grain of the leather appears to conceal these well.

With the Clie in the case, its 1 1/8 thick at its largest point (the strap adds about an eighth of an inch to the overall thickness). At its thinnest, its 7/8 thick. Its just under of 5 long including the added length from the strap, and barely 3 wide. On its own the SJ30 is 4 1/8 x 2 3/4 x 5/8. In hand, the Covertec case feels quite slim, which is more important than what the numbers say. What they do say is that the case adds a maximum of 1/2 to the thickness, and 1/4 at its slimmest. It adds almost an inch to the length, and less than 1/4 to the width. Thickness can be hard to judge, however, because the snap and strap add a fairly large amount to the overall thickness, but when in use theyre not engaged and thus dont add anything to the functional size.

Design and Construction
There are two credit card slots and two memory stick slots in the upper flap, both of which are composed of thick, sturdy leather with no apparent sign of vulnerability. The leather is dyed well, and doesnt show cracks or flaking. The stitching is done with a smooth heavy-duty thread, and there isnt a frayed edge or stray drop of glue in sight. The front features a small stylized Covertec logo. The case is held closed with a magnetic button that is very secure, and occasionally attracts my stylus. Because the magnet is placed on the backside of the case, it shouldnt interfere with credit cards, but I personally wouldnt risk it.

The card slots actually have some really impressive minor details: they are curved at the edge with notches at both ends to facilitate card insertion, and the back of each slot is lined in a nice fabric, to separate and protect the cards. The memory stick slots are a bit tight, but would most likely loosen up with time. I only have one MS for my Clie, and dont like the idea of pressing a hard piece of plastic against my screen, so I dont plan on using these slots for memory sticks. The top of the inner flap has a tasteful Covertec logo stamped in the leather. With one credit card in each slot and the MS slots empty, there is barely any additional bulk, and the case closes without a struggle. Covertec has added a generous amount of room in the overall length of the case as well as the strap. Thanks to the raised edge of the U-holder the cards dont come in contact with the screen or buttons of the Clie, even when slight pressure is applied. Sitting on the case, however, probably would cause the cards to press against the graffiti area of the screen.

This is actually a weak point of the case. I find the overall fit to be a bit loose, not as snug and form-fitting as Id hoped. I dont worry about the Clie falling out while in my purse or pocket or hand, but I do worry about loose dust/dirt, papers, keys, etc. getting between the cover and the screen and scratching things up. So far this has not happened, but Im still keeping my fingers crossed.

The U-shaped holder that keeps the Clie in place is reasonably secure, though not quite snug enough for my tastes. The Clie has a tendency to slip out of place a bit, especially when putting pressure on the jog dial and the back button. It is easily seated back into place, and doesnt threaten to fall out entirely, but it is a minor annoyance. This is also one of those things where I feel like out-of-the-box the case doesnt fit perfectly, but (like a pair of shoes) the leather will fit the contours more uniformly with use. There are some details to the U-holder that I find very pleasant. The leather is a soft suede on the portions that come in direct contact with the Clie. The entire holder is double-stitched very securely, and the holder itself is constructed with a piece of metal that can be bent slightly to more snugly hold the Clie.

The U-shaped holder also has another benefit: unobstructed usage of the jog dial and back button. The other case Ive tried wrapped the entire Clie in leather and had cutouts for these buttons. I didnt like it, but I got used to it. Theres no adjustment period here. I would rather have the Clie be a little less stable and have unencumbered access to the left side of the unit than have it strapped in securely. The holder itself blocks the buttons ever so slightly, and can impede tapping the edges of the screen just a bit. This isnt really a deal breaker for me, and is just one of those things I get used to quickly.

Function
The case has some minimal padding, which I think is sufficient to protect the Clie in the event of a small drop. The leather itself should absorb shock sufficiently, and there is a thin layer of foam inside the top flap. Beware, though, some may be a little uncomfortable with a case that leaves the sides of the Clie fairly exposed. Theres certainly more protection here than with a standard wallet case, but those who feel they need superior scratch and impact protection should probably be investing in a really sturdy hard case, anyway. 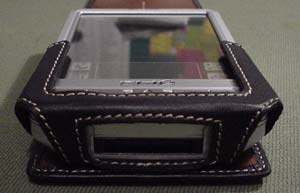 The back of the inside of the case (the portion that sits against the back of the Clie) has a padded bump that both protects the Clie and corrects for the hump of the battery. The bottom of the case has a cutout to sync with a cable. Unfortunately, no cradle sync is possible with this case on, but since the SJ series doesnt even come with a cradle, this wont be a big deal for those of us who didnt buy one separately. For those who did, its easy enough to get the Clie in and out of this case that I dont think it would be too much of an annoyance.

I mentioned using the jog dial and back button on this case was easier than with the other one Ive tried, and that sentiment extends to holding this case in general. The leather is quite soft and flexible, and sits in my (relatively small) hands comfortably. One thing I look for in a case is the ability to comfortably read and use the jog dial while holding my Clie in one hand. The other case Ive used didnt really allow this, so I held the Clie in my right hand and tapped the screen with my finger to turn the page. The Covertec case, however, is very comfortable in hand, and reading is not a strain on my fingers or wrist while holding the case.

One feature lacking that I've seen on other cases is that there's no cutout on the back for the reset button. This is a fairly simple task for the case maker, and Im a bit disappointed that they didnt bother doing it. Luckily, I dont have to reset much, so it's only a minor hassle for me. People who overclock and run a lot of hacks, however, may be very fond of their reset button, and wouldn't like taking the Clie out of the case every time they crash.

Overall, my impressions of this case are very good, even with the few negative issues I have about its design. I like the craftsmanship and leather quality so much that I would be willing to buy any other case Covertec made on those criteria alone. Considering that other high-quality leather cases with similar design go for nearly double the price of this one, I think it is in excellent value at $45 direct from Covertec (prices vary with other resellers).

Way too nitpicky of a review

I'm sorry but a case should never have a reset button hole. It is supposed to protect the device. If the Palm crashes, you can pull it out of the case and reset it. The vast majority of Palm users don't even know there is a reset hole on their devices.

As far as too loose, that is incredibaly subjective -- espically for a stitched case. Since there is pull and wear from the factory floor to your hand, no one can control that material with a tolerance down to the millimeter.

I love it when people who give advice actually follow it themselves. :)

In regards to fit, a product like this can be too tight, just right, or too loose. Most manufacturers make something like this a little snug to make up for production variances and stretching, so I would not expect a stitched leather case to be loose on day one either.

i wonder will it work with a sj33?

I will definitely check out covertec. Thank you!

ptevesjr @ 2/16/2003 5:31:06 PM #
Great review! It's nice to see someone that is detail oriented and honest about their review. I know we can review it, and make our asessment on the case whether we would buy it or not. I say continue to be detail oriented (nit picky), and let the ball roll where it may. Thanks for you input :) and keep up the great work Palminfocenter!