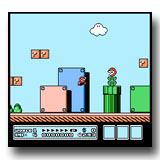 A day after posting about a gameboy emulator, today brings word of a new Nintendo NES emulator for webOS. Kalemsoft, has ported over its NesEm emulator, first developed for Palm OS.

NesEm is currently available in demo form via PreWare or the developers site. It is closed source and costs $9.99 for a license. The demo is restricted to roms under 40k and has a time limit.

Good for Kalemsoft, but strikes me with a price 'that high' (in current app store terms) they might not be alone for long; good on them for bringing a written from the ground-up emu over from Garnet :)

RE: Typo in story

Thanks J, Snow Leopard's auto-correct keeps messing with me ;)