Mario Kart on the Nintendo SNES was one of my favorite time wasters back in the early-mid 90s. Now a similarly themed title has made its way to the Palm platform courtesy of Viex Games & Xavier Martin. Read on for details on one of the Palm OSs finest racing titles! 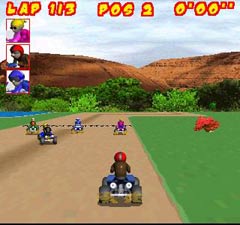 MicroQuads superficial as a "cute" kart racer belies its actual depth and difficulty. This is not a game where only a small handful of levels are offered and completed in one afternoon! Twenty different tracks/levels are comprised of five difficulty levels with four unique tracks. Rumor has it that there are even some hidden unlockable tracks somewhere within the gameAll of these factors add up to plenty of value and longevity for registered users of MicroQuad.

The difficulty levels are, in ascending order of difficulty; Baby Cup, Junior Cup, Pro Cup, Master Cup and Expert Cup. In a rather frustrating touch, the Baby Cup must be completed to advance to the Junior Cup. I was really hoping to skip ahead to Expert level and see HOW much harder the game becomes. Baby Cup is easily completed but the difficulty is cranked up a good bit in the Junior Cup. Each level include 4 very detailed and varied tracks.

The player is also offered any one of six different bikes. Unlike Mario Kart, I did not notice considerable differences in the handling or acceleration properties between different karts, despite their specs claming strengths in different areas (road, off road and grip. Of course, anyone fancying a quickn dirty game can jump right in with Quick Race mode. I was sadly unable to test out the multiplayer component of this game over Bluetooth.

Graphics & Sound
Regardless of the quality & replay value of the game itself, most gamers are going to take notice of the eye-popping graphics & animation of this title. The digitized backgrounds (usually some form of cityscape) are nicely done and rather realistic looking. The scenery is sparse--usually trees, grass and waterbut it flies by at such a breakneck pace that you wont have time to notice. Colors are eye-poppingly bright and minor details such as track debris and vehicle animations are well done. Xavier Martins technical prowess is commendable, especially considering the fact that this is a multi-platform title nearing two years on the market!

MicroQuads sound effects & music are far less stellar than the graphics but there are still some decent, albeit sparse, effects here and there. In-game effects are appropriate and about what you expect from a kart racer like this. An odd theme song plays during the main splash screen. It sounds like an outtake from the soundtrack to an adult film from the mid 70s. Probably the closest thing I can think of to liken it to is the beginning of the theme song to Threes Company.

Controls/Misc
An innovative onscreen button system makes for ideal control given the cumbersome button layouts on most Palm devices. When playing the title in 480 x 320 wide mode on my TX, I steer my kart with the d-pad and controlled throttle & reverse with two onscreen arrows. These buttons can vary in placement & function by way of the games options menu (a nice touch). Also, left-handed modes are offered as well! 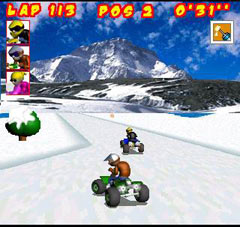 MicroQuad launches flawlessly from my SD card with no technical issues whatsoever on my Palm TX. The game loads VERY swiftly even on a standard Sandisk SD card. I was expecting the usual loading/unpacking status bar all too common on recent Palm games. Im glad to say that this is one tightly optimized piece of code.

During extensive game play and testing I never encountered a crash or reset brought about by MicroQuad. One minor quibble I have is with the rather aggravating registration scheme involving the download & installation of an unlock key even after inputting my registration code. Fortunately after doing once the game was unlocked and all was well. This is by now a very mature & stable application. I tested version 1.1. The title is compatible with all Palm, Clie & Tapwave Palm OS 5 devices supporting at least 160 x 160 color (essentially, Zire 31 & above). The fully registered version takes up nearly 2mb on my FAT 32 formatted SD card.

Conclusion
Without a doubt the best racing game on the Palm platform. The only title that even comes close is GTS Racing by Astrware but it loses major points for lacking HVGA compatibility. MicroQuad is not only a technical marvel but its a superb game that is almost comparable in quality to titles offered on portable game consoles. Xavier Martin & Viex Games should truly be commended on a job well done!

The review could also talk about AI part of the game, wich honestly is lacking. The player cannot compete with the computer on same terms, sometimes computer cheat on speed so bad that the last quad could fly by pass you in a short time. And because of the limited AI the game can get boring, too bad, the graphics are so great and overall the game is nice and solid, cept the AI.

I too have found MicroQuad to be a watershed in native Palm OS gaming. It really is as elegant as Mario Kart. I must say, this game works flawlessly on my LifeDrive and has for months. I cover this game in my Life of a LifeDrive photoset on my Flickr page. You might be interested in perusing my little site for more screenshots and comments on MicroQuad: http://www.flickr.com/photos/mikechicago/sets/72057594060559578/

Thanks for the commments & link, Mike.

This title isn't perfect (is there any game that IS?) but it holds up very well against Kart racers on any platform. Taking into consideration the variety of POS handhelds it runs well on it's absolutely amazing.

Rather sad that the best milestone moments in Palm gaming history are seldom (if ever) updated and even less often revisited with sequels or expansion packs.

In fact, I'm planning an editorial/feature story in the near future about the overlooked & forgotten gems of the Palm gaming scene. If you have anything you'd like to contribute or suggest, mail Ryan and we'll look into it.

I think you lost it Kris. A review on a few year old game? Genious!

Nah, I'm just kidding. Its a fun game. Did you ever get to try EDGE? http://www.rzanerutledge.com/edge/index.html

add to the list of forgotten gems:
Aldon's Crossing