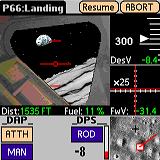 I primarily played version 1.0 for the purposes of this review. However, I did manage to spend a bit of time with the the recently released 2.0 update and have amended some areas of this article.

Read on for a brief overview (note: all comments apply to version 1.0 unless specifically noted) of my impressions of this title targeted squarely at space buffs and NASA trainees.

Gameplay
LEM (Lunar Excursion Module) is not a title for the faint-of-heart or casual gamer. This is what I consider a hardcore title that could possibly find its widest audience amongst non-gamers usually put off by twitch-oriented fare.

There are primarily two modes of gameplay in version 1.0: Approach Phase and Final Landing phase. I found both modes equally challenging. Game difficulty levels range from Rookie to Pilot to Commander.

LEM keeps track of high scores for those players good enough to actually score points in the game! Version 2.0 adds a number of configurable options such as mechanical failures, fuel shortages and much more. All of the improvements in 2.0 go a long way toward drastically extending the replay factor over the older 1.0 iteration.

Graphics & Sound
LEMs graphics are basic but functional. I found all of the onscreen menus and gauges clearly designed, colorful and easy to read. The highlight of the gameplay graphics would be the artificial horizon gauge and the nicely digitized image of the moons surface. A nice splash screen appears on startup showing a scene from the Apollo moon landing and a quote from J.F.K. 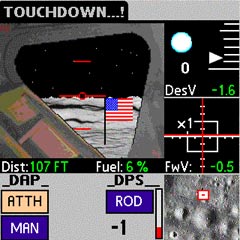 Sounds are quite atmospheric and one of the few instances in a Palm OS game where the audio outshines the graphics. Realistic digitized voices of Houston control room operators come through the internal speaker loud and clear. My (frequent) crashes resulted in an explosion that sounds far more impressive than it looks onscreen.

LEM 2.0s graphics have seen a considerable improvement over version 1.0. There is much more onscreen animation and more detail to the overall cockpit perspective. Version 2.0s graphics capabilities make you wonder if a rudimentary flight simulator might be possible under the same engine

Controls/Misc
Despite leaving everything in automatic mode and making judicious use of thrusters, I never was able to make a perfect lunar landing. This is precisely why I prefer twitchy arcade shooters to detail-oriented simulators such as this one. The Palms 5-way navigator controller capably handles approach angle and descent velocity. This is a game whose controls are easily learned but not quickly mastered.

Conclusion
Quite frankly, this is not the sort of game that appeals to my personal tastes at all. I wouldnt even have reviewed this title had Ryan not suggested it. That said, it was interesting to take a look at a title that deviates from the action & puzzle titles usually seen on Palm OS.

I am certain that there are many space simulator buffs out there that will flip over a title like this but Im just not one of them. Patience is a virtue for simulators and I honestly have little of it when looking for a quick portable gaming fix. Of course, I highly respect the amount of time and passion put into crafting this game by its developer. Version 2.0s improvements do go a long way toward making LEM more of a real title. Indeed, 2.0 paints positive signs that will help future versions of this engrossing title expand a bit past its current niche audience.

Rating (if youre like me and prefer action & arcade titles):

Everyone please note that the screen images Ryan posted are from the newer version 2.0 of LEM Simulator.

Version 1.0's graphics are not nearly as polished looking, though the general screen layout & status readouts are depicted similarly.

As an aging boomer, I grew up in the Apollo age and want to put in a postive comment for this game. Just in terms of the coding it's very well done. Installation and operation are straight forward and the program is very responsive on my T3, making for realistic "flying". The audio is sensational and not only provides atmospherics but provides critical cues at each stage of the landing, (altitude, fuel level and autopilot state for example).

I was able to make successful landings consistently in "Rookie" mode in both LEM 1.0 and LEM 2.0 after about a half hours practice. It feels like landing is easier in LEM 2.0. One thing not mentioned in the review is that it's possible to bring up a "flight plan" during the sim which provides altitude/velocity targets to help you get down in one piece. I've moved up to "Pilot" now and I crash more than I land, so things are much more interesting.

I think the reviewer is correct in thinking that this program is going to appeal to a different type of folk than the average gamer. This is really a simulation, (and a pretty good one), not a game. It rewards consistency and the ability to keep to the flight plan, no matter what contingencies are thrown at you, very much like the real thing. Wish I'd written it.

Didn't mind the McD's afterwards, though.

Glad to hear you guys are able to put this "game" in the proper historic respective and appreciate it accordingly.

Again, and perhaps I still didn't stress this strongly enough in my review, marketing & reviewing this title as a "game" is perhaps something of a disservice to potential fans, the developer and space buffs in general. If someone would like to contribute a guest review to Ryan and weigh it on its merits as a simulator (something I personally am ill-suited to do as it's been years since I bought a flight sim title for PC) I am sure it'd make for an interesting article.

I am the develloper of LEM Simulator 2.0 and I wanted to thank you all for your really kind comments about the "game". Thank you also Kris for taking the time to review LEM Simulator 2.0 I found your review fair and to the point. Yes I wanted version 2.0 to be accessible to more people since it looked more like a flight simulator. I may eventually add an "arcade" type mission where the controls are easier but for my firt app, I wanted to keep as close as possible to the real thing since it is what I set up to do from the beginning. Obviously it limits the "game" appeals to crazy people like me and some others!

One of the issue how to categorize the app. Game was really the only one available on most web stores. Some of them have a "simulation" section but not all. So you guys are right. It is not really a game per se.

I have just released version 2.0R which is now compatible with low screen resolution like the TREO 600 so I am hoping more people will be able to take it for a landing.

In any event, thank you so much Kris for taking the time to review my little app even so you like arcade type games. This make me even more appreciate your time. Thanks also to all of you who took the time to post comments.

So if you are at all interested in purchasing LEM Simulator 2.0, do it now and save some money in the process!