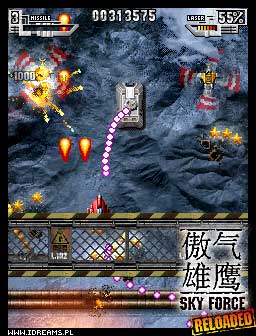 New Palm entertainment software is always a welcome sight. New Palm action titles are even more exciting, being that the genre is rather underrepresented on the OS. So it stands to reason that a sequel to a high-quality POS action game is something worth getting excited over right? Less than three months after reviewing the original Sky Force for PIC, I saw on Infinite Dreams website that a sequel, Sky Force: Reloaded, was in the works. Read on and see if this marathon shooter is truly a worthy sequel or just an expansion pack to an already outstanding game!

Plot and Game Options
Par for the course on these sorts of shooters, no attempt has been made at a back-story. Id assume is would revolve around your ship having to save the world from any number of ghastly enemy forces/alien invaders. Ho hum.

Reloadeds primary improvement is a screen where you can resume from any level already completed. Its not an actual save game feature per se but its damn well close enough! This is the perfect addition for the dedicated gamer who can just catch enough gameplay during free time to beat the game one level every few days. Kudos to Infinite Dreams for implementing this featureits a perfect compromise between keeping the game hardcore for elite gamers and making it just friendly enough for the casual gaming crowd.

Next up is the aircraft selection screen. The same three fighter classes are present this time aroundthe fast but weak purple scout, the rugged but sluggish brown bomber and the all-around average red fighter jet. Gameplay options, totally unchanged, are made at the title screen. I played through the game in the bomber this time around but I did do some test levels in the other two ships.

Gameplay
Infinite Dreams has done it again! In fact, they have perhaps kept too much the same. Some greater level variety or new types of power-ups would have been appreciated this 2nd time around. This is primarily the reason I see this as more of a standalone expansion pack to the first game and not an actual sequel.

Reloaded remains a singe-player only affair. I immediately noticed that this game serves up much more of a challenge to the casual gamer from the get-go. While I beat the original title without too much difficulty in normal difficulty mode, Reloadeds later levels in easy mode provided some degree of frustration. Normal mode begins modestly challenging from the start and only grows more difficult with each second of constant action. Enemies come at your ship relentlessly and the added challenges of not shooting prisoners and collecting powerups truly add to the intensity of the gameplay. As I said in the earlier review, novice gamers need not apply! 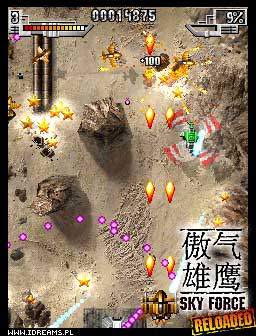 Graphics & Sound
Another tour-de-force performance by Infinite Dreams under the mild mannered Palm OS! If anything, I found myself squinting more this time around. Now, part of this is due to the reduced screen size of my Treo 700p. But even when playing both Sky Force titles back to back on my Palm TX I found the newer version a bit harder on the eyes due to more onscreen sprites and landscape graphics that were perhaps a bit busier or too similarly colored. Sadly, support for 320 x 480 screens outside of window dressing is not present in this version. Sound is just as fine on this version as on the original. A title with such fluid animation and detailed stage scenery is just crying out for a larger screen to showcase its eye candy!

The title screen features a stunning graphic that could be ripped form todays headlines: two helicopter gunships flying over oil fields against an ominously cloudy sky, a scene that does not appear within the game. I am not surprised at the depiction of two choppers in the title screen. The prequel had a graphic of an SR71 Blackbird and that was not a playable aircraft in that game. Uptempo industrial/techno music straight out of the mid 1990s sets an appropriate mood throughout.

Control & Misc
A Sky Force game is always a sure-fire guarantee for plenty of frenzied action and a set of sore thumbs. This is especially true in this followup sequel/expansion. While the first Sky Force upped the ante considerably between Easy and Medium modes, even Easy is a true challenge on Reloaded!

Between the time of my review of the original and Reloadeds release, I replaced my Palm TX with a Treo 700p as my daily device. I found that a button layout that was a serviceable combination on my TX didnt quite do the trick on the Treomy fat right thumb kept hitting the red End/Power button and abruptly haling my gameplay! Fortunately, Infinite Dreams useful button remapping feature in the setup menu took care of this minor issue. I unfortunately experienced a handful of random crashes when exiting the game or when accidentally hitting the power button mid-game. These are probably attributed to the 700Ps memory architecture or the developers rushing the title to market prior to completing play testing. In limited gameplay on my old TX, these issues were not as prevalent. By far the most frustrating annoyance was a crash mid-game and restarting only to find out that I had to rekey my registration code. Since I was out of town for a couple of days, I couldnt plan the game until returning home and re-registering it. Otherwise, the game was stable in this initial 1.00 revision. It also launched nicely off of an SD card with the exception of the one major crash that wiped out my registration code settings. Reloaded occupies just 353k and can install completely to an SD card. 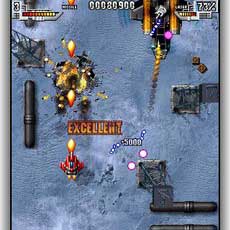 For the most part, this reasonably priced expansion offers more of the exact same stuff that garnered the first title a 4.5/5 score back in March. Perhaps my biggest complaint is the over feeling of things being almost too similar this time around. Also, some of the minor quibbles I found with the first game still exist in this sequel.

Sky Force: Reloaded (and its predecessor) are multi-platform titles in the truest sense of the word in that are ported by the developer to several drastically different mobile OSes. This accounts for some of the technical limitations pointed out above, with 320 x 480 HVGA support remaining the single most notable missing feature in the game.

Regardless, Sky Force: Reloaded should be at the top of any action gamers list for a quick shooter fix. Im eagerly looking forward to the next installment in this superb series where hopefully some solid improvements will be made to the titles already superb graphics and gameplay!

I too would be glad to see a tweaked version appearing with true 320x480 support, but I guess you can't blame the developers for taking the easy route.

Anyhow, this installment to me stands up alongside MoonFighter as a real classic slice of retro-shooty-heaven!

KV;
Thanks for the compliment. I fondly remember the good ol' days of side scroller console shooters and top-down Amiga/ST shooters. It's nice to see the occasional new title made in the same mold. I'd rather have 320*480 over 320*320 but I'll take 320*320 over no new games at all!

I still consider Zap 2016 my all-time favorite POS shooter simply due to the fact that it looked so amazingly good (for its time) on the Visor Prism and that its sprites weren't microscopic in size! If you like SkyForce & Moon Fighter then I highly recommend Plazmoids (review coming soon) & Cybersaurus (see PIC review from last month).

Everyone feel free to contribute any guest reviews or--developers--drop us a line and let us know what you have in the works. With PDArcade seemingly down for the count I want PIC to get as much of the POS gaming focus as possible.

The one place I get made a moderator _AND_ a judge and it decides to close down shop indefinately. Oh well. It was still sweet while it lasted

Ack;
What was/is the "real scoop" behind the closure of PDArcade? Are you allowed to say?

It seemed rather abrubt/sudden. Although it did seem like things had gotten quiet around there the last few months before it went POOF, even with the still-strong slate of WinMob entertainment title releases.

Any unpublished POS game reviews you've got mothballed that you'd care to send our way? Ryan and I would appreciate whatever anyone can submit.

Anyone noticed the Chinese title for the game in the screenshot?

Is this game selling well in China?

RE: A Chinese title?

w/o any research whatsoever, my guess is the devs are chinese or related in some way.

No clue on sales. I don't even know about Palm sales figures. I have lived in Shanghai for 3 weeks. AFAIK, the only city more modern/sophisticated than that in China is Beijing. It was odd indeed. Even what appeared to be the more poorer class of people had rather nice cellphones. I've only seen around 2 to 3 PDAs while I was there. A winCE PDA used by a McDonald's manager and a tourist with either an m105 or Vx. This was 2 years ago. Given cell/smartphones increasing popularity in the states, i doubt my observations have changed much since then

"Do you know the difference between an error and a mistake? Anyone can make an error, but that error doesn't become a mistake until you refuse to correct it."
-Grand Admiral Thrawn