Simply put, in Hobbyist Softwares own words, Phone Technician Makes your Treo a better phone.
A brief rundown of its feature set gives the following improvements:

The recently released version 2.71 adds an 8th feature known as Call Master (more on this below).

Testing Methodology & Performance
Due to the comprehensive nature of the application and time constraints for performing this review, I focused on the three aspects of the app that I felt would provide me with the greatest benefit; MP3 ringtones, the in-call volume booster, and disabling alarms during calls.

I did spend some brief time using all of the other features and they all worked as expected. I showed the easy conference-calling feature to an older, tech-phobic colleague who has consulted me on more than on one occasion in regards to establishing a 3-way call on his cell phone. He claims that Phone Technicians 3-way feature is the best damn cell phone invention ever.

I already use Pocket Tunes for all of my MP3-playing needs but I did sample the built-in MP3 player for a few tunes. Audio quality was average but this is a BAREBONES, track-by-track player. No detailed track information, no real interface to speak of, and no provision to fast forward or skip through multiple songs. It is worth noting that the audio continues playing after the LCD turns off so take care to pay attention to this to keep your battery from running down.

By far, my favorite aspect of Phone Technician is the volume booster. Of the four people I personally know with Treo 700ps, mine is the oldest, the most heavily used, and the hardest to hear. My hearing is quite good and I still struggle to hear some soft-spoken callers when I am driving or outdoors in a noisy environment. Phone Technician maintains the standard Treo in-call volume bar but adds the little technician icon when the feature is activated. The topmost volume bar also turns red when in boost mode. I noticed what appeared to be four additional levels of volume boost past the initial red bar appearance. So my Treos volume basically goes up to level 14 now vs. the previous level 10. Fantastic. I didnt notice any major distortion in my speaker nor any major impact on battery life. Do note that Phone Technician does not seem to impact ringer or speakerphone volume. 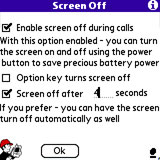 I spent the majority of the review period with version 2.5 of Phone Technician on my 700p but the utility is currently up to version 2.71. 2.71s major addition is the Call Master feature, which enables control of phone actions with hard key presses (space bar for speakerphone etc). In brief testing of this new version

The application takes up a mere 98k on the Treo, not counting, of course, whatever space is occupied by mp3 ringtones.

A fully functional nagware demo is available for download. Hobbyist Software provides free version updates for a year from date of purchase.

Conclusion
Phone Technician is simply a must-have application for Treo owners who spend more than 10 minutes per day using their devices as a telephone. The combination of Butler and Phone Technician makes for a powerful 1-2 punch. The volume booster part of the PT alone is worth the purchase price. With the added value brought to the table by the other aspects of PT, its a no-brainer to purchase this app over Volume Care.

Phone Technician is available now for $14.95.

Puh-LEASE! Moving from a dumbphone to a Treo is like going from a Volvo to a Ferrari... Other than that, though, nice review hk. ;)

I too love the smartphone. But, the phone functionality compared to my little S/E T637 is a joke. People ask me about the Treo all the time and my response is "As a converged device, it's really great. But, as a phone or a PDA it's nowhere near primetime".

As a PDA it's woefully weak for one coming from the T3. As a phone, it has so many little nagging issues that it's a wonder I haven't smashed it on the ground yet.

A utility tool kit for the Treo gets my hearty applause.

It's a great app, no doubt, and combined with Butler it takes care of some of the major shortcomings & annoyances foisted upon us by Palm. But to compare it to a dedicated cell phone with great RF performance like the Motorola E815 or the SE Pat mentions is just preposterous. Even a phone like the GSM RAZR that I considered to have "mediocre" reception blows a CDMA Treo (with its nub antenna) out of the water.

As a phone, it has so many little nagging issues that it's a wonder I haven't smashed it on the ground yet.

I know! Personally, I detest the large anti-squint screen and the user-friendly on-call UI. And that damn ringer switch? Far too conveniently placed. :P

(...okay, so there's also the lack of built-in profile switching, average call quality and low volume. but i have good ears and Profiles is freeware...)

Thanks for the review

Thanks for the review Kris. Glad you like Phone Tech.

1) Phone Technician does boost volume on the speakerphone. It doesn't use the same volume setting as for the headset/handset though, so you have to switch to speakerphone, then turn up the volume. It works just like of the handset or headset, the volume just increases into the red.

2) The mp3 player. As you say, it's a bare bones player. It's not intended to replace pocket tunes, or even realplayer for listening to music. It's just there to play the mp3 ringtones if you don't have another player (like pocket tunes) to use. One advantage is for 650 owners - They may only have Real Player on their device which doesn't play nicely with other applications like ringtone managers.

Anyway - thanks again for a clear review!