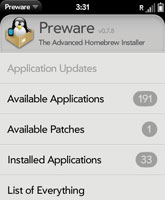 Palm Pre & webOS hacking has come quite a distance since we last took a look. Thanks to some excellent community-developed tools and Palm's generous free access to the Mojo SDK, it's now quite simple for your average user to get their homebrew on, a godsend in light of the still-undernourished state of the official webOS App Catalog.

One of those aforementioned tools is Preware, an open-source package management system which allows the user to download and install homebrew apps and utilities with one touch. Currently in beta at version 0.7.7, it can access any of the open package repositories from the open standard preware.org repository aggregation site. webOS-Internals developers Rod Whitby and Brandon VanBelle (better known to the community as rwhitby and oil) today released an alpha build of version 0.7.8, which adds app screenshots and descriptions and makes the whole experience a bit more user-friendly. They're looking for help with alpha testing, so if you're willing to roll your sleeves up, read on for Linux installation instructions.

I've been playing with this app as well as FileCoaster, PreUpdate, and PreLoad. (It's getting to the point where the number of Homebrew app installers is a sizable fraction of the number of actual apps in the Pre App Catalog.) FileCoaster is probably the most polished app but doesn't keep track of whether your existing apps are up to date. PreUpdate and Preware both do this and allow you to update your apps fairly quickly.

While Preware draws from more respositories and has more apps, including the Virtual Keyboard, it can be very slow to start up. Perhaps this in part because of the larger number of repositories that it accesses. Perhaps this is because the Package Manager Service is crashing in the background. (A couple of times Preware has come up with an error message stating that the Package Manager Service is not running, I am assuming that this means that it crashed during the app start up.)

But I think that the elephant in the room that no one has mentioned yet - and perhaps this is because a lot of PIC users don't have a Pre yet - is that the Pre seems to have a limit to the number of apps which can be installed. Right now I have 52 apps installed (including the built-in ones) and I often have to delete an old app in order to install a new one. This isn't a problem now that the App Catalog only has 45 apps but pretty soon, as more apps get approved, more mainstream Pre users will begin encountering that app limit. This is a problem which Palm will need to address soon.
Screw convergence
Palm III->Visor Deluxe->Visor Platinum->Visor Prism->Tungsten E->Palm LifeDrive->Palm TX->Palm Pre
Visor Pro+VisorPhone->Treo 180g->Treo 270->Treo 600->Treo 680->T-Mobile G1->Palm Pre
http://mind-grapes.blogspot.com/

Thanks for the update. You're right, your the lonely Pre user here at PIC. Soon the world will pass this site by.

In my life a 52 program limit is a little like having a car that will only do 100 mph. Like I'll ever go there. I think the most apps I ever had on my Treo was on the order of 12.
In short, I had always believed that the world involved magic: now I thought that perhaps it involved a magician.
- Chesterton

You're right, your the lonely Pre user here at PIC. Soon the world will pass this site by.

Darth:
webOS has only a teensy-tiny litte storage partition for apps. agreed that this'll become a problem later on, especially once they start releasing games which will take up a much bigger footprint.

If that's so, and the upper limit can't be changed, I'd think that was a big problem for developers. According to this: http://www.macrumors.com/2009/08/27/app-store-market-worth-nearly-2-5-billion-per-year/

iPhone users buy an average of 10 apps a month, and iPod Touch users 18. That sustains an enormous market. If my Pre fills up quickly, then that market has a very annoying cap on it.

I assume they can fix this though, and that they will as the Pre app store gains momentum.

where's your PRE review, DR? come on man, step up your game and contribute.

where's your PRE review, DR? come on man, step up your game and contribute.

Clicking on the "Palm Pre" keyword anywhere on my blog will show that I've also posted numerous reviews of webOS apps, including three fairly extensive posts on Classic and numerous pictures taken with the Pre's camera.
http://mind-grapes.blogspot.com/search/label/Palm%20Pre

i don't want to visit your dumb blog.

Wasn't that in-house slang for "ready for release" @Palm?

the app limit is rumored to be changed by palm in a future os update.

as ipod touch user i havent bought 18 apps in the life of having the product. i have had it for 2 years.