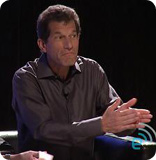 Engadget's new live variety show/podcast (entitled, fittingly, The Engadget Show) is now available for viewing, and of course the big item of interest for us here at PIC was the appearance of Palm CEO Jon Rubinstein. The pleasantly unassuming Ruby sat down with editor-in-chief Joshua Topolsky for a good half-hour, discussing his own storied career in the technology industry, his role in Palm's comeback efforts over the last couple of years and some of the challenges facing the little mobile computing company that could. (Not to mention capping it all off with an Oprah-style "Everyone gets a Touchstone!")

Nothing earth-shattering was uncovered over the course of the conversation, but it still proves an interesting watch, especially some of the unscripted quotes. Ruby's dig at the tech press "digging through Apple's garbage cans" earned a well-deserved big laugh from the crowd, but perhaps the most fascinatingly excruciating moment to your correspondent was watching Jon turn to the crowd and ask how many Pre owners are out there, only to be met with the lonely sounds of crickets chirping and tumbleweeds bouncing by.

How did you find the interview? Firecracker or flop? Why not hit the jump and post your thoughts?

What, nobody else watched it? There's some great stuff in there, like Ruby's admission "I helped" to hold down the pillow on the poor, suffering Foleo...

And Bit Shifter rocking out to chip tunes was one of the most bizarre things I've ever seen. (In a good way, mind you.)

And the part where he doesn't know details of the Pixi.

Heh. Topolsky hammered him a bit on that, too. Ruby actually looked a bit annoyed.

I wish Topolsky had pressured him to talk a bit more on the iTunes syncing, though. Could have been interesting.

Ruby could be a Palm murder suspect if the next few financial quarters are as dire as this one was.

Also, did anyone else notice the part where Ruby said that Palm OS was had been around for sixteen years? It's OLD but it ain't THAT old!

I mean, heck, in '93 I don't think there were any components of what would become Palm OS 1.0 in existence other than the Graffiti libraries and whatever bits of the Zoomer project made its way into the Palm OS (some of the Hotsync components, perhaps?).
I certainly don't recall reading anything about this new-fangled reinvention of the PDA until probably late 1995 or early 1996ish, right before the original Pilot unveiling at the DEMO conference.

Anyway, my point is that between the lack of knowledge of the Pixi specs and being bit in the dark as far as Palm's history...is it possible that Ruby's not bringing much more to the table than Colligan (i.e. lots of rah-rah enthusiasm and business acumen but precious little attention to the actual product?) I mean, isn't this guy supposedly insanely hands-on (remember the story from '07 about him forcing the engineers to make those 11th hour changes in China to the Centro's back panel so the speakerphone wasn't muffled?).

Rubinstein has yet to be proven as a CEO - that's a BIG jump from being a hardware manager.

This guy really needs to work on stage presence. Honestly, he should help out with a community theater production in Los Altos or Saratoga. That could get him on the ball a bit more and not looking down so much.

I could care less if he's facing a wall and sobbing onstage while dressed like a tranny. There are plenty of affable but clueless slicksters out there who can give a great dog & pony show that can be had for a song.

It sounded like the board gave him a deal. Get the Pre out on time, and you'll be running the show. The day after the Pre was available in stores, he became CEO.

Watching right now...think it is a entertaining show. Well done Engadget! Not a lot of new info, but good for people interested in Palm.