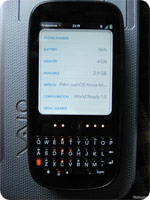 Mmm, how we love the smell of leaked vision in the AM. Palm's diminutive new Pixi smartphone has surfaced in Vietnam, modeling a lovely new GSM outfit. A poster at Tinh Tế is our tipster today, and in addition to some beautiful high-resolution photographs he has also uploaded a video of the device in action. This particular prototype is obviously an early model: a Wi-Fi icon is present in the preferences app, and the system information shows only 4GB of memory, both of which are contrary to the already published specs of the device. The video is embedded after the jump, along with some of the pretty pictures.

In other Pixi-related news, that ever-lovin' bastion of rumour-mongering, DigiTimes, is citing chatty "industry sources" in Taiwan, claiming that Compal Communications will begin shipping the phone to Palm by the end of September, with Q4 '09 shipments expected to hit 700,000-800,000 units. Which certainly couldn't hurt Palm's bottom line.

One of 2 things could be the reason for that:

-Palm's going to position the Pixi differently abroad than they are domestically. Sort of like the Centro, with the CDMA version being more "luxurious" (soft-touch paint, 128mb RAM version, 3G) in comparison to its GSM sibling.

Are we certain ATT does not a get a WiFi version? If it has it, I might consider the device. I would rather have a fixed 4GB than 8GB and no WiFi. Better yet just get the Pre. Still considering.
Pat Horne

Unofficial quote from someone on the Pixi team:

If any of you know the engadget or precentral posters, it would be nice to point out that gsm pixie is a ridiculously old prototype

I think it's safe to assume that 8GB (yay) / no WiFi (boo) are stll going to be the specs.

It is slow.
I noticed a small lag in responding at the touch of the screen.
I guess I can live with the fact that it takes about 2 minutes to start-up, but it is slow.
It's hard to believe that at the present time they just can make a fast enough phone like those made by blackberry.
I love Palm but when it comes to responsiveness and wait time, they are not cutting it.

I would not prejudge the Pixi's performance based on this video. The user seemed to have no idea how to navigate or use the device and it certainly seems like a prototype model so keep that in mind.

I understand you and you're right. Let's wait until the final version.
I should also mention that my belief is based on my current Pre, wich I own with all the updates.
I was very exited when I purchased the phone. Then I came to notice the phone also takes it's time and is somewhat slow too.
Let us hope the next Pre generation will sport a faster processor that improves responsiveness and performance.

Are there 2 slots for SIM cards??

That, plus the Pre coming to VZW at the end of the year... should be an interesting 2110.

Large number of devices and bottomlines

If Palm has to pull another "Centro" with the Pixi, then it won't matter how many Pixis are shipped - their bottomline won't get helped.

[there is high ambiguity about whether the very-well-selling Centro actually made any money for Palm; when the then-CFO actually was asked that question, he avoided simply saying "Yes" and said the Centro was contributing more than expected (lol!)]

True, but this isn't the Centro... they could really move a sh*tload of these into '10. Look at how many BB Curves are out there now, and this is a comparable fone (w/a better OS)

But no wifi, which the Curve has...as long as the 3G networks are all up to snuff it should be ok, but if not it's going to be a pretty intolerable experience.