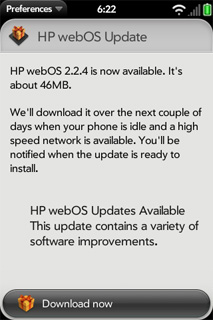 Also in the works is an imminent TouchPad OS update, this time to version 3.0.5, according to a source at PreCentral.net. Primarily a bug fix update, this new release isn't as monumental as the previous two TouchPad updates as far as new features and performance improvements are concerned. However, at this stage of the game, any OS update for a discontinued hardware platform is certainly cause for celebration.

The primary improvements in 3.0.5 for the TouchPad is a new "sensor API" for PDK apps, HTML 5 video support in portrait and landscape mode, and low disk space download alerts. HP is currently in the midst of finishing up testing for this release and no specific timeframe for its release has been announced.