CES 2003: Compex, a networking and connectivity provider introduced the BTE201 Bluetooth Wireless Access Point as CES 2003. The BTE201 enables up to seven Bluetooth enabled devices to connect concurrently to a network with a range of 10 meters (30 feet). 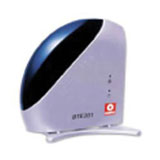 The Compex BTE201 is compliant with Bluetooth 1.1 (Class 2 range). It supports 3 main Bluetooth profiles: Dial-up Networking, LAN access profile and File Transfer profile. Bluetooth devices with LAN access profile or Dial-up profile support will be able to connect through the BTE201 to resources on the network. Besides print and files sharing, Bluetooth equipped PDAs can hotsync with remote PCs anywhere on the network. In addition the BTE201 supports File transfer via OBEX (Object Exchange Protocol).

The Compex BTE201 enables up to seven Bluetooth devices to be connected simultaneously having network coverage of up to 10 meters (30 feet). It uses the license free 2.4GHz ISM band for wireless transmission of up to 1Mbps. The BTE201 also has a gateway mode. In this mode it functions as a internet gateway supporting static IP, dynamic IP or PPPoE client mode connection to ADSL/Cable modems. The built in NAT function allows multiple Bluetooth devices to send and receive data through the internet.

The device is expected in retail and online around March of this year. Pricing is not yet known and we are still waiting for Compex to post product information on their website.

I think BT access points are an ok idea (if they come down in price), but will the main uses be only for PDAs and such?

Because 802.11a/b/g is better for laptops and PCs where battery life is not such a concern as on a PDA, not to mention better coverage and bandwidth. For something like a Tungsten or IPaq to use the access point, it was to be closer than 10 meters, since they are almost always Class 3 devices (use a lot less battery power). The access point may be able to "see" the PDA farther away, but the PDA won't have enough power to reach back to the access point. Even for a normal sized apartment, you'd need at least two for full coverage.

Someone point out the holes in my logic, because I'm sure there are some.

Admin @ 1/14/2003 2:21:55 PM #
Compex went with a Class 2 range because it draws less power from your PDA or laptop, thus giving you more battery life on you mobile device. So there is a slight tradeoff between range and power requirements.

I was previously unaware that accessing a class 3 (30 meter range) BT wireless access point would consume more power than if you were using a class 2 BT WAP.

sralmas @ 1/14/2003 2:26:08 PM #
The holes are that 802.11 and BT are not mutually exclusive technologies. They are different tools all together. Your 802.11 PDA won't do you much good the second you leave the home, though. However, armed with a BT phone and BT PDA, you've got a wireless connection anywhere that your phone will work. Wouldn't it be nice to have the BT adapter near your PC too so you can sync or check email without having to get behind your desk. On the otherhand, I have 802.11b in my house for my laptops. When not near a BT access point, that would work nicely for me too. If I had to choose between the two (and I don't and shouldn't), give me BT. At least then I can go wireless when NOT in my home and my PDA can dial my phone for me, which may be accross the room, and I can use my BT ear bud to speak. Different uses for different purposes.

Lidocaineus @ 1/14/2003 3:03:58 PM #
I understand the applications of BT and 802.11 - I'm not one of those folks who think the two are interchangeable. What I'm questioning is is the validity of BT access points. There doesn't seem to be a very large market for them outside of providing your PDA with an access connection in the home/office, but you still have to be relatively close to the AP.

I'll put it another way. If you have a laptop, you probably have 802.11 hardware built in or added on. Fine. You might have a BT dongle for connecting to your phone for access when you're away from an 802.11 access point. Fine. Given the choice, you'd use an 802.11 access point at home, not a BT one which I believe most people would agree with.

Let's say you have a PDA. It has 802.11. Fine, get an access point for it to work at home, and forgo connectivity on the road.

Now let's say your PDA has BT. You have connectivity on the road with a BT phone. At home or in the office, you use a BT access point. But is it worth it? After all, the BT transmitters in PDA's are very low power - class 3. That's 30 feet max, at optimal (no walls) environments. You would basically have to stand around the access point, or at least relatively close. It doesn't matter how powerful the access point is - the PDA BT device is the limiting factor.

So what you basically have is a BT access point that only works in a small area. I have a class 1 device (300 feet effective) but when it communicated with any BT PDA I have (or my roommate's), it can barely make it 15 feet thanks to the low powered BT in the PDAs. Your options are to either sit in a spot near where you place the access point, or place more than one around your home/apartment if you move around.

If these access points were cheap (say, $20 a pop), it might be ok, but I have a feeling that they will be in the $100 and up range when they first start selling.
That's quite expensive for an access point which will in all likelihood only be servicing your PDA in a very limited area, don't you think? Especially when you can get decent USB class 1 BT dongles (the Belkin's are excellent) for your PC for $25 and basically get the same thing...?

These access points are nice, but it all comes down to this:

What will they interface with? Laptops? Possibly, but 802.11 seems to be a better solution in that regard. PCs? I guess, though even 802.11 has more bandwidth than BT's max of around 1mbps, making it a very slow networking solution. That leaves PDAs and... what else?

"....Bluetooth access points present a very attractive alternative to Wi-Fi for many applications that value security and low power consumption. I strongly urge you to consider evaluating this technology very carefully before blindly jumping on the Wi-Fi bandwagon especially if that bandwagon runs on batteries."
http://www.planetpdamag.com/content/052202rt.htm

There have been many debates as to which is the ultimate wireless technology that will prevail, and I fully subscribe to the suggestion that Bluetooth is a wire replacement technology, whereas 802.11b is more suitable for network connectivity. However, in certain environments, Bluetooth can be an attractive option for setting up a network.
http://www.oreillynet.com/pub/a/wireless/2002/11/21/bluetooth.html?page=last&x-showcontent=text

802.11 is still prefered in most environments imho.

Impartial @ 1/14/2003 5:29:13 PM #
Access point-to-PDA connections CAN be beyond class 3 range. The access point has an enhanced antenna that can pick up the class 3 signal from a longer range. Thus, PDA-PDA or PDA-cellphone range is 30 feet, and PDA-WAP range or cellphone-WAP range is around 100 feet.

Am I helping yet?

Bluetooth will never replace 802.11 because they are fundamentally different and serve different purposes. BT's bandwidth is pitiful in comparison, but for what it does, there doesn't really need to be much more. Possibly in the future, a successor to BT or 802.11 will integrate BTs low power requirements with 802.11s range, but until then, I find it annoying to try and adapt BT applications to ones better suited bt 802.11.

Why doesn't someone create some sort of battery powered unit that one one hand connects to your PDA via bluetooth, and links you to your 802.11 wireless network on the other side. Take along something the size of a pack of cigarettes to "boost" your power.

If they are coming out with a 802.11 SD card, such a unit could be loaded up with battery storage.

Would something like this be compatible between the two wireless protocols?

Possio PX20 is an access point which combines both Bluetooth and WLAN into a single device.
http://www.possio.com/split.asp?cat=3∏=wireless&dynfile=px20product&id=english&dh=3

Am I helping yet?

My home network uses a Linux-powered server with cable modem. From there, a router leads to a couple of desktops, one running Linux and another Windows.

I assume most BT access points will only connect to Windows initially, so can I hang the thing off the Windows desktop and still have it work?

Admin @ 1/14/2003 3:19:04 PM #
Yes, this has ethernet and regular phone ports. You could configure it to connect directly to your cable/DSL line or use DHCP and connect to your existing router.