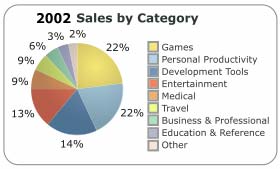 In the "Stat of the Year", Handango reports that software spending for 2002 increased more than 40% compared to 2001, based on same store sales data. The average mobile software selling price was $18.25. The top 3 selling Palm OS applications according to Handango were SilverScreen, Bejeweled and the SplashWallet Suite. The full 2002 report can be found here.

The Special Edition highlights user interests with a report on the top mobile software search words for 2002 as well as the top search words for each operating system. The top 10 search words in 2002 were games, dictionary, bible, remote control, chess, maps, mail, medical, golf and MP3/music.

Fourth Quarter: Strong Holiday Sales, Higher Uptake
In the fourth quarter, the market for mobile software continued its rapid growth, fueled by a strong holiday season and growth in the number of applications purchased per user. The overall market grew substantially in the holiday season with more than 38% of sales occurring in December. Fourth quarter sales increased 47% over the fourth quarter of 2001 on a same store sales basis. Contributing strongly to this growth was an increase in the average number of applications purchased. The average buyer added 2.1 applications to his/her handset, up strongly from 1.8 in the third quarter.

More than 38% of sales in December

kezza @ 2/13/2003 1:47:36 PM #
why would someone with a zire buy any of the top 3 items? bejewelled is the only one that makes any sense, even though it runs really sluggish on anything less than a 33mhz processor. there isn't even enough room on a zire for the entire splashwallet suite, nor for the full version of vindigo (in the top 5). methinks more color and/or hi res handhelds were sold in the past year than in any year previous, and more consumers wanted to take full advantage of their screens.

That's why the m100 series has junk compared to the m500 in terms of accessories.

I don't mean to bash PalmGear, or do I have any monetary benefits/whatsoever by doing so. I am a developer myslef and sell my products at both Handango and PalmGear. Pro: PalmGear has a wider audience. Pro: PalmGear is cheaper than Handango, i.e. they take less royalties as Handango (up to certain extent). Big, Big Con: PalmGear's service is real rubbish!

I believe, through my experience, Handango is much more professional than PalmGear. In my almost 1 year affiliation with PalmGear, I have encountered many problems, especially when information relay is concerned. Some e-mails of mine are very slow to reply or does not get replied AT ALL. I have to e-mail PalmGear concerning the SAME subject OVER AND OVER AGAIN! PalmGear has made many errors (some of them are totally UNFORGIVEABLE) concerning my royalty payments, and the response is indeed slow, and unprofessional. It is very obvious that the fault is with PalmGear, but all I get is excuses, and more excuses, plus a redirection of the blame to someone else! Orders for my product are sometimes notified late to me, and I get complaining e-mails of people not receiving registration keys for over a week, when I have just received the order a couple of days ago.

I wouldn't say that Handango's service to developers is excellent especially with the price I am paying for it (very high royalties), but I encountered less problem with them. Once I realised my product wasn't selling well with Handango, and e-mailed a complaint. Within a week, I received an e-mail from them about marketing options, etc, and hey, after 2 weeks, we worked together and my sales jumped so much. I am indeed very pleased.

I know I will be bashed by you guys for revealing my complaint about PalmGear in public, and seeing that you guys are their fans. But from a developer's point of view, Handango is much professional, with less problems, and are quickly solved.

It is not a wonder why PalmGear does not have these sort of statistics for their sales, considering how messed up they are in their organisation. I am not surprised.

PalmGear.com @ 2/18/2003 3:38:37 PM #
I'm delighted to hear that you are selling more
software via PalmGear.com than any other location on
the web. Yet I'm troubled that you have unresolved problems. As many will attest that is not the norm for us.

Please contact me directly at the number below so that I can assist you immediately. You may email me at Kenny.West@PalmGear.com

http://www.palmgear.com/
"THE Source for Your Palm Powered World!"

i wonder what the most bought program of all palm time is.....

I don't see how an upward growth in Handheld software sales be an indication of defying the economy. As a pricing prefessional, I would expect to see an upward growth in this market because its a lower cost comparative to other entertainment alternatives (Handheld games are cheap thrills!- I like them!), and there seems to be more aggressive pricing for them. If they didn't see growth, that would be indicative of lousy management. Despite a slight decrease in handheld units sales year over year, it's still outpacing computer PC sales. I get weekly emails from PalmGear.com, and I've tended to buy more software because of increased product knowledge and awareness. Because its cheap, I don't feel pain when I decide I don't want to use it anymore. You can't do that with PC software where it costs an average of several hundred dollars.