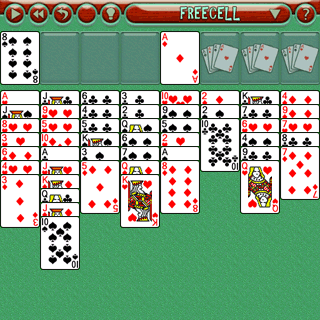 Patience includes eight unique solitaire games into one package for the low price of $8. The games include such basics asKlondike, Fifteens,Yukon, and FreeCell. In addition to those, there are also the lesser known games of Golf, Scorpion, The Wish, and La Belle Lucie. Every variant features unique game play, in addition to a detailed set of instructions. Most players will know how to play typical games like FreeCell andKlondike, but the rules inherent in many of the alternatives leads to a new challenge for nearly everyone.

Graphics
To be blunt, there isn't much you can do to decorate a set of cards, especially when limited to PDA screen resolutions. Despite the fact, the folks at Kickoo were able to create not only one interesting set of cards, but three! With three unique styles of cards to choose from, you're sure to find at least one to suit your tastes. Aesthetically, the layout is pleasing, and easily one of the prettiest card games, although this comes at the expense of visibility. The cards are small enough from the beginning, and in some games, when tall piles appeared I found myself squinting. Other than the cards, however, there is very little graphically to comment on. The background is pretty, and the menu design is well thought out, but the cards are still the primary focus of the game.

Options
One of Patience's advantages over many card games is the amount of customization. No two people are the same, so why should they have to use the same settings? Some of the choices, for example the volume of the sound effects and animation, are fairly typical. On the other hand, it's nice to be able to choose fun little things like the color of the card backs or the design decorating the front of the card. The options menu also gives you the ability to choose the ergonomy (how many times you'd like to tap the screen) in addition to the use of foundations. Kickoo even included the ability to enable some minor variants in a couple of the games.

Finishing Touches
In any game, the little things may make the largest difference. As a result, Patience is one of the best card games I've seen to date. Some features, despite being unessential, have been added to enhance the overall quality of the game. This includes extended undo and redo buttons which enables you to work your way back tothe very beginning of the game. Of course, if you don't want to leave divots in your screen from hitting undo all of the way back to the beginning of a game, you can save time by hitting the restart button. One nice aspect to the undo button is the fact it will save your moves, even if you exit the game. You cannot, however, begin one game and switch to another game  if you switch variants your game will be considered lost. 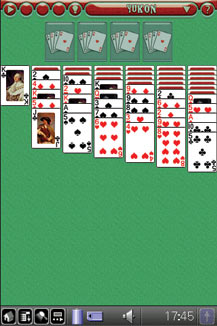 Patience also keeps track of your statistics and includes a nice internet high score board (for registered users only). The scores can be submitted online with a code generated by your device, with independent codes for each type of solitaire. The game also includes a hint feature, for those tricky moves, in addition to end-of-game detection. There are also countless other minor features included in the game to give this game a polished look. Amazingly, the entire program fits into just over 360k.

Conclusion
Patience is a great little card program, and with eight different games you're sure to find at least one you'll like. The graphics are easy on the eyes, and you can easily customize the program to fit your preferences. Even the minor details have been taken into account in order to create a well balanced program. And, for only $8, the game is an amazing value and a purchase that would be difficult to regret.

Cheap Price for Passing the Time

I have all three Kickoo games and they are great, some of the best Palm game makers in the world, nice job guys.

palmmongrel @ 7/26/2003 9:29:38 PM #
I was really excited when I saw Kickoo was releasing another game - their graphics are 2nd to none... However, after five minutes of trying to play this (on a beautiful Zire71 screen), I've come to a conclusion: Kickoo Patience is to Acid Solitaire as Pocket PC is to Palm. Basically, the graphics they squeezed onto the small screen are too much like a desktop counterpart to be practical on a handheld.

"Graphics TOO good?!" Kinda... the reason I make the PocketPC/Palm equation is that Acid Solitaire did the handheld graphics right - the card graphics are smartly designed for a small screen. With Patience I found my self not really _squinting_ at the cards, but missing lots of obvious moves because the tiny little hearts and diamonds all get lost in eachother. I thought it was pretty unpleasent, and suggest sticking to Acid... at least for the two solitaire versions they provide.

Other great Solitaire Games Out There

My current favorite all-in-one is Eric Snider's Solitaire from http://www.sniderware.com/. It has really sharp graphics, a nice variety of backgrounds, and a smart auto-completion engine. The one fault is the lack of customization for game play.

I like the variety on Handmark's Super Solitaire 15, but the card faces don't look good in high-res, and I think some of the UI is really clumsy.

RE: Other great Solitaire Games Out There

IMO, if one likes to twist cards, it ends here.

RE: Other great Solitaire Games Out There

FerdFerd @ 7/27/2003 4:24:33 PM #
Is it a coincidence that this game is named the same as the venerable collection of freeware solitaire games called Patience. And its color successor, Patience Revisited 2.6.2, also free? The latter, at least, is still at PalmGear.

bcombee @ 7/28/2003 4:37:50 AM #
Well, "patience" is a generic name for all these different solitaire games, and the full name of the program is "Kickoo's Patience". The PIC reviewer just left off the first part of the name.

volcanopele @ 7/28/2003 3:52:27 PM #
Just looking at the high score table over at kickoo.com for Patience (mainly to make sure I am still in first place for Klondike), and I noticed that the reviewer has an incredible obsession with FreeCell. I mean 200 consecutive wins!!! Wow. How do you do it? I am okay at Klondike but admittedly FreeCell is beyond me.

RE: pepper's obsession with FreeCell

RE: pepper's obsession with FreeCell

There was a time with no PDA...
How was it possible to live ?