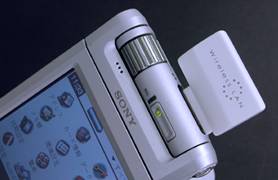 The LAN card has a specified transmission range of approximately 37m (120 ft) indoors at a transmission speed of 11Mbps. It also has security functions compatible with 64, 128-bit WEP and ESS-ID. It's dimensions are 1.38 x 2.99 x 0.22 in (W x L x H) and it weighs less than .4 of an ounce or 9 grams. The unit draws power from the handheld itself.

When first announced last year, the company also announce a Bluetooth memory stick as well as SDIO Wifi and Bluetooth cards. Brighthand is reporting that these more than likely not be released.

The card is compatible with the following Sony Clie models: PEG-TJ27, PEG-TJ35, PEG-TJ25, PEG-UX40, PEG-TG50, PEG-NZ90, PEG-NX70V, and PEG-NX60. Noticeably absent is the NX73 and NX80, which are not compatible with the software driver. It can be purchased for $129 USD from HCL electronics.

It seems those of us Sony people still on OS4 get the shaft again. I mean come on there was a ton of these things sold.

And the choice not to pursue their other wireless cards is pretty stupid. You have many PalmOne users out there that don't even have Bluetooth or WiFi built into their handhelds that would benefit from these cards.

I know most file managers can use either, and the same spectrum of periferals is currently available for both (VGA Camara, Bluetooth Card, and now WiFi, etc.), so what makes the drivers that much easier to write for MS than SD?

The Federation for the Responsible Use of Acronyms

phoneboy @ 4/6/2004 1:51:06 AM #
Has anyone else noticed that the thing looks like it will break in half if it gets bumped? It looks as if it may damage the MS slot in the process. I had enough fear with my relatively small Bluetooth MS sticking out. Integrated is the only way to go.