As the era of the Universal Connector (2001-2003) on Palm handhelds just about draws to a close, palmOnes final UC accessory has sort of flown under the radar, due in part to spotty retail availability, dwindling numbers of UC-enabled Palms and a high retail price. Unlike the regular in-the-box cradles, the Mini Cradle has a unique, modern design complete with built-in lighting and a silver metallic base. 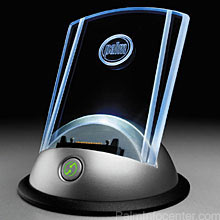 Installation
The Mini Cradle is plugged exactly like the standard palmOne USB cradle. I just unplugged my old cradle and plugged this one right in. I did notice immediately that the Mini cradle has two separate cables running from the rear of it-one is the USB cable and the other is for the AC plug. On the older Palm cradles, there is just a single USB/power combination cable that ends in a pigtail where the AC adapter is then inserted, slightly minimizing desk clutter.

Impressions
Lets face it, most folks are going to buy this cradle solely for the purposes of aesthetics. In this regard, the Mini cradle is a smashing success. The actual cradle base itself is dull silver plastic with a black rubberized coating on the bottom to keep it from sliding around a desktop. Size-wise its about half of the size of an old Palm UC cradle. Its weight is less than the old m500 and later H or "E" USB cradles. In fact, its even less than the newer OS5-era cradles (and I though those were light to begin with!)

The Universal Connector plug itself is black and the back plate of the cradle is a hazily translucent clear plastic. Its remarkably smudge & fingerprint-resistant and is illuminated by two bright white LEDs that are recessed into the base of the cradle. The overall effect is one of sleek modernity thats also very soothing to look at in a darkened room. Ive yet to encounter anyone who didnt make a point of mentioning that fancy cradle on my desk. Its in no way tacky looking and exudes a sense of professionalism, which is probably why palmOne wants to charge the eye-popping sum of $50 for it!

All Hotsync and charging operations functioned perfectly. I have had some issues in the past with trying to get newer UC-enabled Palms to seat properly on the old cradle. Most notably, the Zire 71, T|C and Tungsten T series have all given me some problems. I am happy to report that its a good bit easier to make a solid connection with my T3 on this cradle. It offers a faint click when latching onto the handheld as well. I have not had the opportunity to test any Palm other than a Zire 71 and my T3 on this cradle but both latched on with no difficulties. Speaking of the Zire 71, the green illuminated Hotsync button is especially useful for the particular Palm model, as it does not have a charging LED on the handheld itself. The cradle will work with any palmOne handheld that has the UC, which includes the: Tungsten C, W, T, T2, T3, m500 series, i705 and Zire 71. 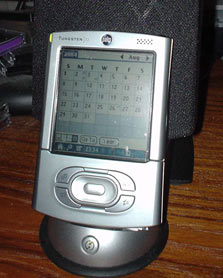 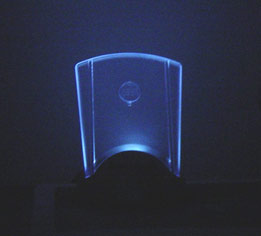 My main complaint with this cradle is simply that its too light. The thin plastic base just slides around with minimal pressure on my wooden desk. When initiating a Hotsync, I sometimes have to secure the cradle with one hand while pushing the sync button with my other hand. Ive taken to letting the cradle rest against my speaker so that I can hit the sync button with one finger.

Conclusion This is what Palm should have been bundling with the OS5 UC units starting with the Tungsten T. Its about as stylish a product as Ive ever seen from Palm Inc (aside from the original V) and is worth purchasing if you need a spare cradle and dont mind spending a few extra bills. PalmOnes $50 MSRP is just way too much money for this product, however, so Id recommend taking a look around online for a better deal or grab it from the palmOne online store. I picked up mine on Amazon for around $30. If palmOne ever releases another UC enabled handheld in the future, itd be nice to see include this cradle with it to give another small incentive to purchase a higher-priced Tungsten.

GregGaub @ 8/6/2004 10:10:30 PM #
palmOne seems to be moving to mini-USB connected devices rather than Universal Connectors. Personally, I hope they stick with UC, but I have a feeling it will be otherwise.

The article obviously showed it to be UC, but the title needed clarification. I wonder if a mini USB cradle (mini USB connection) would fly if introduced. Thoughts, people? I personally think syncing with bluetooth and only hooking up a charge cable would be my style when I get a Zire 72.

Wollombi @ 8/7/2004 2:00:16 AM #
Personally, I like having a cradle better. Oh, I have a cable for travel and work, but on my desk a cradle provides a little more organization, and it's just more aesthetically pleasing IMO. Also, I like being able to stand the Palm up in the cradle and have it double as a clock or a dynamic photo album while it is charging.

Bluetooth hotsyncing works OK in my experience, but it it significantly slower than USB. I estimate that it doubled or tripled my Hotsync time.

Yuk Yuk. Is this comment a play on words "from cradle to grave?"

Not an appropriate buy IMO

vesther @ 8/7/2004 1:35:37 PM #
I realized after knowing that PalmOne is swaying away from the Universal Connector that I have to declare this one not an appropriate buy. My main complaint is that you cannot darken your room unless you unplug the Power Outlet for this baby, so stick either with the standard cradle, or just steer away from this baby, since future PalmOne handhelds will not use this kind of cradled connector anymore.

RE: Not an appropriate buy IMO

In the future: Bluetooth replaces IR, there will be a Bluetooth Keyboard, there will be a new, more cost-efficient connector with a HotSync Button (which should be an amalgamation of Apple's iPod Dock Connector and PalmOne's Universal Connector Cigarette Cable) with dual-charging capabilities.

My ideal Connector for PalmOne Handhelds: HotSync/Charging Combo Cable that can be charged through a FireWire Connection and an AC Adapter Plugin, ala iPod Cable.

Must be a slow news day

A proud member of the anti-Ska faction!

RE: Must be a slow news day

hkklife @ 8/8/2004 9:15:35 PM #
I don't have a T|E, a Clie, or a Garmin. I wanted to get a quick review posted on PIC and I decided to use a peripheral that I had purchased a few months ago and had immediate access to. I'll gladly write another review in exchange for any of the above items ;-)

I just figured that since these UC USB cradles are popping up on the 'net for low prices nowadays, some folks might want to snag one for sentimental purposes or the cool factor or whatever. I really hope that this isn't that last PalmOne-branded cradle that we'll be seeing, however. They need to reissue this one in mini-usb flavor and price it a bit less. Addiitionally, PalmOne needs to standardize on a location for the charger & mini-usb ports (hopefully on the bottom where the current UC is and with no Zire 31-style flap over them) so that such a beast can be produced.

If this thing had been released 2 years ago at half the MSRP, there would be a great deal of interest in it, IMHO.