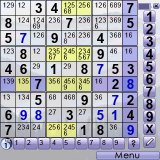 In these dark days for Palm OS users, any kind of new software or version updates is a welcome sight. Long-time developer Astraware has just released the latest version of their superb Astraware Sudoku game for Palm OS devices. Bearing version number 1.50 and dated March 19th, this new update offers a graphical facelift as well as what they are calling "Improved puzzle handling". In addition, support for a number of additional European languages has been added to the program.

This game's previous version update (1.40) occurred in August of 2007, so this is a nice surprise indeed. As always, registered users of Sudoku can upgrade to the new version at no additional charge. The device is optimized for 320x320 Palm OS devices and unfortunately does not natively support 320x480 screens. It is also available for Windows Mobile devices.

Very strange. I just looked the files from this update and here's what I see;

RE: Is thikss old news?