Palm OS is the market share leader in the U.S. retail handheld market. Based on new data from the NPD Group, the Palm OS US Retail share grew 10 points over the year, mainly on strong sales of the palmOne Tungsten E. 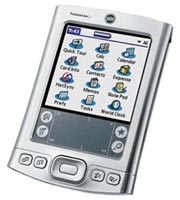 Based on data released by the NPD Group, a retail sales tracking firm, U.S. unit share for Palm Powered handhelds in September 2004 was 76 percent, exceeding that of all of its competitors combined, and gaining roughly 10 points since September 2003.

According to NPD, Palm OS market share was boosted by strong sales of palmOne's handheld products, particularly the Tungsten E, which accounted for 29 percent of all handheld sales in the month. Other Palm OS licensees also contributed, with the Garmin iQue 3600 standing out as the most popular handheld priced over $400 in September.

Retail sales as measured by NPD include sales through retail stores, e-commerce, and distributors. NPD tracks retail sales of handhelds through a combination of domestic retail sales reports and weekly surveys of approximately 35,000 U.S. consumers.

Something's fishy here. The T|E doesn't even have BT.

Where did you get the word "WIRELESS" from?

Just retail, not the whole picture

ginsberg @ 11/23/2004 7:40:40 PM #
While this may appear to be good news for Palmsource and palmOne, all it really shows is that they continue to dominate the consumer PDA market. Retail is where PDAs are mostly bought one unit at a time. It would be interesting to see what the unit volumes are behind these percentages.

I'm not disputing the accuracy of the data, just that it only presents a partial picture of US PDA market activity. What is missing from this data are Dell Axim direct sales, the vast majority of RIM BlackBerry sales and perhaps half of all HP iPAQ sales. Not to mention the minor brands that cannot get major retailers to carry their products.

A good measure of PalmSource success is their quarterly financial statements. Their revenue has been trending mostly sideways since they became a public company about a year ago. In mid-December we will be able to get a 2004 vs. 2003 comparison of comparable quarters for the first time.

RE: Just retail, not the whole picture

I for one have bought only one of the dozen or so PDAs retail. The vast majority of them came from the Internet retailers. Even the one I got from Circuit City locally was a demo closeout that may not have gotten in these numbers.

So the bottom line? PalmOne is in trouble and even though PPCs are taking more market share the overall market is still dead and each maker is selling fewer and fewer models at lower and lower profits. Note that HP has raised prices on their bottom end models by nearly $100. That portends even further lowering sales.

I hope the Treo line makes it or we may just not have any handhelds left to run full apps the way we are used to.

I wouldn't be surprised if a least small part of the reason for the pricing of the T|E2 wasn't to sell T5's, but to make the Z31 and T|E look like great deals in comparison, mostly to retail consumers, since the lower-end models probably constitutes a much greater revenue opportunity than a new high-end PDA running Garnet.

And any fashion/jewelry buyers seems to have migrated to Treo 6xx's.

Tamog @ 11/28/2004 11:05:53 AM #
Hi,
I think that PalmONS's main income definitely comes from the low Zire line. Eveybody can afford one, and they are still damn cool and can do enough for eveyone(Z31 and TE). The Tungsten T3,T5,C, and even the Zire72(s)-see my blog about it- are more appealing to business or richer customers.
But, as people het pooere, prices need to drop, not rise!

Find out more about the Palm OS in my blog:
http://tamspalm.blogspot.com

If you're referring to HP's built-in "iTask" utility, that doesn't count. It's up to Microsoft to build a fast switch feature of some form into the OS itself.

I mean, this is like saying PalmOS should have a filesystem.

All the wringing of hands over the T5/650 memory layout are reminders of why the Palm OS should NOT have a filesystem! They chew memory, and slow everything down!!

Where does it come from?

This is especially unbelievable. The iQue is probably the only PDA I've actually never seen anyone use outside of a store. Maybe they meant "the Garmin iQue 3600 standing out as the most popular handheld with built-in GPS, made by a company who's name starts with the letter "G", priced over $400 in September".

Money talks. You know what walks. Wake me up when Palm is actually making any profits again.

Foo Fighter @ 11/24/2004 10:06:48 AM #
You're lucky then because I've never seen either PDA (iQue or Zodiac) outside a retail store. And I've been told by the sales reps that both products are horribly unpopular and in the case of the Zodiac, has a high return rate.

hkklife @ 11/24/2004 11:09:34 AM #
One of the Zods was bought by one of those "console maniacs" who has made it a mission to own one of every portable gaming machine made. The other was, I think, being used as a stopgap machine by a frustrated T3 owner. I'd not consider either a "normal" handheld owner and certainly not the type of person who might stroll into a CUSA, be pleased with the Tapwave retail display and decide to buy a Zod instead of a T|E, for example. At my local CUSA the Zodiac display has fallen into increasing disrepair and neglect and the unit on display wasn't even working last time I was there. Not a good sign!

The_Voice_of_Reason @ 11/24/2004 4:22:17 PM #
I don't know how Tapwave's doing with Zodiac sales, but I stiil say they should consider releasing a small non-gaming PDA with similar specs as the Zodiacs. They seem to be fairly well constructed and would probably get quite a lot of sales to those people who have given up on Palm and its poor quality/limited features.

Of course, I wouldn't object to WiFi (BT is a given, as that's what's already in there).

Of course, I wouldn't object to WiFi (BT is a given, as that's what's already in there).

I think they could fit everything into a shell the size of the Tungsten E. Add an OLED screen to save battery life + appear cutting edge. I'd gladly pay $400 for this Tapwave Tsunami*.

*They owe me a free one if they choose this name!

reinbeau @ 11/24/2004 6:21:37 PM #
There are plenty of iQue's 'out in the wild', a guy I work with has one, I've got one, and I've seen two people on the road that have one. We also have a very active forum over on PDA Street devoted to the iQue. I was surprised to read that they merited mention in the Palm OS sales figures, but I know people are buying them. They're a gread PDA, and the GPS is nice, too!

Hal2000 @ 11/24/2004 10:13:39 PM #
Watch me use my zodiac live, M-F eating while eating lunch on the west side of NYC. Just stop asking me where to get it.
Be amazed as the slim built unit effortlessly fits in a front jean pocket. Relive the days of NO PROBLEMS and fun. Thrill as your palm handheld saves the day in front of Donald Trumps' nearest competitor in real estate (my boss).
F. OS6.

hkklife @ 11/25/2004 12:22:29 AM #
Again, if anyone from Tapwave is reading this, please see if you can PRY the UC standard from P1's nearly-dead fingers. The Zod fans are chomping at the bit for a better selection of travel chargers, car chargers, retractable sync cables etc etc. This would fit the bill perfectly and guarantee a sale to nearly every existing Tungsten owner out there looking to upgrade. Don't worry about not fitting sleds or cradles--cable compatability would be enough!

And please, a better web browser too!

Tamog @ 11/24/2004 3:03:23 AM #
Personally,
I am a little confused about the comment about the Ique Sales. I think that the Ique sells more to people who want an intelligent GPS system then a PDA. Thus, they will use their handheld as GPS machine, and not somuch as appontment planner, gaming tool,....
Altough this may not be the exact purpose of the Ique, it seems to boost sales pretty well! Maybe the Palm OS will get itself a firm stand in the GPS sector. It is way more usable than the Vxworks and other systems that are commonly used in this sector. They may be stable, but they lack 3rd Party Support!
Find morePalm Info in my blog:
http://tamspalm.blogspot.com

SeldomVisitor @ 11/24/2004 5:48:48 AM #
It's always important to know what a "report" is reporting and whether or not the report is even accurate at all or reflects some sampled population that might not even be representative of the general population.

This report, as pointed out previously by another poster, is for retail sales in the US only and does NOT even mention unit sales but simply percentages of total sales.

And we have no idea how accurate it is anyway!

How is that surprising? What did Palm offer that was OVER $400 in that month? Last I checked the T3 is under $400 and so is the TC.

Michael Mace @ 11/24/2004 1:48:09 PM #
>>It's always important to know what a "report" is reporting and whether or not the report is even accurate at all or reflects some sampled population that might not even be representative of the general population.

You can get lots of info on NPD at their website: http://www.npdtechworld.com/ They are the main sales-tracking service covering the US consumer electronics industry, and they track sales directly by collecting the info from the resellers. Pretty much everyone in the industry uses them to track sales.

That is what the report says -- that the iQue was the best-selling handheld model in that price range for the month.

A little background information on "Seldom Visitor," who actually frequents many of the Palm-related boards. He is also known as Hengeem on the Yahoo Finance board.

SV/Hengeem is an admitted day trader, who is only interested in rumors and innuendos, not facts or reasons. If I were you, I wouldn't even waste my time trying to explain things to SV/Hengeem. It is like trying to convince Saddam Hussein that he was a ruthless and ineffective dictator.

Find out more about the Palm OS in my blog:
http://tamspalm.blogspot.com

"Success is relative: It is what we can make of the mess we have made of things." - T.S. Eliot