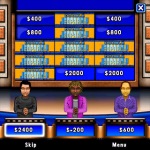 Handmark today released two new games for smartphones. The company has released mobile versions of the popular TV game shows Jeopardy! and Wheel of Fortune for Palm OS and Windows Mobile devices. Jeopardy! Deluxe features questions and content from the show, custom avatars, animated game elements, transitions and a realistic interface that simulates the TV show. Wheel of Fortune Deluxe also features the same elements and interface from the TV show. It has three modes of play (solo, against the computer and toss-up rounds). You can even get fresh daily content with Category of the Day game mode.

Both titles are available now from Handmark for $14.99 each. At this time, there does not appear to be trial versions. Video demos of each app can be viewed here.

don't they have better apps to write than this?
what a waste of money.

Alex: As of 2009, what is destined to become the most sought after mystery in the western world?

Contestant1: What is Sasquatch?

Contestant2: What is Lochness Monster?

Contestant3: What is a living Elvis Presley?

Alex: I'm sorry folks, but the answer should be "What is Palm OS Nova running on breakthrough new devices."

It's pretty obvious "Red" works for Handmark. This is just an ad disguised as a review.