As a result of the settlement with Acer, Inc., the second quarter of 2005 GAAP and non-GAAP financials benefited from $2.1 million in revenues reported under license and royalty revenue, as well as a decrease in operating expenses of $0.5 million. 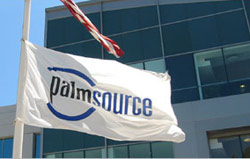 "Although we generally performed to our financial expectations during the second quarter, we are not satisfied with this performance," said David Nagel, president and CEO of PalmSource. "However, we did see some encouraging signs for our future, as in aggregate, our licensees reported shipping the largest number of Palm Powered smartphones for any quarter, and we continued to see a larger portion of our business come from that category. We also saw growth in the Palm Powered Economy, as we added three new partners for our Palm Powered Mobile World Program, signed three new ODM partners in Asia and three of our licensees introduced new smartphones worldwide."

Strategy to Broaden Product Portfolio
"Over the past year, we have focused our strategy and resources on new growth opportunities," said Nagel. "These efforts resulted in the release of Palm OS Cobalt 6.1 in late September of this year, which was our first product specifically targeted at the smartphone market. Palm OS Cobalt products are in development and we hope to see the first of these devices in the market in the earlier part of calendar 2005, although the exact shipment dates depend on the specific product decisions of our licensees and carriers."

"On December 8, we began the next phase in our strategy with the anticipated acquisition of China MobileSoft Ltd. (CMS). Besides a cost-efficient engineering and support team that we believe will help us penetrate China more deeply, we believe the expanded product portfolio we will acquire will put us in a position to achieve our long-term goal of becoming the leading provider of software for phones and mobile devices at all price points."

The pending acquisition of CMS is expected to give PalmSource access to more than 10 new CMS licensees that have already shipped applications in over one million phones and 30 different phone models. It is anticipated that in addition to these new licensees and a broader product portfolio, CMS will enable PalmSource to expand its presence in China with cost-efficient, localized engineering and support. According to market data from the China Daily Herald (Nov. 2004), China is one of the fastest growing mobile phone markets in the world. China currently has 320 million mobile phone users and is adding approximately 5.5 million new subscribers each month.

Business Outlook
For the third quarter ending February 25, 2005, the Company expects revenues will be between $18.0 million plus or minus 5 percent. Within this revenue range, GAAP operating expenses are expected to be approximately $17.5 million, and GAAP loss per share to be between ($0.11) to break-even, assuming 14.7 million basic and diluted shares outstanding.

Anticipated Impact of China MobileSoft Acquisition
PalmSource anticipates that the pending CMS transaction will close sometime in its third fiscal quarter, which ends February 25, 2005, subject to and following approval of the transaction by CMS shareholders. Due to the uncertainty as to the timing of the closing of the transaction, PalmSource has not included any potential impact of this acquisition in its Business Outlook for the third fiscal quarter. However, based on information that is currently available, which is subject to change as indicated below, PalmSource expects the following impact on its financial results related to the acquisition of CMS for the remainder of fiscal year 2005, ending June 3, 2005:

(*) The exact amount of the expense for stock-based compensation may cause actual GAAP and non-GAAP operating expenses to differ from these ranges because it is dependent on the closing price for PalmSource common stock on the day the deal is approved by CMS shareholders. Additionally, any write-off for in-process research and development is subject to change based on an independent third party evaluation following the close of the acquisition.

cbowers @ 12/22/2004 8:30:48 PM #
"Although we generally performed to our financial expectations during the second quarter, we are not satisfied with this performance,"

Hint, PalmOne's current lineup isn't going to get it done for you. License license license... Start with the brands already demonstrating successful PDA products, and then entice back the smaller highly innovative types that you priced out of the market.

If I read this right, they really didn't make much of a profit at all. Merely recouping revenue earned from Acer in previous quarters.

what is the source of palm?

Palmsource needs to generate some excitement soon. Dump the remnants of Clarisworks, sync 1:1 with the defacto standard of Outlook (and find a way to allow older devices to be upgraded, too). Keep licensing the OS to more innovative companies, stand behind them. Get the "Zenmasters" back in charge and stop the balkanization of the APIs between competing companies.

Another year of crippled devices like the T5 and Treo 650 out of PalmOne and Palmsource might not have anyone left in business to buy their product.

vesther @ 12/23/2004 10:50:37 AM #
I would also wished that PalmSource would start working with Apple to make their PDA Software work better with the Mac. Mac Support is what PalmSource needs!!! I'm talking UNCONDITIONAL Mac Support.

Sony is still manufacturing PalmOS devices for their home market. For this, they need a license.