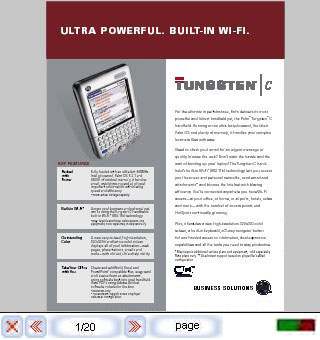 PalmPDF from MetaViewSoft enables users to view native Adobe PDF documents on your mobile device. It has support for anti-alaising and truetype fonts and five way navigation. It is based on the open source Xpdf program.

Its really nice to be able to read PDFs on your Palm, and the fact that this is based on Open Source codebase makes multiple and very important points.

It would really be nice if the author could address some of the warts:

- Clean up the interface: Currently, the UI is decidedly non-PalmOSish, and gets in the way. There shouldn't be anything on the screen apart from the content unless one taps the menu button, and what appears then should conform to the way we expect PalmOS apps to work. The current interface *requires* you to use your stylus to get anything done. Also, I'd describe the interface as "cute", and "cute" gets in the way, if you know what I mean. :)

- Use existing ways of doing things instead of reinventing the wheel: For example, rotation of the document should be achieved using the available "rotate" facility on Palms that have that feature, or via a clear menu option, instead of the non-intuitive way it is being done now.

- Consider easier zooming: For example, pressing one of the hard keys should active a zoom-in feature that remains active and controlled by the 5-way navigation pad until that hard key is pressed again. This allows for improved 1-handed usage.

This is a great app, and I would like to thank the author for doing tons of PalmOS users a gigantic favour.

I think you have to look at this project as a 'work in progress' for a crucial application that Palm themselves should really get behind.

The user interface side of things is non-standard, but I guess that is the result of most of the code being ported from a desktop-based PDF viewer. The good news is that the rendering engine seems to work brilliantly on the PDFs I've tried and the UI is really the icing on the cake and will be easier to fix-up than the underlying engine.

Also, when all of the debugging info has been removed and the program is fully optimised for Palm, we could be in for an even better PDF experience.

Keep an eye on this project folks - the developer is single handedly tackling one of the holy grails of Palm-owning road-warriors around the world!

Palm PDF is already the most useful new software I've installed on a Palm device in years. I expect we'll see continued improvement, especially if satisfied users send some "love" in Henk Jonas' direction. PayPal is your friend.

Those of us to whom PayPal is unfriendly can, instead, pay for some of Henk Jonas' other software through pdassi:

Agreed - after years of that lousy Adobe version which required "converting" something unfortunately named a "portable document format" into something readable on a portable device, we now have this gem.

It works extremely well, ain't the prettiest controls yet - but give him time, even supports Zodiacs! Send a little encouragement and ca$h in the developer's direction.

Flash Sheridan? Is that you?

Are you still at PalmSource? How's the hiring attempts going?

Hope you don't get caught in the fallout, old Buddy.