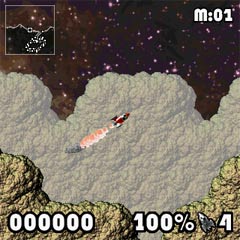 
Moon Fighter is a challenging new title developed by Pazzazz Games and published by Astraware. This welcome release fills a void not only in the companys catalog but in the Palm games market in general. Harkening back to classics like Lunar Lander or Gravitar, Moonfighter takes classic gravity-oriented gameplay and adds Asteroids-style rotating shoot em up action.

Astraware thankfully doesnt even try to give the game a backstory or any cinematicsits just endless action from start to finish. All game levels take place in a series of underground caverns. In an interesting and sadly unutilized touch, your ship CAN fly above the surface of the planets but there are no gameplay objectives in these areas. Hint for Astraware: rescuing stranded colonists (ala Defender/Choplifter) or receiving weapon upgrades at a bunker should be incorporated into MoonFighter II! Your ship zooms around through some very harrowing terrain that grows increasingly difficult with each new stage. Judicious usage of the thrusters is key to avoiding collisions with the walls, floor and ceiling of the cavern. Level horizontal flight IS possible but only for the briefest of moments.

In addition to these exercises in booster rocket physics, you must contend with increasing numbers of enemies. The earliest levels feature only gun turrets but subsequent areas offer flying saucer gunships, mechanical spiders and forcefields. I noticed that some of the enemies are very aggressive in attacking your ship while others merely fire only when you are in immediate proximity. Your craft is limited to a single weapon that cannot be upgraded or fired rapidly. A tiny radar screen is thankfully provided in the upper left corner of the screen.

While the initial stages are nearly devoid of enemies, things begin getting nasty by the sixth or seventh level of each difficulty level. Simultaneously having your shields at 10%, four enemies onscreen and the cavern floor just a few pixels away makes for some sweaty palms indeed (pun intended)! Unfortunately, unless you are a die-hard shooter aficionado, most players will be like me and probably begin to tire of the game before they can plumb its upper difficulty levels. This simplistic charm that makes the game so accessible also proves to be its downfall. I found the sweet spot to be ~10 to 12 levels in on each difficulty level. Those stages proved challenging enough to give some serious gaming goodness during a lunch break but not difficult enough to make me want to smash my TX! I actually found myself playing the random Infinite Moons levels after playing through the training tutorial but prior to playing straight through the insanely difficult Veteran & Ace levels. 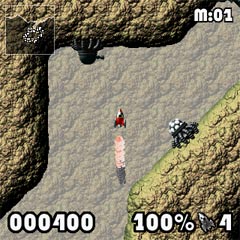 The game thankfully offers a series of training missions that can be skipped by advance gamers. Even for novices, these are pretty simple and do not really prepare the player for the actual rigors of gameplay. Five difficulty levels are available and even Cadet, the easiest of these, soon proves to be challenging enough.

Four main controls are present: rotate left, rotate right, fire, and thruster. I found it necessary to remove my TX from its hardcase to have any hope of succeeding in this game. I think the traditional left to right Palm "straight" hard button layout would make for far easier gameplay than the stacked buttons found on devices like the Zire 72 or the T|T3.

Technically, the game is a stunner. Actual NASA JPL-Caltech imagery is used to great effect as an animated backdrop to the main menu. The levels all have nearly identical rock formations but they do vary in color & layout. Theres some nice parallax scrolling going on in the backgrounds of each level as well. Sound effects are minimal but better than the bleeps & bloops of earlier Palm games. Again, the sadly underutilized aboveground sequences have some nice NASA-provided Nebulae & starfield backdrops.

The players ship itself is nicely animated and looks like something from a Flash Gordon serial. Moon Fighter only supports 320*320 devices and would seem to be a perfect fit for high-res Treos. I was extremely disappointed to see no 320*480 mode offered for HVGA Palm devices. The extra screen height would be greatly appreciated and allow for more complex levels. Of course, I am sure budgetary and/or technical considerations prevented its implementation.

The program launched speedily and ran off of my SD card with no issues whatsoever. You can always count on Astraware to release solid, stable programs even at version 1.00. They usually get around to providing updates for small bugs & new devices too. Kudos for that! 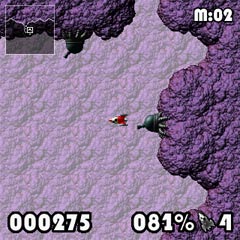 Overall Moon Fighter is a very polished and professional piece of work thats certainly worth its at a $10 pricetag. (Please note that I paid $9.95 for my version of the game on sale and that price vs. the current $19.95 price does favor heavily in my final judgment.) I personally would not pay more than $10 for this title due to two factors: its overall lack of depth and the unsuitability of most Palm devices buttons for fast action games like this one (no fault of Astraware or Pazzazz Games).

Astraware should be commended for having two of the top titles on the VERY short list of quality Palm shooters (Zap 2016 is the other one) and it makes a very refreshing break from their usual day-glo puzzle games. HVGA support, a multiplayer wireless mode (either co-op or competitive) and more mission-based level aboveground would make for a superb sequel.

Thanks for the review Hkklife.

I too bought this game without hesitation back when it was first released.

I don't find the key layout on the T3 to be much of an issue (unlike with several racing games that are practically impossible to play with the clustered button arrangement on the T3).

I too would like to see some added features in a sequel...

HVGA support is a nice-to-have, but there are some games I'm prepared to leave my T3 slider closed for!

Some gamers might be put off at first by this game - as it is a peculiar art controlling a tiny ship that can only rotate and thrust to navigate tight chambers whilst battling enemies and gravity.

But be patient - this kind of game is really rewarding once you get the hang of the controls.

All those who can remember Gravitar will vouch that asteroids is shallow child's play compared to the challanges presented with this game.

(Only now I'm old enough to have responsibilities... like a mortgage, a wife, two black cats that regard me as their 'Dad' and an ice-cold beer-fridge in the garage that needs to be kept stocked!)

Thanks for the update. I no longer have access to a Zodiac to test games on so I am just limited to my Palm TX & a Zire 72 as test platforms.

I'm surprirsed Astraware doesn't make this more explicitly clear on their website--they might garner some extra registration $ from Zod gamers wanting something new!