Ten years ago, Palm, captured the imagination of road warriors everywhere with the first Pilot connected organizer, a mighty 5.7-ounce combination of calendar, contacts, to-do lists and notes. Today, having shipped more than 34 million mobile-computing products, the company continues to improve the lives of people and businesses the world over, staying true to one guiding vision: The future of personal computing is mobile computing.

The original Pilot organizer, which sold for $299, owed its success largely to two breakthrough features: Its ability to synchronize easily with a computer and its unprecedented ease of use -- something often called the Palm experience. As time went on, Palm stayed true to its design philosophy while continuing to innovate, adding numerous new functions such as email and wireless and multimedia capabilities, from images to music. Today's top-of-the-line product is the Treo smartphone, which combines the best of a handheld computer with a great phone and email experience on some of the world's largest carrier networks.

Over the past decade, Palm products have collected data in space, survived a Mount Everest climb, closed million-dollar deals, entertained young and old, and won the hearts of customers around the globe. From doctors and real estate agents to students, celebrities and CEOs, people have grown to rely on Palm products in work and play.

Multimedia components -- including audio, photos, and a Palm timeline -- are available at www.palm.com/anniversary. The audio component includes reflections from Palm's founders, industry analysts, and long-time Palm employees. You can also check out PalmInfocenter's Pilot 1000 Retrospective.

"The first Pilot organizer was such a runaway success, even we were a bit surprised," said Ed Colligan, Palm president and chief executive officer. "But in one of my first conversations with Jeff Hawkins he convinced me that the future of personal computing -- REAL personal computing -- was going to be in these highly mobile devices. That's why he designed the Pilot. And that vision still holds today. The Pilot and its many Palm successors have become an extension of millions of people's lives -- keeping them connected to their work and home, letting them do email and browse the web on the go, allowing them to keep all their favorite files, music, photos and videos with them. I'm enormously proud of what we've accomplished, and I'm even more excited about what's yet to come." 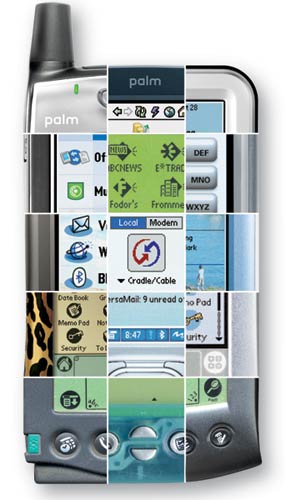 Palm has many important constituencies to thank for its success, including:
Customers, who have bought more than 34 million Palm devices over the years, including 3 million smartphones. Among these are individual consumers who stay organized and in touch with important information. For many of them, the Palm V handheld -- with sleek style as well as productivity capabilities -- was the first Palm product to charm gadget fans and trendsetters, marking a tipping point for mainstream market adoption. Other customers hail from business and service settings, such as doctors who use decision-support software to improve patient care at the point of care, at the patient's side.

Developers, who support Palm products with innovative consumer and enterprise software applications that today number more than 29,000 for the Palm OS(R) platform alone, plus hardware peripherals such as keyboards, GPS devices and barcode readers. When Palm expanded its platform choices for smartphones to include the Windows Mobile(R) platform, its developer community grew again.

Retail partners, distributors and resellers, who have sold Palm handheld computers and Treo smartphones the world over. Palm still works with many of the original retailers it began working with in 1996, including Circuit City, CompUSA, J&R, Fry's and Staples. Palm also has a 10-year history with distributors Ingram and Tech Data, as well as resellers, such as CDW, PC Connection and PC Mall.

Carrier partners, representing the largest mobile operators and distributors around the world.

Employees, who have worked passionately to deliver on the company's vision that the future of personal computing is mobile computing.

All of these constituencies have inspired the company and helped it determine its product roadmap.

Today, while Palm continues to offer a wide range of mobile-computing products, from simple and inviting $99 organizers to powerful mobile computers with wireless capabilities, it is focusing its investment in smartphones. These powerful phones let customers check email, access personal information such as contacts and calendar, listen to music and take and share photos, plus, with additional software, watch live television, listen to podcasts or post to personal blogs.

Palm also has attracted a growing number of enterprise users. More than 8,000 organizations have standardized on the Treo smartphone using GoodLink from Good Technology for email. Currently, 40 percent of the Fortune 1000 companies use Treo smartphones, and an additional 35 percent are in testing or trials. Frost & Sullivan recently found that mobile professionals are choosing Treo smartphones over competitive offerings for its abundant business-ready applications, high degree of flexibility, choice of operating systems, and power and convenience.

Palm sold 1 million Pilot organizers in the product's first 18 months an adoption rate faster than the IBM PC, Macintosh and even the microwave oven.

The original Pilot was the first mobile device that worked as a companion to a PC, so customers could synchronize their information and take it with them.

The first Pilot was built on a processor similar to those used by standard traffic lights and was powered by two AAA batteries (which lasted three months).

>>Something often called the Palm experience. As time went on, Palm stayed true to its design philosophy while continuing to innovate, adding numerous new functions

I am a power user and ardent fan of the Palm OS, but I think that the "Palm experience" was lost long ago.

It started with the Tungsten T, that had a completely useless, slider mechanism that doubtless had "WOW" effect and increased sales at the retailer, but it did so at the expense of usability.

Next nail in the coffin was Graffiti 2. Improvement My A$$. Palm didn't want to pay royalties to Xerox. Period. Otherwise they would have made graffiti 2 characters an extension of the existing graffiti, or allowed the user to toggle. Unless you're a hacker and know how to downgrade your graffiti (like I have) you're stuck having to do maddening things like wait a moment after finishing a word ending in "L" so before you draw a space so that your "L" doesn't become a "T". Im still stunned at the disregard for their installed base. G2 is not better. Its worse by far, albeit royalty free.

On to the Tungsten T3! Why can't I adjust the screen brightness by holding down the power button like before? why is it no longer an option to adjust it with a pen stroke. NOW it's VERY COUNTERINTUITIVELY underneath the CLOCK in the taskbar. You can't even find it in the "Preferences" applet where EVERYTHING is controlled. What sense does that make??

On to the Palm Desktop and HotSync. TWICE NOW, I've lost EVERYTING in my palm (had to resort to days-old tape backup) because during an initial HotSync, the software ignored my command, for "DESKTOP OVERWRITES HANDHELD" instead assuming that I wanted the NEWER VERSION OF "EMPTY PALM" instead of OLD VERSION OF EVERYTHING. (This is reproducible by the way). What kind of PIM doesn't protect its user's data first and foremost?? What kind of company would be so out of touch that they could allow this to happen? I had a backup. Do you? Does your dear mother?

I believe palm is quickly losing what makes them valuable. I have only a very faint glimmer of hope that they'll resurrect the spirit of palm it in their new Linux based OS. But my fear is that it will remain as vaporware until dies just like Cobalt.

Wow. It sure has aged gracefully. Doesn't look a day over 1 year old. It is like the Dick Clark of operating systems. Looks the same yesterday, today and tomorrow.

Well, Mr Hansberry, for a WM cheerleader, you certainly seem to have a lot to say about Palm, such as to following dross:

Why the obsession with a tiny little company like Palm, I wonder? After all, they are doomed to extinction (as you have been predicting for 5 or 6 years now).

Wouldn't it be funny if it happened that your masters at Redmond needed the support of this pathetic little company (as you call them)?

Oh wait, wasn't that Mr Gates himself at that press conference with the Palm and Verizon reps a few weeks ago? And with HP (the biggest WinCE licensee/victim) indicating that it's losing interest in handheld computers, could it be that the mighty M$ might needs the support of that hapless bunch of losers (as you call them) over at Palm?

I have been and continue to predict the extinction of PalmOS. Over 80% share in 2000, and what, down around 30% now? Trending like a ski slope.

I have never slammed the hardware side of the company in general. Maybe a particular device (the Lifedrive is laughable) but I think at one time or another, I have slammed just about every Windows Mobile OEM for a boneheaded device release.

But no, Redmond doesn't need Palm, Inc, but I am sure they are making a great OEM partner, and the 700w is a killer device. I would seriously consider getting one if there was a GSM version and I didn't already have another killer device, the K-Jam.

Many of the reviewers thought it did not compare favourably against the old 650. Amazing that an 18 month old unit, which runs a hopelessly deficient and obsolette operating system (as you call it) can compare so well against your 'killer device'.