Konami, a developer of some of the most storied franchises in console and arcade gaming history, has finally released an official port of one of their titles for Palm OS devices. Frogger, the classic arcade hit from 1981 is now available for Palm OS-based Treos.

The games simple but addictive gameplay consists of a screen filled with a highway on the lower half and a river at the upper half. The player must guide Frogger past the speeding vehicles roadway prior to crossing treacherous river obstacles such as crocodiles and logs to safely reach the other side. 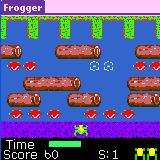 Frogger has enjoyed decades of popularity as one of the most popular and most often ported games of all time. It also holds the dubious distinction of being the final titles officially released for both the Sega Genesis and Super Nintendo consoles in 1998. In its original arcade incarnation, Frogger was developed by Konami and published by Sega. Frogger enjoyed something of a modern renaissance in 1997 when several superb 3D remakes of the game were released for the Windows 95 PCs and Sonys new Playstation. Its new Palm OS remake, the title is developed by Konami Digital Entertainment and published by Handmark.

The Palm OS version of Frogger requires 770k of available RAM. A trial download is unfortunately not available for download. The game's current version is 1.0.6. Konamis mobile game page does not even mention the existence of a Palm OS port of the title, though it is currently being heavily promoted by Handmark and Handango.

This title unfortunately looks to be intentionally limited to Palm OS Treos only. A supported device on Handango's page for the game lists only the Treo 600, 650, 680, 700p, and 755p with no mention of support for any Palm OS handheld. Handmarks page does have a headline reading Frogger for Treo Smartphones and Palm Handhelds but does not give a full device compatibility list. Assuming the above supported device list is correct, the game theoretically supports both 160x160 and 320x320 screen resolutions. There is no mention of 480x320 screen support even though the original arcade's vertically-oriented gameplay would ideally support this.

A full overview of the game along with some screenshots showcasing the fairly accurate graphics can be found at Handmarks Frogger page. Thee full registered version of Frogger can be purchased for $14.99.

It would have played so well on the Zodiac. There's $15 I wouldn't be giving them.

Be still my beating heart! I can really buy a 25-year old game for $15? Wow, PalmOS is a hotbed of software innovation.

I'm still waiting for someone to make Omega Race for Palm. I do have it using the Frodo Commodore 64 emultor but a native version would be nicer. In case you've forgotten or are too young -> http://tinyurl.com/3x2nc6
Yes it's a simple game but my favorite from my youth. Always has amazed me that no one has tried to make it for the PalmOS unless I've just missed it all of these years.

there are so many game emulators... really, there are at least 10 different emulators for sega, nintendo, dos games, gameboy.... and all of them free! why would anyone pay so much for one game?
i play 3000 games for free on my LJP emulator alone... not to mention PalmMame and the great ScummVM!!

Technically, all of those ROMs you own are likely illegal unless you own the original disk/cassette/cartridge containing that same ROM code.

While I agree that the game is atrociously overpriced, I am quite fond of the classic game bundles that often appear on the PC and various home consoles. I like not only owning the games legitimately but also having them on a single disc and launched from a unified launcher etc.

Works on TX and T3

Could not resist buying it. Have fond memories of playing Frogger on
a Commodore 64 in the eighties.
Works as advertised on my Treo 680. Also tried it on TX and T3.
It works on TX, but not on the T3 (see below).
As suspected it only supports 320x320, no 480x320.
There are issues with the fiveway due to the different keycodes
generated on the T3, TX and Treos.
Basically you sometimes get double keys on TX.
On the T3 only up/down works, not left/right on the fiveway
making it impossible to play a good game (unless somebody
hacks the fiveway code).