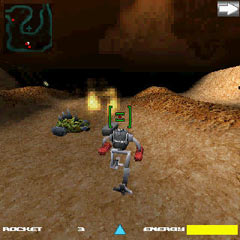 Cybersaurus is a thrilling new action game from Darxun Games for Palm OS 5.2 and later devices. The games storyline is a hodgepodge of elements inspired by Beast Wars-era Transformers and the BattleTech/MechWarrior universe. The games tired storyline consists of your Raptor 9000 mech being the Earths only hope against a race of evil Robosaurs. The mechanized Robosaurs civilization used Earth's original Dinosaurs as inspiration for their sleek, metallic instruments of destruction. Now in the year 2513 they have returned to reclaim the planet for themselves. Of course, the primary role here is action-packed gameplay so any storyline shortcomings can be forgiven.

Gameplay
Three levels of difficulty are available in this single player only battle fest. I performed game testing on normal mode. The main in-game choice is choosing between a 1st person cockpit view or a 3rd person over-the-shoulder view. In 1st person mode, I found it far easier to aim my weapons precisely but the claustrophobic cockpit view limits ones view of nearby enemy movement. In addition to a better view of the action, overall maneuverability was also easier in 3rd person mode.

Three different weapons are available to your Raptor 900: machine gun, plasma rifle and rocket launcher (not available at the start of the game). The machine gun was my mainstay weapon due to its speed and high ammo count. The plasma rifle is best saved for tougher enemies in later stages. Rockets are few and far between and should be used very sparingly.

In both perspective modes an onscreen radar map provides the location of the enemy Robosaurs, weapon & energy power-ups and the exit to the next stage. In a very surprising twist (on level 2 in fact!) I found myself in the heat of battle and running away from an enemy. I suddenly encountered the loading screen and ended up back on stage 1. The game actually utilizes a hub-like system similar to some PC or console games. I was able to go back to stage 1 and pick up an energy refill that I had previously missed and then return to the action in stage 2. That was a very cool and unexpected touch that adds some additional depth and replayability to the game. 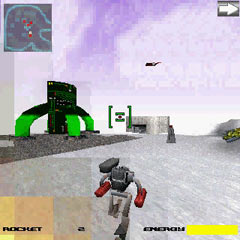 During the game certain tasks (collecting keys to unlock barrier gates etc) will have to be met in order to proceed. These adventure elements may appear a bit tacked on but nevertheless provided a nice counterpart to the constant search and destroy combat.

Enemy AI was not brilliant but the enemy Saurs can take a lot of your firepower before succumbing. Things really start to get hairy in later levels, no matter the difficulty level.

Graphics & Sound
Whether in 1st or 3rd person mode, the graphics & animation in Cybersaurus are spectacular. Reminiscent of a first-generation Playstation title, the texture-mapped landscape scrolls smoothly and is quite an impressive feat for a Palm OS device. Different "planets" have different sky & terrain coloring & textures for a nice variety of landscapes.

Finally, a developer that supports HVGA on non-Zodiac devices! I was overjoyed to be able to play this on my Palm TX. Slightly aggravatingly, no provision exists when playing in 320 x 320 mode on HVGA Palm devices to minimize or darken the Graffiti area during gameplay. 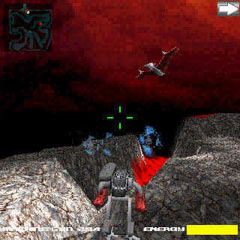 My particularly favorite effect was the animated legs of the Raptor 9000 running across the landscape. Another nice touch was a rotating camera view that spins around your exploding mech when defeated by an enemy.

The exterior camera view did seem a bit choppy in 480 x 320 when a lot of action was occurring simultaneously. This is attributed of course to the additional strain on the Palms hardware due to a larger viewing area & more background graphics being drawn and processed. Nevertheless, overall performance was very good on both 312mhz Palm devices I tested the game on.

Sound effects are sparse but effective. The in-game weapon firing noises are appropriate and the enemy Robosaurs emit an eerie roar that sounds like something right out of the Jurassic Park films. The Raptor 9000s thudding footsteps are a nice touch as are the whistling winds of the alien moons/planets on which the game takes place. Cybersaurus title screen features a nice hard rockin title song and an attractively rendered shot of your mech.

Controls/Misc
The controls are fully remappable and posed no problems whatsoever on my TX or 700p. I found the game responded immediately to button presses and its control scheme is very appropriate for a Palm OS handheld device. My only complaint is that pressing the menu button did not always bring up the game exit option. Id have liked some sort of in-game menu where options can be toggled on and off and games could be saved and loaded. An option to 'flip' the screen over the X axis would also be very useful for gamers who want to play in landscape mode with the 5-way Navigator on the left side instead of the right.

The main PRC file is ~2.8mb and can be stored on an SD card. The games 105kb PDB file must reside in main memory for most newer Palm OS devices. Additionally, when playing in 480 x 320 mode on a T3/T5/LD/TX, you must rotate your Palms screen to landscape mode prior to launching the game--there are no means to do this from within the game. Again, Cybersaurus requires an OS 5.2 or newer Palm OS device with a 200mhz or faster CPU. So T|T, T2, Zire 71, T|E and Zire 31 owners are unfortunately out of luck. 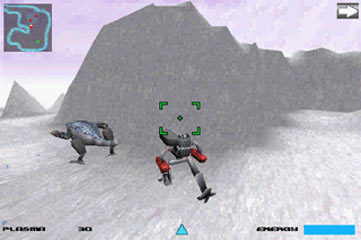 While Cybersaurus is still a bit rough around the edges in this initial version, its easily worth the price of registration. Id like to see a bit of polishing to the menus and overall presentation of the game as well as the ability to flip the screen in landscape mode. Multiplayer would be nice down the road but the game provides plenty of challenge in single player mode.

Ultimately, these minor quibbles do not detract from the fact that Cybersaurus is not just one of the years best Palm OS game, but one of the best Palm OS action titles ever! Its impressive graphics and exciting in-game action make Darxun Games a developer to watch. Ill probably end up checking out their earlier titles simply from spending some time playing this game. Any Palm gamer who just happens to like action and battling mecha certainly needs to look no further!

Awesome! It's a Mech game. I'm a Pentium 1 generation kid I suppose. This is what we did for PC gaming. Mech Warrior 2, oh the fun :-)

It's ironic how Cobalt was killed because of backward compatibility issues and yet new software is coming out OS 5.2 or better now. This is the third piece of software in a week my Tungsten T has been unable to run.

I think it's actually more a matter of CPU speed than anything. That's likely the main reason that a handful of otherwise capable but sub-200mhz Tungstens & Zires have trouble with this game.

As I posted last week, I've never seen anything in computing where within the same version of an OS (OS 5.0 to OS 5.4.9) so many apps have been broken and/or crippled.

Between the apathy of the POS software developers and Palm's continued hacking/tweaking/breaking of the OS, compatability with anything not updated in the past 18 months is becoming a very uncertain thing indeed.

Perhaps Palm is quietly acknowledging this on the basis of data claiming that "Treo users only install X handful of 3-rd party applications on their devices" and Palm's increasingly generous out-of-the-box software bundles.

hkklife said, "As I posted last week, I've never seen anything in computing where within the same version of an OS (OS 5.0 to OS 5.4.9) so many apps have been broken and/or crippled."

From my experience, applications break within releases of 5.x because the programmer wasn't using the Palm OS API properly in the first place. It appears that previous versions of the Palm OS handled or ignored improper calls when it could in the production ROMs to avoid crashes.

I personally noticed problems in my applications when devices with non-volatile memory were introduced (Tungsten E2, LifeDrive, Treo 650). The DmQueryRecord API call views records in the storage memory. However, a rogue DmQueryRecord call in my code was updating those records instead of using DmGetRecord. Previous versions of the Palm OS forgave my sin. The non-volatile versions punished me out of necessity until I discovered it and fixed it. :)

From my experience, applications break within releases of 5.x because the programmer wasn't using the Palm OS API properly in the first place. It appears that previous versions of the Palm OS handled or ignored improper calls when it could in the production ROMs to avoid crashes.

No, Voice, the true victims are "we the suckers" (the customers--remember Mike Cane's editioral from a while back?) who keep forking over $ for apps/games that keep on getting broken.

Not to mention all the $ handed to Palm for buggy hardware that pulls the rug out from under a handful of apps every time a minor OS "upgrade" occurs.

And not with Palm's wacky button reassigning on NVFS devices, certain games that still RUN are nigh unusable unless they have all buttons remappable. Some fairly modern (updated/released within the passt 12 months) entertainment titles still have major issues with the home button introduced on the LD, TX & 700P.

The T3, despite its very shaky hardware, OS-wise, is still the most robust Palm product of recent vintage.

Readers: Here are the guidelines that TVoR used to reply to my post.

1. Don't confirm other people's assertions for yourself. That takes time away from writing dribble.

2. Use lots and lots of boldface. Arguments appear much stronger in boldface.

3. Overreact. Imply that operating system manufacturers are never at fault.

4. Important: Write post after post about a handheld operating system that you believe is dead. Keep writing about how dead it is for months and months after you convinced yourself that it's dead.

The only true victims are the readers of this forum that have to wade through TVoR's posts. Long term brain damage, that...

relyons, I love you too. Have a nice day, Sweetie.

P.S. While my post used boldface, you on the other hand are a BOLDFACED LI*R.

TVoR said, "P.S. While my post used boldface, you on the other hand are a BOLDFACED LI*R."

No boldface was necessary...

No boldface was necessary...

Please keep up with the BOLDFACED LI*S.

TVoR
(Undefeated, and still the champion)

anyone tried this game on their treo yet?

I think this game looks for devices with a fast CPU primarily with a large helping of DBCache of secondary importance.