SlingMedia is now accepting public beta tester applications for the Palm OS client of the Slingplayer mobile. Interested users may fill out the application here. Applicants are required to own any model of the Slingbox hardware as well as the only 3g-enabled Palm OS Treo, the 700p. An unlimited data plan is also a mandatory requirement, obviously. The Treo 680, 650, and Palm TX (no mention of the LifeDrive) are also listed as acceptable secondary products for testing.

Being one of the most eagerly anticipated Palm software products in recent memory, Sling Media's Palm OS SlingPlayer is certain to be a popular product amongst its beta testers during the four week test period. Sling Media's website has also been updated and now lists "Palm OS" amongst its supported portable platforms. 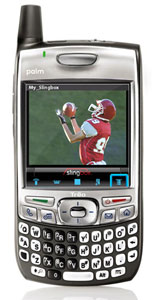 SlingPlayer Mobile gives consumers their entire home TV experience. Anything that they can watch on their sofas back home, they can now watch via a Treo smartphone. In addition, SlingPlayer Mobile customers can control a home digital video recorder (DVR), such as a TiVo, to record shows, watch shows that have been previously recorded, and even pause and rewind live TV.

The mobile TV experience for Palm OS is powered by the award-winning Slingbox, a breakthrough consumer electronics product that enables consumers to watch their living room TV programming from wherever they are by turning virtually any Internet-connected Windows-based laptop or desktop into a personal TV. The Slingbox redirects, or "placeshifts," a single live TV stream from a cable box, satellite receiver or DVR to the viewer's PC -- located anywhere in the home or anywhere in the world, via the Internet.

Over wifi on the TX could be nice!

Did anyone here get in on this beta?

Did anyone here get in on this beta? Is there an NDA involved? if not what are your thoughts so far?