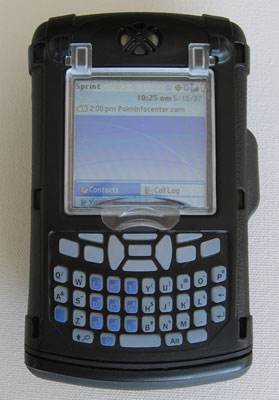 Ive known about the Otterbox line of cases for several years now but never really gave them a second thought as something Id carry for daily usage. Concurrent with the launch of the 755p, Ryan sent me a review unit of the latest Otterbox 1921 case by Otter Products. This is an improved version of the previous 1920 case and is designed to fit the latest generation of thinner, antenna-less Treos such as the 680, 750 and 755p. Ive spent a week trying to live with the 1921 and a Sprint Treo 755p.

The Otterbox 1921 will be available sometime in early June from Otter Products. It was announced alongside the Treo 755p release on Sprint. The MSRP of the Otterbox 1921 is $129.95. The Otterbox 1920 is the previous Otterbox Treo case and is compatible with the Treo 650 and 700 series.

Packaging
The Otterbox case arrived at my door, forwarded to me by way of Ryan. It came clad in simple generic cardboard packaging, appropriate since it was a review sample. I did appreciate Otter including two printed pages in color showing the step-by-step process of inserting and removing the Treo. Thankfully I was having a pretty good day mentally and I was able to open the Otterbox and install the 755p without having to consult the documentation.

In addition to the actual case, one of Otters optional belt clip attachments was included in the box. This item is an additional accessory purchased separately for $19.95rather pricey for a belt clip but at least they offer the option. Since I dont masquerade as a caped crusader by night, Im not a fan of clips hanging off of my utility belt and would likely forego this accessory.

Overall, no frills in the packaging and presentation department but none are really necessary for this sort of thing either. So I cannot comment on what might be in store for actual purchasers of the Otterbox case since my review sample may or may not be representative of the final product which wont be available for sale until next month.

Exterior Design & Construction
Anyone who has had any pat experience with Otters line of ruggedized cases, housings, and enclosures will be immediately at home with this product. I think it goes without saying that no corners were cut during the design or production of this case. The plastics are of an exceedingly high quality, and while not exactly soft-touch, have a nice tactile feel. The 1921 is full of little channels and grooves interspaced throughout the two halves of the case. This makes for a very secure grip. The rubberized paint of the 755p feels like a greased banana in comparison to this chunk o rubber and plastic!

Theres also a stylus holder on the right-hand side of the case. The 755ps wobbly little plastic stylus fits perfectly in the slot but tends to get caught on clothing when its mounted externally. My advice is to buy a pack of spares because youre bound to lose a few styli when they are mounted externally like this. Otter did what they could out of necessity, as designing the case to permit quick stylus insertion and removal would have entailed too many compromises in protection. 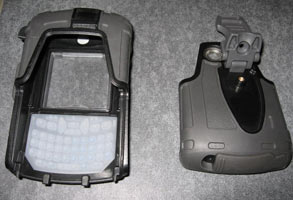 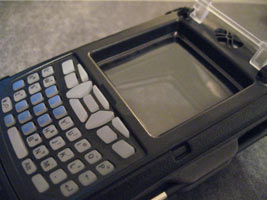 My greatest surprise was at the overall light weight of the case, despite its superior build quality. The front panel is dominated by the keyboard and a clear polycarbonate window over the Treos LCD. While weve seen plenty of Palm cases with integrated flip screen protectors before here and here) none come close to the rigidity or strength of the Otterboxs cover. It offers fantastic screen protection but unfortunately there is some edge distortion at the covers corners unless you are looking directly onto the LCD. Also, the tab used to flip the screen up is rather large and obscures the lower center portion of the Treos screen. Since Treo screens arent getting any larger and my eyes arent getting any younger, this makes for a bad combination. I wouldnt want to be doing any heavy e-book reading or game playing with this cover over my screen. Fortunately, it can be easily flipped up and out of the way.

More good news came in the form of the "fit" of the case in my hand. Ive spent some time in warehouse environments and on jobsites and I can say that there is always something that can pose a threat to life, limb, or gadget in these environments. The Otterbox case oozes security and solidity whether being held in the hand or carried on a belt.

Since I frequently take my Treo out of its case for any number of tasks such as device resetting, rapid typing, or Hotsync cradle docking this is an important consideration for me. An Otterbox case is decidedly not designed for frequent removal and reinsertion but this just due to its secure construction. Unlike some rigid or neoprene-lined Palm cases, frequent insertion and removal is not going to wear out or stretch anything on the Otterbox.

Unfortunately, one-handed d-pad or stylus-based touchscreen usage is vastly easier on this device than anything involving typing. Due to the cases inherent design requirements, typing becomes, at best, a huge chore. At worst, its nearly impossible for fat-fingered thumboard typists such as yours truly to peck out anything more than a brief e-mail or SMS with this keyboard-on-a-keyboard. None of the non-alphanumeric exterior buttons are labeled or colored in any way. Its also impossible to discern the print on the Treos actual buttons through the Otterbox keys. I could foresee someone who just switched from a Treo 600 or 650 having an especially hard time memorizing which button does what. This was unfortunately not the last disappointment I encountered after living with the case for just a few hours in daily usage.

The little rubber grooves and channels on all sides of the case make for a fantastic worry-free grip. Even on a hot summer day, the chances of your expensive Treo becoming a greasy projectile after coming into contact with sweaty hands is practically nonexistent. I did find the case easier and more comfortable to handle when wielding it in PDA mode than when holding it up to my ear for phone usage. Switching to speakerphone mode didnt help either, since the same design that makes the Otterbox dust-proof also prevents much sound from entering or escaping (see the testing section below for more information on volume issues). 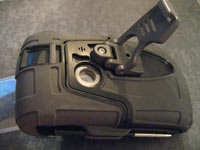 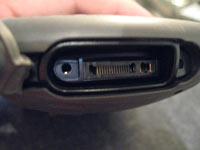 Testing Methodology
Not wishing to risk the brand spankin new Treo 755p Im currently reviewing, I did the next best thing to test out the OttterboxI tested it while there was no Treo inside! I taped a few pieces of regular white filter paper to the inside of the case, making sure to cover the sides and bottom of the 1921. I figured that the crisp white filter paper would show any specks or debris that might enter the case during testing.

I then proceeded to dunk the case in a bag of sand and dumped out a few handfuls from a 50 lb bag of dog food. For good measure I squirted some Hunts ketchup onto the case while it was sitting face down on my kitchen countertop. Im glad to say that the box survived everything nearly unscathed. A few grains of sand and dog kibble dust got stuck in the various crevices of the case but nothing that a bit of time and a cotton swab could not cure. Color me impressed (but dont color the interior of the 1921 ketchup red)!

After taking a few sample photos, I was pleased to see that other than some extra smudginess, the porthole on the rear section didnt diminish the 755ps camera much at all. Ive always wanted a weatherproof housing for my digital camera but I change cameras too frequently to justify the purchase of a weatherproof housing. An Otterbox might prove to be just good enough of a solution to enable some kind of worry-free casual outdfoor photography via the Treos camera.

I did find that opening the bottom flap of the cases made for tolerable speakerphone conversations in a quiet environment. I also received a few complaints from friends and colleagues accusing me of mumbling when I was talking to them through the case. Opening the bottom flap and letting it dangle freely mitigated this issue somewhat. But overall, anything more than a brief, informal call, (either on speakerphone or conducted through the case) necessitated taking the 755p out of the Otterbox and using it naked. I also found Phone Technician (or VolumeCare) to be a crucial addition to the Treos list of installed programs. It took the extra oomph of volume boost afforded by Phone Technician to penetrate the thick gasket separating my ear from the Treos speaker.

Interior Quality
Opening up the rear locking mechanism reveals the interior of the case. I was surprised to not find a neoprene lining anywhere within the case. This goes in direct contrast to most other rugged PDA and smartphones cases Ive used in the past (especially the aluminum ones). I gave the cases buttons a test by pressing them from the inside and seeing if their rubber seals creaked buckled, or were otherwise in any danger of coming loose. Everything was rock solid.

The material that constitutes the 1921s keyboard is considerably squishier on the inside than it is on the outside. I was a bit worried that the cases keys might be overly harsh on the Treos keyboard but I was relieved to see that this was not at all an issue to worry about. The dimmer keyboard lighting of the 755p was further diminished by having to pass through another layer of keys. Of course this is more of a beef with Palms cost-cutting on the 755p rather than an inherent design flaw with the Otterbox. 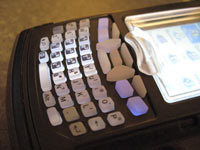 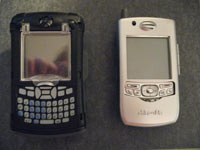 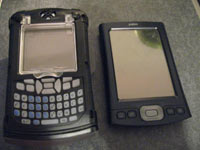 Conclusion
Lets face it; this is a highly specialized case that is certain to find a home only for certain types of users. I can imagine avid sportsmen or outdoorsy types being the target audience for this sort of case in addition, of course, to industrial users and vertical market applications.

When I began this review, I had no expectations that this monster was going to grow on me or catch admiring stares from friends and colleagues. This case means business and is built to a high engineering standard with few compromises. I can handle middling aesthetics and added weight or bulk if the relative merits of a case are up to par. The Otterbox 1921 is certainly up to its advertised role and makes no bones about it.

I could definitely see a Treo in an Otterbox as a great single device solution for usage near sand or water. Itd be theoretically possible to snap a few photos, enjoy a few MP3s, and make some phone calls or check the weather without ever having to endanger the Treo. Im glad to see companies like Otter continuing to churn out unique, specialized, high-quality Treo accessories. Just because this isnt the sort of case Id ever buy or use on a daily basis doesnt mean I cannot appreciate the careful design and craftsmanship that has gone into the creation of this unique, truly one of a kind enclosure.

It's truly amazing that all rubber key functions really well. But the look is so hollywood style. And it's too bulky.