A photographer caught pictures of a Sony TV Tuner memory stick accessory being shown at CeBit. Late last year, Sony Japan announced that it has developed some of the smallest TV tuner chips designed for PDAs and other mobile devices. When integrated with a mobile device the user would be able to receive and view live broadcast television. 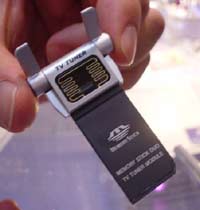 The chips announced last year, are the main components that would enable TV reception on mobile devices. Both chips can receive a common radio signal input for VHF (1-12 channel) and UHF (13-62 channel), with an impressive signal/noise ratio of 47 dB. The 401 model achieves this with a low 0.8w power consumption.

The chip  BTF-ZJ401 has just a 1.5 ml volume (25x20x3mm, 3.5g), which is roughly 1/25th the size of other chips on the market today. The main problem for designers of such a small radio units is that it usually contains many induction coils; size of those cannot be reduced endlessly. Sony developed a special chip transforming the radio signal in order to replace all the external coils. Both tuners have a digital interface for simple integration into other digital devices as PDA, laptops and tablet PCs.

A Sony spokesperson stated that the TV Tuner card shown at CeBit was a product concept mock up. As of now, Sony has no plans to commercialize the device.

Thanks to ClieSource for the tip. The picture is from Job Genders CeBit Gallery.

"the TV Tuner card shown at CeBit was a product concept mock up. As of now, Sony has no plans to commercialize the device."

Sony was showing mock ups like this 3 years ago and essentially none of them have seen the light of day as a real product.

Yep. Not wanting to sound like a broken record here, but Sony's "non-marketing" of cool MS peripherals is becoming just a little cynical. Year after year they show neat stuff at these shows, but it's always an empty implied promise solely done to generate buzz for their platform and proprietary expansion format.

And I'll admit that I bit, too. I bought a T615 on the expectation that the GPS and Bluetooth MemorySticks would see the light of day in the U.S. Wrong.

MobileMitch @ 3/18/2003 6:26:32 PM #
This is ALMOST as cool as that Handspring Spatula/Springboard unit they showed as concept but never marketed.

What exactly is the news then?

Admin @ 3/18/2003 2:43:59 PM #
Indeed Sony stated that they have no plans to commercialize the device, yet they have already developed/manufactured the chips to make something like this possible. So they are mum on it now, but this is technology that you can expect to see in the not so distant future.

We've seen what happened there.

And both the Bluetooth and GPS Memstick devices have seen the light of day (granted, very limited light, but still).

So who's to say that this one won't follow a similar route?

Anyone wants to guess how this will be?

RE: Anyone wants to guess how this will be?

I know that my open air reception even with basic rabbit ear's isn't that great. So the question is, how would you be able to connect an external reception source such as roof mount antena, cable or satellite?

crabini @ 3/19/2003 5:55:57 PM #
Any wireless medium (bluetooth,802's) can accomplish by extending or expanding the capabilities of this device, such as satellite, digital cable box, security cameras the list goes on the uses of this device can open up.

Since Bluetooth is only capable for short range operation, why in the world would you want to watch cable/satellite/digital tv on your PDA when you have a huge screen (compared to the PDA) tv in the same room?

"Because it's cool" isn't a valid answer. I'm a geek too but that is just plain stupid. ;-)

Wiggd @ 3/22/2003 8:36:14 AM #
Ok, follow on question to the blue tooth solution. If I have the TV tuner in the memory slot to watch tv. How am suppose to insert a blue tooth adapter extension device in to my pda when their is only one memory slot, so that iI can get better reception to watch TV in the first place?

Just something to get the mental juices going.

edi @ 9/25/2003 1:42:50 PM #
Why are you comparing a possible TV enabled palm device with a full TV set? The real question which answers your first one is: "Are you planning to take the TV set with you wherever you go?"

But Id much rather have it ebedded within a pda.

Have they even realised how much business they're losing ? when they hold out on us?????????