The SD Card Association announced plans to finalize specifications for a new, super-compact memory card this Spring during the CTIA wireless show. The microSD card, expected to be the world's smallest memory card and measuring just 11mm x 15mm x 1mm, will be completely compatible with SanDisk's TransFlash format

SanDisk TransFlash has been widely adopted by key handset manufacturers around the world. The microSD card is supported by the more than 800 members of the SD Association and can be used immediately in the millions of handsets that currently use TransFlash. SanDisk plans to transition its TransFlash line to the microSD standard in Q3 2005. 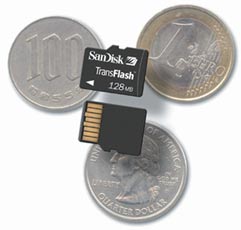 Not yet another memory card format! Enuff said......

Just what the doctor (Kevorkian) ordered. About the time your devices get settled on all using SD ... well you know the story.

Partial good news is that the SD adapter is in mind. At least backward compatible. It was just a matter of time before it had to come. Were this not to happen, we would be trying to cram PCMCIA cards into our flip fones. :-(

I know but isn't SD small enough? I heard transflash shouldn't be moved constantly from one place to another because of their size.

The format has already been around for a while as have the SD adaptors, so it's not like the SD card assosciation is actually introducing a new format, it's just co-opting an existing one, much as the Pre-N wireless routers are on sale before the 802.11n specification has been officially adopted.

My only point of confusion is that when these cards were introduced originally and how they are implimented in some phones is as a replacable main storage medium (like a hard disk) not a removable memory card. Oh well. As long as my phone has some sort of memory expansion, that's a good thing.

The Three Marketing Rules of High-Tech:

A totally ridiculous format. Imagine dropping one - the "contact lens" scenario. And bare cards will get lost in your pocket lint, unless you keep them in a wallet/holder, and then what's the point?

Regular SDIO - roughly coin size - is the smallest practical size for handling. Why not invest the R&D and marketing in a 100GB SDIO card instead?

(OTOH, this could be an early April Fools joke!)

First, sdio means there is something other than storage on the card. Second, I believe the physical limit of sd is something like 24 or 32 GB but that is years away and signifigantly higher storage capacities could only be achieved through some revolutionairy new compression tecniques.

I never really got into miniSD. It just didnt provide enough of a size advantage to make it worthwhile and a full sd slot that supports sdio is just so much more useful, but for really small form factor devices that need storage only, a transflash/microSD slot is a valuable addition.

Guys, settle down. Everything really works as promised based on my experience with the format.

I have had a Transflash-enabled cell phone for nearly a year now (Moto V710). I pull the card out probably 1x or 2x per week to load its crummy camera's pics onto my PC and I've never experienced any problems. If anything, the little rubber door protecting the slot on the phone is the thing that's goingto break. SD Adapter usage is seamless and pretty easy (assuming you have a thumbnail to get the TF/mini-SD card out of the SD caddy).

I keep the TF card in my Motorola phone the vast majority of the time and keep its SD reader sleeve card in the SD pocket of my T3 hardcase. I've even viewed my cellphone pics using SplashPhoto on my T3 via the adapter and beamed them to someone else.

My question is----why wasn't TF called micro-SD in the FIRST place? And is microSD merely a rebadging/relaunch marketing move for the TF format or are there other differences such as copy protection or encryption support?

Of course you'd lose this sucker if you handled it a lot. The same can be said for carrying a loose diamond or a gem around in your pocket as well. I think as long as it's kept in its intended device (phone etc) the majority of the time you'll be find. If you have a card 128mb or larger, unless you are planning on using your cell phone as an ipod replacement, you will have tons of space for storage ~1mp images, ringtones etc. I just hope that they keep the tradition of bundling the SD adapter card with EVERY TF/MicroSD card sold. That's a very nice extra as I could forsee needing extras of those.

I disagree. A removable media can be as small as you want. Where you remove it is the issue. You take a contact lens out during a bumpy subway ride, you deserve to loose it for being so stupid.