Could This Be the First Palm OS Cobalt Smartphone?

According to a new report, Singapore based Oswin Technology, which designs and produces a range of mobile wireless devices, has created what it says is the world's first smartphone compatible with five operating systems, including Palm OS Cobalt. 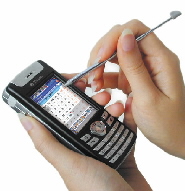 An article on Singapore's The Business Times talks about the new device which will first go on sale in the region as a Windows CE Smartphone. It goes on to reveal the company plans a third quarter release of a version running Palm OS 6, which is expected to be the world's first Cobalt device.

While not many details on the device are covered, the piece states that Oswin is a offshoot of Group Sense Technology, a unit of Group Sense Limited, which developed the Zircon line of Palm OS 4 based smartphones that were sold in Asia.

Related Articles...
More articles about Smartphones
Could This Be the First Palm OS Cobalt Smartphone? http://www.palminfocenter.com/news/7736/could-this-be-the-first-palm-os-cobalt-smartphone/

Not a looker is it?

I sure hope not...a monster brick with no keyboard. By the way, what's up with the world's longest stylus there as well?

Look at the screen and tell me that's Palm OS...

Because with the blue bar running along the top and the distinct sign of a cross in the top-right, I smell the putrid stench of a certain multicoloured pane-glass operating system....

It's definately a brick - the Qool QDA is a good example of what a Palm OS Smartphone should look like...

It aint a brick and the stylii isnt too long.
Its just asian people have small hands.

Well, looks great anyways. My Rotring 600 Multipen is always with me, and by the way, bigger device => bigger screen.
I hope they will sell it somewhere besides asia...

F U The_Voice_of_Reason. Every one tells me you suk big donky diks for a living.

Could you be any dumber?

"Does it frighten you?

Yea, I can see how a comment concerning a PDA stylus would make you go right to the homo-erotic card....are you for real man, or do you just have prison sex fantasies on the brain?

Because in case you didn't know, this here thing we call the internet if rife with places that will allow you to indulge that kind of thing. I know, I know...a PDA site seems like the right place, but email your father and ask him where he goes to do it.

At the end of the day a Cobalt Smartphone is a Cobalt Smartphone. With the arrival of the first, things can only get smaller and neater. The idea of an extensible stylus like the one used above is quite good as it helps with entering stuff in Graffitti. If the spring goes though...

Maybe that's the inspiration behind this article at Tapland...:http://www.tapland.com/news_arc/?id=628

Wow. And all this over the operating system on a cell phone not yet released 1/2 way around the world.

I'm beginning to question the maturity of the posters in PIC.

Anyway, the stylus looks like an elongated CLIE TJ/UX/TH stylus.

Must be a fake?

There are no fakes at PIC

You may wanna take a gander at the article date.

>I'm beginning to question the maturity of the posters in PIC.

Just now? It's been like this for a couple years. No one will throw out the trolls.

I hope the OS6 is a good smartphone OS as its not simple to port the PDA OS to Smartphone.....

Any ARM device is theoretically compatible with several OSs

Palm, PocketPC, Zaurus-Linux, Symbian, MS Smartphone, maybe more. They all run on ARM chips. It's just a matter of what OS the developers choose to customize, and whether the OS supports the features of the device. The real question is whether the promised OS support will ever materialize, and whether users will be able to reflash the device from one OS to another and back again.

Longest stylus in the world.

hahahahahaha the stylus does indeed look ridiculously long. Thanks for the good laugh. :)

Does the stylus have a telescoping effect a la an antenna or is that just a bad photo crop job?

Going way out on a limb here (insert that smilie indicating sarcasm), I'm assuming the person holding the phone and "longest stylus in the world" is an asian woman with relatively small hands (Singapore and long fingernails) and that the stylus in question is does "have a telescoping effect" (thicker toward the point, faint little line where it crosses the index finger, thinner toward the gray knob). So instead of pointing out how huge the stylus is, I'll complain about how small the screen is.

The stylus doubles as a phone antenna, hence the length.

Not sure if Gekko was making the same comment, or just using the antenna reference to explain 'telescoping'. Anyway, I'm happy to take the credit for the observation so the dumb 'asian hands' stuff stops.

In normal use the last thin part should probably be retracted, and the stylus would look normal.

When it's inserted back into the body of the phone, the metal casing makes contact with the phone internals, and the antenna part should then be extended the way many phone antennas do.

If you've ever had a replacement antenna you would recognize the various parts of the stylus/antenna in the pic.

Clever dual use of the hardware.

So basically, if you want to respond to the IM/email you just received, you lose reception once you remove the stylus?

Guess you're only supposed to use the thumboard (I hate them). I would imagine though even a thumboard user would be faced with UI elements that require a stylus.

What am I missing here? Seems witty until you think into it about 5 seconds, then seems unecessary and dumb.

Anyone want to read more?

Well, it's gonna be a killer-device!
And i bet it's big enough
http://www.channelnewsasia.com/stories/singaporebusinessnews/view/136455/1/.html

Thanks for the link.

They say small is beautiful, and that is the philosophy behind Oswin Technology's new PDA phone.

But I don't think it is "big enough." That angle really shows how small the screen is. That may be fine for a phone or even a simple PIM, but I need at least a reasonable screen size for running the kinds of apps available for Palm (or WinCE). Maybe it's the middle-aged eyes thing....

Kinda reminds me of the Sony T630/7 with a little extra length. Visualize HVGA packed into that space. That would be powerful.

The Phone is a good size as it has a touch screen and the keypad is good size....

The developer were at CBIT and they are the First company to port Cobalt OS6 to a smart phone...

The Stylus is liek T3 stylus that means you can have a short or long stylus...

OS6 looks good even on a screen small as a phone screen, i liked it but i am more then happy with my Nokai 9500 at this moment....

Try this link instead ...

I never could get the link to work to Singapore. Try this one ...

Or try the Malaysian company branded version for size; not that the site offers any more pics nor specs:

Personally am not impressed by this unit. No Bluetooth essentially kills my interest in any PDA, PDA phone, or smartphone these days.

the web link for the developer...