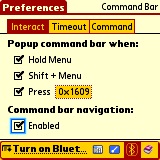 The Palm OS command bar is a feature that has likely gone unnoticed for many current Garnet OS smartphone users. It has its roots from back in the PDA days as a handy hidden shortcut that provided quick access to common program functions such as Cut, Copy & Paste, Bluetooth status and such by invoking a special stylus swipe. With the disappearance of a dedicated graffiti area, this feature largely fell by the wayside yet remained in the Palm OS. CommandBar is an app that can bring back the handy feature and gives you additional control over how its invoked and used. It installs as a preference pane and brings back and adds to the functionality of the forgotten utility.

CommandBar v0.5.5 is available now for $9.95 (it is currently on sale for $4.95). It comes with a free trial period and is compatible with all Palm OS Treo's and the Palm Centro.

Dammit, Ryan. You should have tweeted it as CommandBar APP. Tweet made me think Palm had actually provided some sort of UPGRADE for Palm OS 5.

Yeah, I guess I have some brain damage, to think that!

We've been telling you that for years, Mike.

I don't take advice from YOU, droolboy.

Come to think of it, no one does.

Anyone actually use this?

Juts wondering, does anyone actually use the command bar? Besides on archaic devices...

I've occasionally had good use for the classical command bar - especially in programs/screens that haven't been enabled for cut/copy/paste. Using Graffiti Anywhere you can pull up the command bar - often takes several attempts since you're working with "Graffiti" #2 rather than the real one.

Nice that someone's made a (beta?) utility to access the command bar, for the low, low price of ten bucks. I guess you can't fault the guy for providing a service and trying to sell it for that much, but it's more than I want to spend for a better way to reach this function. Maybe a buck or two and I'd buy it just to have it and support him.

It's really just another feature that Palm has unnecessarily crippled for some unknown reason. I guess this disproves the viewpoint that Palm is doing "nothing" - they've been busy removing functionality, that's for certain....

I don't know if you think the TX is an "archaic device", but I use the command bar all the time.

The two primary uses are cut/copy/paste and launching desk accessories (DA Launcher). I have a DA for quickly looking up words in a foreign language dictionary and for silencing my TX for a chosen period of time (very handy when heading into a concert or meeting). There are other uses as well.

What DA do you use to silence your TX for a period of time?

All the time, but I don't need this program to do it. Hobbyist Software's Butler can activate the command bar, and I have other applications which I load into the command bar (SnapCalc and SnapCalendar) as well as QuickApp which loads a user-defined menu of apps.

I did a mini review of QuickApp over on PalmAddicts.

>>What DA do you use to silence your TX for a period of time?

I don't use a TX (last "pure" PDA was a Tungsten C and Zodiac 2). Can't recall what I used to do before Handspring developed the mute switch and gave it to Palm to wreck.

Here's "Sound DA" I found through a simple Google search: http://www.freewarepalm.com/utilities/soundda.shtml, might fit your need.

I use VolumeDA (1.0.2) by Koichi Terada to silence my TX. It works great. My only complaint is that it lacks a one hour increment, jumping from 30 minutes to 2 hours.

Or you could use the free Treo Command Bar...

A user "bright2k" on the 1src forums posted a link to a free Command Bar Utlity that works great on my Centro.

RE: Or you could use the free Treo Command Bar...

...which is probably a hacked or beta copy of this one.