Comments on: A Look Back At the Qool QDA-700 Palm OS Phone 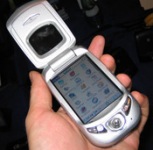 PDA247 recently acquired a relic of the Palm OS past and has posted an interesting retro review. The device in question is a Qool QDA-700 a Palm OS smartphone from 2004 that included a number of innovative features for its time but never seemed to gain much market acceptance. Shaun says in his video review (embedded after the break) that he purchased the device for the bargain price of £25.

The Qool QDA-700 was a Palm OS Garnet based smartphone based on a reference design by PiTech. It was first announced in Sept 2004 and later became available in limited quantities in Europe, the Middle East and Asia. The device included robust multimedia capabilities for its time such as a 1.3-megapixel camera, 2.8-inch color QVGA (240x320) display and a built in mp3 and mp4 video applications. It even featured support for Wi-Fi cards via its SD slot.

This was a phone I drooled for. Too bad it didn't come to the states. Pretty far ahead of anything Palm had as far as UI. With a few changes (thinner, 320x480) it would be far better than anything Palm sells today.

Two quick points. Firstly thanks for mentioning the video review.

Secondly, it was bought for just over £30 including postage (think I said £25 in the review) and the name is ShaUn:)

I don't know where you found it but I'm looking for one since 2006 ...
anyway if you feel like selling me yours, contact me ;)

Thanks for the clarifications Shaun. That was an interesting video.

PiTech also had another Palm OS design in the works, but it looks like it never left the labs:

8 inch color QVGA screen. What's that, about 1 pixel every quarter inch? I'm going to take a shot in the dark and say that's a typo.

I just got myself one of these really cheap off eBay as well :-D

The device is indeed VERY bulky, but has an incredible style a polish to it that I absolutely love.

You are using it in the US? What network are you using it on?

I'm from Canada, but I don't have any time-card to test it with at the moment, though I have been told it would work, though not as good as other phones since its only tri-band

I used one for a couple years in the US with AT&T. The missing band was an inconvenience but it worked well otherwise (SF bay area). Seemed to do quite well during trips to the east coast. Slightly idiosyncratic radio design and a bit slow to pick up signal when first powered on.

All that said, this has been my favorite PalmOS device by a good margin. Looks nice and feels really good in the hand. Finally wore out the resistive touch screen, a hazard of a keyboard-less device I suppose, so have switched to a Treo 680.

Could it really do Wifi?

If so, why couldn't Palm come out with the same thisn for their Garnet powered Treos?

What it likely involved was having to shut down the GSM radio entirely then power on wi-fi and then repeat the process to get it back into "phone" mode. Just because Garnet can handle BT + wi-fi simultaneously (on the TX & LIfeDrive) doesn't mean it can have a wi-fi connection going on top of a cellular one.

Also, keep in mind that Garnet can handle two wireless radios. So you can your choice between cellular + BT, cellular + wi-fi or wi-fi + BT. But you cannot have all three. This Qool is, by all indication, lacking BT (unsurprising given its age).

Nowadays many smartphones still lack wi-fi. But EVERYONE expects BT on even the cheapest dumbphones. Palm *COULD* do a BT-less Garnet Centro/Treo with wi-fi. But in this headset-crazy day, I think people would then gripe about losing Bluetooth capabilities.

No, it could NOT use any existing Palm Wifi cards. I've tried. I suspect when Qool initially stated the QDA-700 was wifi-compatiblr, they meant their SDIO slot is unrestricted, whereas many of the Palm Treos at the time had crippled and underpowered SDIO slots.

On an interesting note, on the QDA-700, when you press and hold the power button for like 2sec, then the GSM radio turns off completely, a VERY nice power-saving feature. Power-saving is a definite issue when the built-in battery is only 800mAh!

so many exciting phones in the news...

... and Plam Infocenter is getting retrospective?