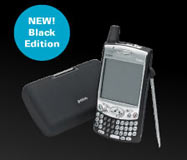 According to a message board thread on the Mapaland.org Palm forums, a special limited-edition batch of "Black Tie" Treo 650s have been produced for select markets in the Asia/Pacific region.

According to the poster and a e-mail announcement from Palm, the specs are identical to a standard Treo 650 save for a a special black styling and silicone coating on the unit's housing. In addition to the cosmetic changes, a multifunction pen stylus and the new Palm Treo hard case are also included in the bundle.

Shame they kept the chrome. I think an all-over black would have been much sexier.
Shame Palm don't offer different Treo colours as standard.

Remember one of the early rumors of the 700P was that it was going to be available in a handful of (tacky) pastel colors on Sprint...pink, blue, silver etc?

I wouldn't be surprised if Palm whips up a 700P "SE" in a year or so to try and keep the momentum going...

More interesting will be if someone starts selling battery door covers & replacement bodies for all Treo 650s/700s with this rubberized coating. That'd make a helluva nice mod! I'm sitting here playing with my new 700P (sigh, I took the plunge) and I am really wishing these two silver strips down each side of the phone had a bit more "grip" or texture to them--kinda like my old Motorola 2.4ghz home cordless phone did.

^^ I remember the extremely tacky blue antenna-less Photoshop hacks that were going round. Thank God we didn't wind up with that...

Treo's *are* too slippy in their current form. I've had many heart-stopping moments when I was worried it was going to slide off the desk/dash. The battery cover thing is a good idea; maybe Seidio could implement something on their reset-hole covers.

Oh, and welcome to the Treo club hk! Is the SSS as bad as you feared? How does the 700p stack up to other Palm PDAs, stability-wise?

Doesn't matter anyway. Changing the color and adding a fancy stylus doesn't make it worth the price premium that Palm will undoubtedly charge for it.

This is no more compelling than any other Treo 650. Come on, Palm! Show us some real innovation, as well as diversity of product. Smartphones aren't the only products people want. Many still desire a "two piece" solution.

"This is no more compelling than any other Treo 650. Come on, Palm! Show us some real innovation"

Yeah - like a Paris Hilton pink one or something. THAT would be "hot." Cutting edge, baby.

It seems when Palm's innovation stagnates, they start pulling these "Special Editions" out of their hats. Now that they've finally released the Treo 700p (what the Treo 650 *should* have been), they want to prove their critics wrong by continuing to try selling 650's to show that people will still buy a "Smartphone" with a dumb level of internal memory. And if people fell for the "Claudia Schiffer" special edition PDA, they'll probably unload a few of these Treos too.

Whatever... as long as there's sufficient stock of well-built 700p's available they can do what they want to the 650 carcasses sitting around.

So much for the low cost version!

How did the CEO (strangely, IMHO) clarify what "new" meant:

== "...In our conference call last quarter, I shared with you
== that Palm would introduce four new smartphones in calendar year
== 2006. When I say new smartphones, I am referring to a
== combination of operating system, new hardware design, new radio
== technology or other significant advancement..."

Dude, are you serious?

This is clearly a special edition of an existing product. Not a new one.

I understand it's important to bash Palm at every possible opportunity, but really. Pretending that this is what Palm was talking about when it announced new models is just ludicrous.

Well, it's not like Palm hasn't done that before. Remember the Claudia Schiffer "new" model?

^^ Actually, I don't. I'm just a callous, inexperience youth. Apologies if Palm have a history of this sort of thing, but considering it's a special edition that's only available in Asian markets, does anyone seriously think that this is one of the new models Colligan and Sagio have been rabbitting on about?

Well, Sagio's information has never really been confirmed, and some of it has been refuted--including the projected January release for the 700p and the March/May release for "Hollywood" and Lowrider. Not saying anything in favor or opposition to this theory, just noting.

Make it for $200 and call it lowrider, whip, vinewood, whatever.

I'll pretend it is a "new" device.

I think Palm counts "new" devices by each box they ship. They have wildly exceeded their promises - they've designed and shipped hundreds of thousands of "new" models!

I was going to post this in the forums but the persistent "forum login bug" put an end to those plans:

2006 is definitely a transition year for Palm. They're transitioning out of the PDA game and into near-exclusive smartphone business. They're also transitioning from a single decrepit OS (FrankenGarnet) into a dual WinMob/Linux something or another strategy.

While we're looking into the crystal ball, my predictions for the four new Treos for 2006:

As far as these "special editions" are concerned, I'd just like to see Palm offer the "blacl rubberized" battery door for Treo 650s & 700s. It'd be a nice way of distinguishing between your Treo & a coworker's as well as a cosmet add-on that actually makes some sense. For people who like to carry their Treos "naked" replacable body panels can guarantee $ in Palm's pocket as well as someone's Treo always looking fresh.

I still maintain there will be two final POS OS 5.x PDAs (three at most):

-TX will carry on unchanged. MAYBE a TX2 will be released with the rumored 4gb internal flash. Or they could call a TX2 a "mobile manager" instead of a traditional handheld. The MicroDrive-based LD is already dead in the water.

just want to clarify that the source is MaPalad.org - the Philippines Palm Users Group