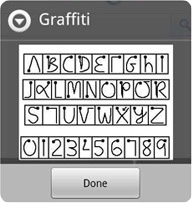 Exactly one month since their last update, Access Co. has released yet another new version of their Graffiti app for Android devices. Now bearing version number 2.0.4, neither Access' website nor the Android Market change log for the Graffiti app lists any major details about the new version's improvements. More than likely, this is just another bugfix release for the wide number of variety of devices recently receiving updates to Android 2.2 (aka "Froyo").

A quick test run on a Motorola Droid X running 2.2 revealed no major changes to the app, though each new revision seemingly improves the performance of the character entry (especially for punctuation) and word prediction. Graffiti strokes are now instantaneous and display no lag whatsoever--kudos to Access for diligently working to make continued improvements to this great tool for longtime Palm OS fans!

The free 4.05Mb app can be downloaded from the Android Market for all devices running Android 1.6 or newer with full Market access. Access' informative Graffiti page can be found here.

This might be useful if the my droid incredible came with a place to put a stylus. Doesn't this need to be used with a Stylus?

Nope, you can use a stylus (but it has to be one that works with capacitive touchscreens) but Graffiti for Android is designed to work with a fingertip.

if you see a stylus they blew it.

Stupid HTC Aria ROM update has fouled up my access to the marketplace. Graffiti for Android is one of the apps that no longer shows up.

AppBrain.com tells me its there, and lets me add it to my list. But when I go to install, the Android Marketplace says that the "requested item could not be found."

I'm not the only one experiencing this, and it isn't just the Aria. I've looked.

I didn't say I had a problem sideloading.

I said I had a problem DOWNLOADING the updated APK files when the danged things don't show up in the Marketplace.

Why not ask hkk or someone to email it?

Because I'm looking for a solution that doesn't make me dependent upon tracking down someone who happens to have the app I want and who would email it to me.

that's what forums are for, silly.

Here you go, you can DL the .apk straight from here. No, it's not THE most recent version but it's from August so it's 2.0.3. Enjoy!

that's kind of the point of forums.

hkklife - Your assistance is appreciated. (I'd already googled and found the same file, though. Sorry.)