Comments on: Sprint Stores Will Open at 8AM on June 6th 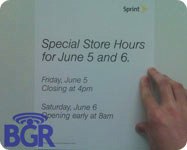 The Boy Genius Report has just posted documentation that Sprint stores will be opening early on June 6th for the launch of the Palm Pre. Stores will close early on Friday, June 5th at 4pm presumably to prepare for the Pre onslaught.

On launch day Saturday, June 6th, Sprint retail stores will open at 8am. As noted before Sprint will sell the Pre for $199, after a 2-year service agreement and $100 mail in rebate. It's unclear at this point if Best Buy or Wall-Mart locations offering the Pre will have any special hours or promotions for the launch as well.

How many people are waiting for the Palm Pre? Sure, geeks love it, but I don't think too many people are calling it the "jesus phone" like they were during the drumbeat to the iPhone launch 2 years ago.

I for one am waiting for a GSM version, or the Centro replacement that has been rumored.
Current PDA: Treo 600. Lineage: Too long to list...

Both Palm and Sprint want-need this to be a big event.

There's been such good press and so little information, I think lines are a sure thing. Americans like big events.

Not even the iPhone itself gets called the Jesus Phone nowadays. Actually, one of the best measure's of Palm success in promoting the Pre is the fact that you can't hardly read a story about the iPhone anymore that doesn't mention the Pre as well. Case in point, if you go type in "iPhone" into Google News (like I did just now), the first batch of stories you read are actually all about the Pre.

We won't know how well they've reached the masses until launch day of course. But Palm has definitely stolen a big chunk of mindshare in the press.

freak, lay off the pcp. I googled iPhone and I got a single link to an article discussing both palm and apple. the rest were links discussing the iPhone.

palm shouldn't need to ride the iPhone's coattails for publicity. that makes the pre look (rightly) like an iPhone wannabe.

jeez, you really are a hack!

by the way - I should be clear - I searched both google and google news - one article discussed both pre and iPhone.

Taken yesterday afternoon on my Eee when I made my post. (Because I just knew that some horrible Internet person like you would take issue.)

freak, the pre has been getting good press in the geek publications, and notice in the mainstream press, but that's not comparable to the kind of mindshare the iphone has. Your screen shot, with one article and associated links, is not very convincing.

Anyway, the Pre doesn't have to beat the iPhone. Comparisons really are silly. It just has to sell enough to keep Palm around and innovating.

Your screen shot, with one article and associated links, is not very convincing.

Anyways, totally agreed on the "no need for competition". I was just observing that the iPhone is no longer really thought of as the perfect "jesus phone".

>Actually, one of the best measure's of Palm success in promoting the Pre
>is the fact that you can't hardly read a story about the iPhone anymore
>that doesn't mention the Pre as well.

So all of those articles that mention the iphone also mention the Pre? Not at all - please stop exaggerating. We'll see in a few weeks if the Pre can be something more than a third rate iphone wannabe.

Palm may be looking for cheap press by releasing the Pre so close to Apple's WWDC, but it could blow up in their faces...

The iPhone stopped being the Jesus phone the day it was released. That name was always more of a joke at the hype.

It goes without saying that the Pre is going to lose its halo too, as soon as people have real world experiences with it. Right now a Pre has never crashed, the battery lasts forever, syncing works perfectly, there's never any lag, the interface is free from annoying quirks, and the chicks dig 'em. The day after release we'll be whining about every tiny detail.

> ...It goes without saying that the Pre is going to lose its halo too, as
> soon as people have real world experiences with it. Right now a Pre has
> never crashed, the battery lasts forever, syncing works perfectly, there's
> never any lag...

There are a few posts starting to appear on TreoCentral, for example, that suggest the halo, while not going away, might be getting a little tarnished here and there. Of course, maybe those posters are simply lying.

I wish to buy 4 Pre. I will be in NYC in june and I ask if it's possible to buy without sprint plan and if works in G3 with no brand. Thanks for reply
PALMSTYLE

The Pre that is coming in early June is a CDMA phone, not a GSM phone.

Thanks a lot and no news when it will be sold in Europe?
PALMSTYLE

No, no official news.

No official news. But sometime around August is likely, if you go by the rumoured Australian and Canadian release dates.

> No official news. But sometime around August is likely...

Yeah, so was the March 15th American release.

I'll go with official words, thanks.

5 Pres per Best Buy, 5-10 per Sprint store, certainly no more than that per "select" Walmart.

And not much more.

that is laughably bad.

It'll be interesting if someone somewhere shoots this down - sure are a LOT of folks piping up with "I called and they said..."-type comments, though, that are more confirming than anythign else.

I just visited a mall this weekend that had a real Sprint et al store and there's a BestBuy real close to there, too. Maybe I'll give'em a call for some first-hand datapoints.

it should be a minimal order - pre is unproven, webos is unproven, the country is in a recession, and they probably want to gauge consumer reaction to the pre and wait for the bugs to get ironed out before ordering alot.

We keep seeing comments from Sprint on marketing push (or lack of) being a new factor- Perhaps this low production run (if rumor is true) is in part to save/re-allocate money for Palm's own marketing bash after hailing the Pre as so wildly successful that it "sells out" at initial launch. After they get a true read on demand, they can re-allocate $ for production. More buzz this way too-silly though. Palm's always been good at moving inventory, but I can't think of a time they've executed a launch elegantly

IMO, for too long Palm has looked away from the community that built itself around their product and joined the cold corporate perspective that "customers are commodities too"..

End of Contract with Sprint- to become a "Pre-vert" or go Android?

Mike, I been lucky:-) I've not been involved with apple products since the 60s so I don't have the problem that many seem to have with the way they run their company. When palm abandoned palm OS I switched to iPhone (iPod Touch) and I never looked back, it has graphic capabilities that even palm OS can't come close to and is built with quality that I've never seen in a Palm product (LifeDrive was pretty close).
I can't even say honestly that I hope Palm succeeds, they turned their back on most of us forgetting that we helped make Palm. Personally, I developed the flashing indicator light (talelight, even gave Jeff one;) before palm incorporated it, the vibrating alarm (talevibes) before palm incorporated it, emergency charger (for V & Vx) before the whole industry started making them ;-)
I can't say I ever made more than 50 bucks from writing Palm software but now I get a few deposits a month from apple and they treat me a hell of a lot better than palm ever did. Palm had a lot of rules for hardware developers but I never signed any of their agreements or I would have been very limited in what I could do.
I still follow palm's progress(?) on PIC but it's kinda like watching the band play on the Titanic.

I've not been involved with apple products since the 60s...

Yeah, those days are pretty much all blurred together in my old brain ;-)
Tech Center Labs

Funny how some people have thought No Pre = Buying iPhone.

I *still* want a Pre and I'm hoping this crap can be resolved before Launch Day.

I have my LifeDrive data to rescue -- and an iPhone is no damned lifeboat for it!

1. On Verizon and/or in a non-phone device

The first 2 are must-haves. The other 3 are the typical Palm aggravations that I could work around like I do now.

Why are you so worried Mike? It's been stated repeatedly that Palm is going to have a one-way Palm PIM data import tool for your legacy stuff. Of course, knowing Palm, they might do something ridiculous such as excluding memos & tasks and just have calendar and contacts entries transferred to the Pre etc.

Storm in a teacup:

This is what I'm trying to post there (the damned wheel keeps spinning!):

Listen, you guys need to get this straightened out. And given the crap Palm served us in the past, you have a Very Bad Rep to overcome here. I won't believe what *you* say. It has to come from the three guys who *founded and then resigned* from PreDevCamp.

Fix that, and I'm go again to buy a Pre. And I won't even be mad if I wind up waiting a month or two due to shortages, OK?
http://prepoint.wordpress.com/2009/05/21/new-palm-old-stupidity/

And someone pointed out that everything except two words were said: "I'm sorry."

"Love means never having to say you're sorry."

It's obvious that Pam really loves those guys. ;-)

Biting the hand that feeds them.