The moment that avid Palm-watchers everywhere have been anticipating since January 8th is finally here. The official Sprint press release has just arrived, revealing final Pre pricing and availability information.

Saturday, June 6th is the confirmed nationwide release date, so Palm and Sprint are definitely looking to steal some of Apple's WWDC thunder. The Palm Pre will cost $199.99 with a with a two-year service agreement and after a $100 mail-in rebate.

As we reported earlier Best Buy will definitely be on board for the Pre's launch but not on a "trial" basis as previously rumored. In addition to Best Buy, the Pre will be available in Sprint retail stores, Radio Shack and "select" Wal-Mart stores. 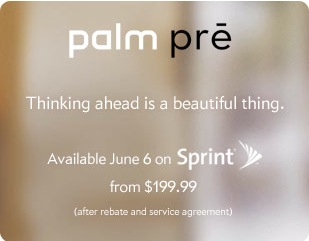 "The argument that you need one phone for work and another phone for play, or that you have to make compromises between business and lifestyle productivity, is over," said Dan Hesse, president and CEO of Sprint. "With Pre, compromises of the past are history."

"The Palm Pre takes full advantage of Sprint's Everything Data plans," said Avi Greengart, research director for Consumer Devices at Current Analysis. "The Pre has been expressly designed for multitasking among multiple web pages and applications. It also builds on Palm's heritage in PDAs by managing your digital information  whether that's on a corporate server or on the web." 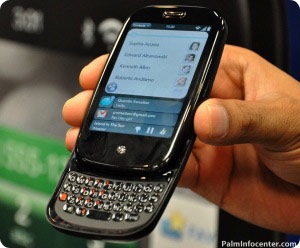 "The Pre's dynamic 'activity cards' approach to handling and navigating multiple applications is a great advance, but the core breakthrough is the integration of information across multiple applications on and off the phone," said Andy Castonguay, director of Mobile & Access Devices Research, Yankee Group. "With social networking and messaging being so important to consumers, the device's new Palm Synergy' functionality  which gives Pre the ability to automatically pull friends' contact details, messaging addresses and personal calendars from different applications online and on the phone  will greatly simplify people's ability to communicate with their friends and colleagues the way they want."

The Palm Pre phone will be available exclusively from Sprint on June 6 for $199.99 after a $100 mail-in rebate with a new two-year service agreement on an Everything Data plan or Business Essentials with Messaging and Data plan. There is currently no word on pricing for customers who wish to purchase without a contract.

hells to the yeah
gonna hit up best buy in manhattan early on saturday:)

wonder if they'll make it so you don't have to mail in the rebate to get the extra hundred off?

There is much I like about the Pre, but frankly I plan on waiting to buy one...

Waiting until they realize everyone doesn't like the concept of the "Cloud" and incorporate an easy sync to a new Palm Desktop or at least Outlook.

Waiting until they add a SD card of some type. my phone is my MP3 player after all. Plus I like to keep a backup on my card with me at all times.

Waiting till an unlocked phone can be purchased that will work on the Verizon network. Sprint is awful in my region.

Since, I believe, 2006 or 2007, BB has basically "banned" all MIRs in their stores. You either get an instant rebate or you pay MSRP (or in a few cases, higher than MSRP). Either way, when BB does have something on sale with a sizable instant rebate, it's usually a pretty solid deal. I scored a new Sharp LCD TV that was analog tuner only for a superb price right when they started shifting the lines over to units with built-in digital ATSC & QAM tuners thanks to a considerable instant rebate.

So BB will probably do one of 3 things:

I also wouldn't be surprised if Palm & Sprint act a bit greedy and keep the number of Pre available to places like BB, Radio Shack, Amazon, Letstalk.com and indirect stores etc. to extremely small quantities in order to drive people into Sprint corporate stores or sprint.com.

Just charting the history of Palm-branded devices, BB has definitely been the *best* place (from a convenience standpoint and a no MIR hassle standpoint) to buy a new device on a subsidized 2yr contract. They were offering $40-$50 Centros out the door back when Sprint & Verzon were still pushing them for $100-$200 with MIR silliness. And BB remains the only place where you can get a subsidized AT&T Treo Pro right now.
Pilot 1000->Pilot 5000->PalmPilot Pro->IIIe->Vx->m505->T|T->T|T2->T|C->T|T3->T|T5->Zodiac 2->TX->Verizon Treo 700P->Verizon Treo 755p->?

There is much I like about the Pre, but frankly I plan on waiting to buy one...

Waiting until they realize everyone doesn't like the concept of the "Cloud" and incorporate an easy sync to a new Palm Desktop or at least Outlook.
[...]

Same here. Beside the fact that I'm in Europe and want/need at least GSM (or rather UMTS), I have a hard time imagining they'll succeed over here without such a directsync solution (i.e. without an intermediary like Google or setting up an Exchange server).

So, when do we get a GSM version. I want my phone to work when I travel!

I mean seriously. Even the places that used to take them seriously, now you just go to a website and stick a code from the receipt onto a form.

The carriers LOVE 'em. Now, I am not the world's biggest Best Buy fan but it is a splendid place to buy a new phone from if you are out of contract or eligible for a renewal. BB has banished all MIRs from their stores and they only do the instant rebate thing nowadays.

I know why the mail-in rebate is there. It's a backup viability plan. In case things don't go according to plan, they can lose a few of the MIR's, which will serve to increase the average amount of profit per device sold. For all intents and purposes, this phone is $299 with contract. It's a reasonable price, although it's a bit expensive for a phone with only 8 GB onboard.

And for the record, I totally called the fact that the Pre was going to be introduced immediately before the iPhone 3.0. They wanted to maximize the time they had to work on it, yet still release it before the next generation iPhone had a chance to make a splash.

There are many reasons companies use MIR's. Some of those complement quite nicely into Sprint and Palm's current position:

Studies have shown rebate redemptions range from an crazy low 0f 5% to a high of 80%, with tech products falling into the 50-70% range depending on how they are executed. This would fit Abosco's note of helping initial profit per unit. The effect also contributes to the next point-
Depending on how rebates are timed, the company may not have to account for them until the next quarter after redemption- allowing initial sales/income figures to look substantial better.
MIR's have the appearance of not undercutting full retail prices of parallel product lines (although given Sprint's dizzying rebates on so many of their smart phones, it's hard to figure out the placement and strategy there)
Warranties and insurance costs are calculated and priced based on "full" retail replacement cost, creating less-than-obvious profit center despite a lower up-front cost for the consumer.
Plain-old customer appeal in trying to get folks to take a chance on a new product with a perception of and incentive of "temporary" value.

Right on to Palm for delivering per expectation, assuming quantities are ready to back it up. It will also be fun to see what Apple counters with on the 3.0 hardware and final software refresh.
End of Contract with Sprint- to become a "Pre-vert" or go Android?

So you're saying this MIR is another smoke-and-mirrors accounting trick to try to make Palm look like it's on less shaky footing? I could see that. Thanks for the input.

Mail-in rebates: once burned=ignorant; twice burned=stupid. I will never, ever, ever, ever, ever buy anything with a MIR. Period. Now, if Best Buy gives the rebate instantly, then that's another matter. Smart marketing.

abosco wrote:
So you're saying this MIR is another smoke-and-mirrors accounting trick to try to make Palm look like it's on less shaky footing? I could see that. Thanks for the input.

Your usually astute reasoning is subtly flawed on this point, it's Sprint offering the rebate, not Palm.

Although the point is likely made moot due their intertwined fates on the success or failure of the Pre. Sprint a bit less so, but perhaps not for long given their customer attrition.

I don't think there's any debate that Palm is on "shaky footing" (barring an acquisition) with anything outside a wildly successful launch exceeding everyone's expectations. Your past points on Apple's foothold are undoubtedly valid.

I think it incredibly unlikely that much, if any, of a percentage of Apple iPhone/Touch owners will be swayed into jumping ship to Spint, Palm or Pre, but I'm also not sure given the overall market of smart-phones and/or the long-commoditized PDA market (referencing the potential license of WebOS), they have to do so to become a viable company again.

I'm one of the first to kvetch about their past mistakes in support, hardware and the failure to evolve their software in a realistically timely fashion to stay competitive, but that bias doesn't go so far to be bent towards a desire to for their failure, or even to count them out of carving a dedicated niche in the overall user base to sustain them a while longer.
End of Contract with Sprint- to become a "Pre-vert" or go Android?

Looks promising... If I buy a Pre second hand in the future, can I use my SERO plan or do I have to get an everything plan? How much do these plans cost?

I am on a month-month of SERO-level service. Would it be possible to buy an unlocked Pre and activate it on that month-month basis (cost + service)?

As it stands now, the answer to that question is 99.9% likely "NO". Sprint is going to do everything they can to get grandfathered SERO users onto an "Everything" plan one way or the other. You can be assured with an eagerly anticipated handset like the Pre they won't let anything slip through the cracks.

...now I only need to know when it actually arrives outside of the US as well...

at least a couple of months :-(

August. Not too much longer, thank God. My Centro is less and less appealing each day...

Verizon, are you listening?

I hope this baby takes off so Verizon sees the light of day.

The Blackberry Storm is not going to hold its own against this unit.

HURRY UP GSM so we can all piss off the iPosers !