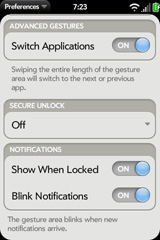 The recently-leaked WebOS 1.2 has sent the webOS-internals group into a minor tizzy today, with IRC super-sleuths Theo Ottesen and Michael Wand (theo on IRC and michaelw9 on Precentral) making two very intriguing discoveries in the code. One is great, and one is... slightly concerning.

Good news first: LED notifications are on the way! The much-requested feature has been discovered within the "securityconfig-scene.html" file, which contains the following info-text: "The gesture area blinks when new notifications arrive." The feature is currently commented out, but Michael was able to activate it by simply uncommenting it. The option for LED notifications is then added to the Screen & Lock settings page, and once turned on will set the LEDs on the gesture area to pulse on and off when a new notification arrives - new SMS messages, missed calls etc.

Kris deserves mad props for posting this for me at 4.30am.
I write here sometimes.

Off to bed with you now young man! /mother

Else I'm going to feel guilty for ruining your sleep. And my feelings are very important.

Sounds much more restrictive then what went on with google voice Freak.

>Hopefully Palm only intend to use this power for good, not evil - i.e. by
>removing apps with show-stopping bugs or malware.

You'd best hope so - however there's nothing saying that this can't be used to delete free apps or apps that don't meet Palm's development guidelines.

Weren't you the guy who said the Pre was so much more open then the iphone??

So Sprint makes Palm remove "My Tether". The next day "my tether" is released with a new ID.

Also you keep a copy on your desktop to reload.

Seems the only way this would work is if Palm is removing paid programs from the palm store not hacks...how would they pay you back for what you bought some where else?

If the fiasco with the kindle a few weeks back is any indication, It would be very dangerous to actually use the remote removal feature... Chances are its there *just in case* and not meant for frequent use.

Weren't you the guy who said the Pre was so much more open then the iphone??

Troll-bot, you need to get your logic algorithms debugged. How do you think this news was so easily discovered in the first place? (Hint: it wasn't black magic.)

Actually, I'll answer for you, since your programming is liable to get it wrong anyway: it's because webOS is so open. That same openness is also what will eventually lead to an easily-installed homebrew patch for anyone who wants to block this.

Google and Apple have similar powers regarding their own app stores. I don't like it, but these policies have no bearing on the open-ness of the underlying operating system.
Tim
Sometime PIC blogger
Treo 270 -> Treo 650 -> Treo 680 -> Centro
I apologise for any and all emoticons in my posts. You may shoot them on sight.

There's no such word as "open-ness"

If, however, you mean "openness", then you were the guy who said the Pre was so open that anything could be developed for it and Palm wouldn't stand in developers ways (unlike Apple).

The Pre (like the iphone) can have anything developed for it, but Palm has the ability to delete what they don't like.

Also, last I recall, Mojo is still wired to javascript (hahaha). Not as open as other platforms.

>I don't like it, but these policies have no bearing on the *openness* of the
>underlying operating system.

No, but it has a bearing on what can be developed for the (allegedly) open platform - if Palm has a kill switch ready to be pulled, then that will limit what will be developed - if they start using it.

Since anyone with even half a brain can debunk that rubbish you just spewed all on their own, I'm not even going to bother.

Enjoy having the last word! I suggest something along the lines of "i'm right and you can't win ever ever ever, la-la-la-la-la".

it's easier for you to be childish than actually answering my statements.

you might be evolving though as even you admit that the pre's kill switch isn't a good idea.

Go here for some reality: http://www.precentral.net/webos-12-has-beginnings-app-kill-switch-world-doesnt-end

Theo has posted a downloadable .txt in the Precentral forums:

If you need instructions on how to apply it, you can find them on the wiki: http://www.webos-internals.org/wiki/Applying_Patches

Just out of curiosity, why do we have "freakout" and "Tim Carroll" PIC IDs? Are you gunning to be the in-house version of TVoR? I'm going to report you to Ryan!

No, I registered my real name to lend an air of semi-quasi-pseudo-professionalism to comments that I want to link to my articles. freakout remains for everything else. :D

"Back in the day", I registered as one of the Surur names (sr5 if I recall correctly) just to have a little fun yanking his chain. Hmm, I wonder if Surur is still as much of a WinMob fanboy as he was back then.

I liked Surur too, for the record. (freakout raises a glass to the PIC fallen)