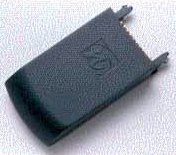 With the announcement of the m100 Palm also indicated that several snap-on devices would be available shortly. Well, here's the first one I have found; the MemorySafe by Northstar Mobile.

MemorySafe is a 1" square plug-in device that connects directly to the serial port of a Palm m100, Palm III series, or Palm VII series. After you install their driver, you can move individual files or backup your entire Palm, if you have enough room. There is a 2 MB version for $50 and an 8 MB version for $65.

Northstar Mobile is a division of Northstar Systems. And from what I gathered on Northstar Systems web page, it appears that they are the makers of the Palm cradles, the Palm connector designers (serial ports), and Palm cable manufacturers. Looks like they are moving from a Palm supplier into the retail market, great news for all of us! I wonder if the MemorySafe will eventually become Palm branded for the m100?!

Great! A FlashPlug clone for half the price!

Ummm, not so hot.

Yes, you can use FlashPro and install the driver into FlashRam (Which is what the makers of the Flash Plug suggest you do with their device's driver/access software), but if you've got flash, why not just backup to that?
I realize that you can't back up 8MB of RAM to 2MB of flash, but...
(Checks pilot) [ Address(197 Records), DateBook(262 Records), ToDo(51) and Memopad(128)]=130.9kb - Throw in some other stuff (NetworkDB, ConnectionDB, some pref files) and it's 135kb - If you want to be cheap like me, compress it with PalmZip(stored in flash), and it's 72.9kb

At best, I think this is a very specialized solution. At worst, well, at worst you're stuck half a continent away with a brain-dead machine, trying to remember which hotel you're booked at.

For the past few weeks, I've been going back-and-forth with Palm, Inc. over the infamous digitizer recognition problem that some IIIc's have when the screen brightness is increased. I'm currently on the fourth replacement (and I'll keep going until they get it right!!!!! Grrrr...).

I keep a copy of the FlashPlug driver (FlashCmd) on my wife's Workpad c3 and I can beam it over to any unit I want to use the Flashplug with. That way I don't need to be sitting at my PC waiting and waiting for the hotsync to restore all of my backup files.

Basically it adds a measure of convenience and shouldn't be viewed as a universal backup solution. Besides, I have a TON of registered apps, and I dig being able to restore everything perfectly from the Plug without having to re-register them all. If I used only Flashpro (which I do use and love)I wouldn't be able to do that.
So I'm happy with it, but of course, your mileage may vary...